Our editors are constantly swapping in and out of cars they’re evaluating, and sometimes, like most car owners, they leave messes behind. Some are parents whose kids leave behind crumbs from snack time, others are pet owners whose furry friends leave behind follicles embedded in the carpet, and sometimes it’s just simple dirt and grime from treks across our home state of Michigan and other parts of the country that get our test vehicles dirty. We’re on the hunt for the best way to clean up those messes, so we gathered up seven cordless handheld vacuums from popular brands to see which one we’re signing up for duty to get the job done.

We put the vacuums through five tests: We crushed Cheez-Its and Cheerios to see how well they’d suck up your kid’s messes—or yours. Our local Petco provided us with a trash bag full of dog hair (no animals were harmed in the evaluation of these vacs) that we rubbed into carpet floor mats. And we used potting soil to imitate dirt and debris that’ll get tracked into the car. To test suction power at each vacuum’s strongest setting (some have two modes), we filled Ziploc bags with marbles, weighing five grams each, and recorded how many they could pick up. Lastly, we test the sound level of each car we test, so we used the same equipment to see how loud these vacs are. During our testing of these handheld vacuums, we found that motorized brush tools are the only attachments that can truly pick up deep-seated pet hair, and the Multi Auto comes with one included. We used this vac to clean up debris the other vacs left behind during our tests. Enough said. That’s not its only advantage, though. It also has an extending hose nozzle—and other helpful included attachments—that helps it maneuver in, under, and around seats to find runaway dirt and debris. It also has a user-friendly handle and flashlight to make it even better for using in the car. The Dyson’s carpet cleaner motorized brush is good for cleaning the house, too, making it the most versatile vacuum we tested, but it isn’t as small as the Bissells or the Shark UltraCyclone’s brush attachment, making it difficult to use in the car. Lots of scrubbing is required with the other two included attachments to clean everything up, which it does successfully, and in Boost mode (its strongest setting), the battery only lasts about six minutes. We give the Shark UltraCyclone a silver medal because of its strong motorized brush attachment, which makes it easy to pick up pet hair and suck up dirt, but it isn’t as versatile as the Bissell Multi Auto. The included scrubbing brush makes more of a mess with snacks, and the crevice tool is a bit narrow, though it did an adequate job sucking up snacks and dirt. The name says it all. The Pet Hair Eraser is the best handheld vacuum if your pets lose hair like Britney Spears in 2007. However, it’s really only good for deleting pet hair, which is why we gave the Shark UltraCyclone Pet Pro+ the second-place trophy. An odd flap in the nozzle makes it hard to suck up food messes, and it failed to pick up any Cheerios. You seem to always drop french fries and other small snacks in between the seat and center console, right? The DustBuster’s extending, thin nozzle is good for getting multi-year-old fries out of there, but you’ll likely need to approach from the back seats, and we found that the extender doesn’t stay put as well when trying to cram into tight spaces. You’ll have to scrub a bit to root out the dirt and debris from the carpet, too, and pet owners should not buy this DustBuster. However, there are models available that come included with a powered pet attachment. At the vac’s strongest setting, which only picked up 52 marbles, the battery lasts about 20 minutes. We’d recommend this vacuum only if you drive a Smart. Its tank is so small it couldn’t even hold an ant’s crumbs. Okay, maybe that’s an exaggeration, but it’s really small. It surprised us with how strong its suction power is, though, picking up 224 marbles, but we were disappointed at how pet hair gets stuck on the bottom of the pet tool and doesn’t get sucked up. It looks cool, though. Even though the DeWalt shop vac has strong suction power, completing the job takes a lot of scrubbing because it has no attachments to help get the job done. The large tank and hose attachment help keep it in the mix, but it wouldn’t be our first choice. And it’s an awkward shape and expensive. 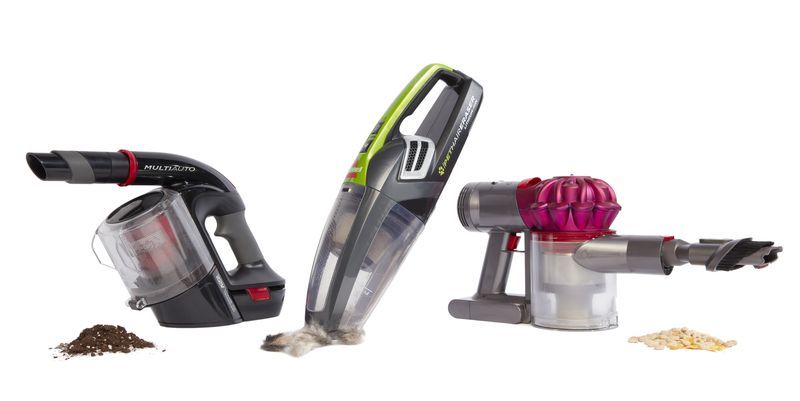