The GT63 S was totally stock, says AMG, and was equipped much like our most recent test car: with the optional AMG Aerodynamics package and track-focused Michelin Pilot Sport Cup 2 tires. The driver was AMG development engineer Demian Schaffert. The company put the 2.3-second lap-time improvement down to subtle revisions of the 2021 model’s suspension.

Manufacturers have long competed for production-car, lap-time glory on the Nürburgring’s 12.9-mile Nordschleife circuit. Recognized as the world’s most challenging racetrack, it snakes through the forest near the town of Nürburg in the heart of the Eifel mountains. Officially, the track has 73 corners, but some say adding the lesser twists and kinks that a driver must navigate brings the total to 100 or more. A typical road-racing circuit has 10 to 15 turns.

The track’s hilly topography—there’s 1000 feet of elevation change across its distance—and humpy surface throw every type of corner at the cars and their drivers. Speeds for powerful passenger cars like the GT63 S range from about 40 mph in the slowest turns to 180 mph or more on the long back straight. The high speeds, hard braking, and sine-wave pavement challenge suspensions, brakes, powertrains, and tires. Weather can be a problem as well: the track is so large that it can be sunny at one end but rainy at the other. Even on a cloudless day, parts of the track might be damp from morning dew, making record runs difficult. The official track website recognizes records in 12 categories. Seven are for production vehicles: mini/sub-compact cars; compact cars; mid-size cars; luxury (executive-class) cars; sports cars; super sports cars; and SUVs/vans/trucks/off-road vehicles. There are also categories for race cars, prototypes/concept cars, and two categories for EVs. The site has records listed for most of those classes. While the GT563 S is an undeniable rocket ride, consider that the production-car record holder, a Lamborghini Aventador SVJ, lapped the circuit at 6:44.97, an amazing 42.83 seconds quicker than the AMG sedan.

The timing process has changed slightly in the past several years. About two years ago, track management revised how flying laps are timed in a way that has added roughly 761 feet and several seconds to a lap. That means earlier record lap times are not strictly comparable to more recent ones. But the times set by the Panamera and GT63 S are. Which means for now, the great white shark rules the ‘Ring. 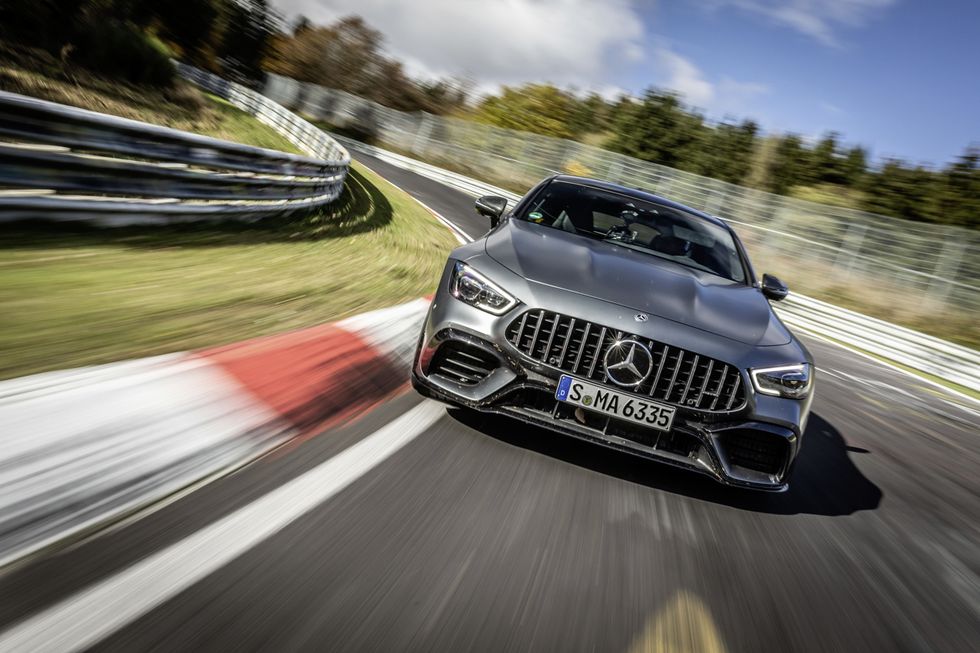