The saga of the Golden Ray continues. Once a simple cargo ship plying the seas, the 656-foot-long vessel made the news in September 2019 when it capsized off the coast of Georgia near Saint Simons Sound with around 4200 new vehicles on board. It’s been sitting on the shallow ocean bed since then while plans to extract the ship and its contents from the scene were developed and, now, finally, implemented.

That’s why, all through November, salvage workers were getting ready to slice the ship into eight smaller pieces in order to move them back to shore. A giant chain powered by two large engine made the first cut through the keel this weekend. This work required a giant piece of equipment called the Versabar VB 10,000 crane vessel that was first built a decade ago to help with oil rigs damaged in hurricanes.

This enormous work vessel is made up of two barges with two truss space frames between them and is able to lift heavy wreckage out of the water so it can be loaded onto other ships and carried away. The VB 10,000 can lift 7500 metric tons, and it’s estimated that the first section of the Golden Ray weighed 6000 metric tons, with all sorts of cars and sediment inside. Once lifted in the air, the first cut slice of the Golden Ray was placed on the barge Julie B and taken to Port of Brunswick before eventually heading to a recycling center in Louisiana. It wasn’t easy work. During all of the work and commotion this past weekend, an SUV fell into the ocean from the large chunk of the Golden Ray that was lifted in the air. It was not the first to fall, and the salvage team has installed a giant net to catch things like this. Smaller chunks of debris have also washed up on nearby shores and oil-skimming craft prowl the waters around the wreck to clean up any spills. This kind of unusual activity is bringing out the gawkers. There’s a 200-yard safety barrier around the wreck, keeping the sightseeing boats and drones all trying to get good views of the situation a safe distance away. A Saint Simons resident told local news station WJXT that viewers can see distressed vehicles from shore. It’s not just locals who are interested in the Golden Ray, which was only two years old when it capsized. The Brunswick News says documentary filmmaker Josh Gilligan is making a movie about the wreck and salvage mission. “The size and scope of it is just unreal,” he told the News. We can’t wait to see his finished work, but at least we have some local news footage to watch until then. 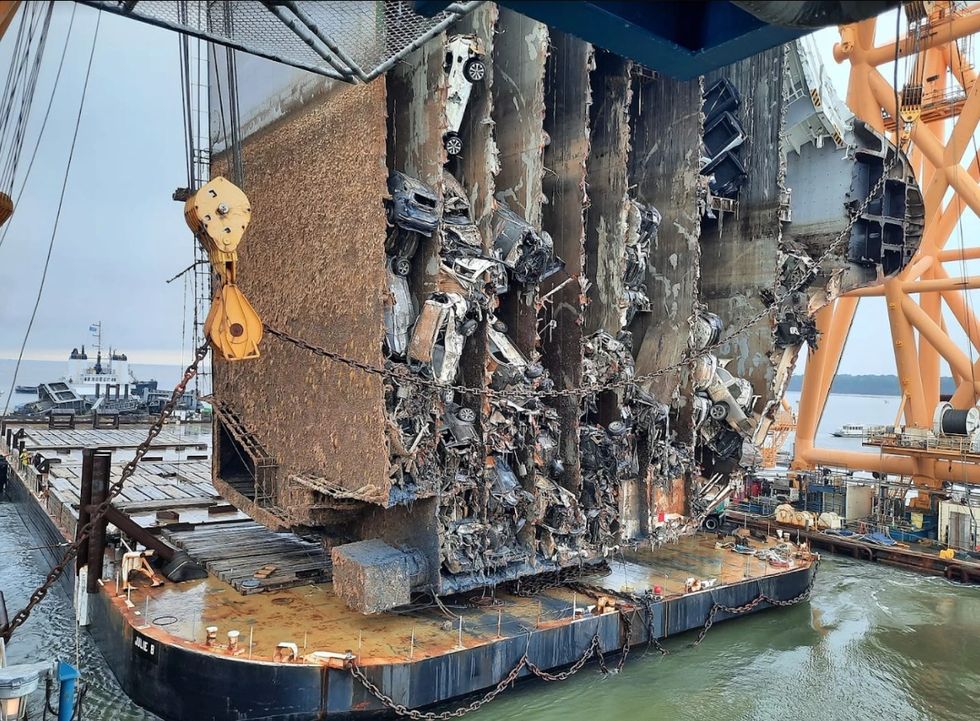