AN A4 AMONG THE DEER

Handed a new Audi A4 for the day, we wanted some twisty roads to see where entry-level luxury stands. Since Michigan is nearly curve-free, we called up Adam Franco’s Curvature map. It searches the world’s 10 million roads and identifies the best twisties. Looks cool, too. In 10 minutes we laid out a four-hour loop in northeast Ohio that proved Audi still knows what it’s doing– both materially and dynamically, and while dodging way too many deer on Ohio’s backroads. Need someone to figure out how to map those.

THIS WEEK IN SHEETMETAL

BMW cannonballed back into the EV pool with the 2022 iX SUV. About the size of the traditionally powered BMW X5, the iX puts a motor on each axle to produce roughly 500 horsepower. BMW is aiming for 300 miles of EPA range. Was that all BMW unwrapped this week? No. We’ll come back to them in a bit.

The revamped 2022 Hyundai Tucson is a whopping 6.1 inches longer. It’s also wider, taller, and it comes styled with more creases than an origami unicorn. An N-Line model is on the way, too, and, based on its wheels alone, should stand out in the segment. Ford debuted its full-sized 2022 E-Transit. There will be eight variants starting at $45,000, each with a 67.0-kWh battery powering up to 126 miles of range from a single motor on the rear axle.

The Ferrari SF90 Stradale Spider opens up with a retractable-hardtop throwing more sunlight on driver’s already enjoying a hybrid AWD powertrain aflame with 986 horsepower and 590 lb-ft of torque.

The 2021 Land Rover Discovery gets styling tweaks, top-tier Pivo Pro infotainment, and a new volume trim dubbed R-Dynamic, swaps old powertrains for two more-powerful engines. The 2021 Lexus LS 500 and 500h play the same subtle game, with nips and tucks in places like the suspension and armrests.

And is a pickup even a pickup anymore if it isn’t bulletproof and have three axles?

DISPLACEMENT TO GO AND TO COME

Mopar will put a 6.2-liter supercharged Hellcat V-8 into a box and send it to you. Called the Hellcrate, it ‘roids out an engine bay with 807 horsepower and 717 lb-ft.

If you prefer your return address from Dearborn instead of Auburn Hills, Ford Performance will put the 5.2-liter supercharged Predator V-8 in a box and send it to you. The automaker hasn’t divulged output figures, but that engine makes 760 horsepower and 625 lb-ft in the Mustang Shelby GT500.

A Mazda investor presentation showed pictures of the straight-six engines that will power Mazda’s future. The bitter part of this sweet news is that these engines will put Mazdaspeed in the rearview. A Mazda rep said the company “is focused on becoming more mature and upscale.”

Dr. Ulrich Bez, considered the father of the 993-series Porsche 911, and Aston Martin CEO from 2000 to 2013, will resurrect Italian brand Bizzarini with a trio of Aston alumni. While we wait for that, Zagato is making 19 Iso Rivolta GTZ grand tourers right now on the bones of the C6 Corvette.

But Bruce Meyers, the man who made buggies a big deal, sold his Meyers Manx company to a venture capitalist. Ex-VW, Porsche, and Audi designer Freeman Thomas will lead design, and new products, including electric models, are inbound. We profiled Meyers back in 2006. BMW announced three novelties this week beyond its electric iX. There’s this impeller-powered wingsuit that allows the wearer to fly at 186 mph and everyone else to pull out the old punchline, “or are you just happy to see me?” Then there’s the Motorrad Definition CE 04, an electric scooter concept that looks like it was built for a German reboot of Akira. Finally, BMW is going to offer a subscription-based service identifying speed traps.

Porsche blew us away with cars we’ll never get. In the 328 pages of the book Porsche Unseen, the Stuttgart automaker details 15 years of design studies. Blasts from the past and present include the 919 Street, a road-going version of the Le Mans-conquering 919 Hybrid, a 906 Living Legend concept, and a six-person racing van that would be perfect for the Scooby Doo crew to run the ‘Ring with.

Digital license plates with configurable messages have expanded east of the Mississippi, arriving in Michigan next year.

Charlottetown, on Prince Edward Island (that’s in Canada) welcomed its first displaced left-turn intersection. To help drivers and pedestrians figure it all out, provincial authorities commissioned 12 instructional videos. On turning left. Twelve. If an intersection needs a dozen tutorials, perhaps … 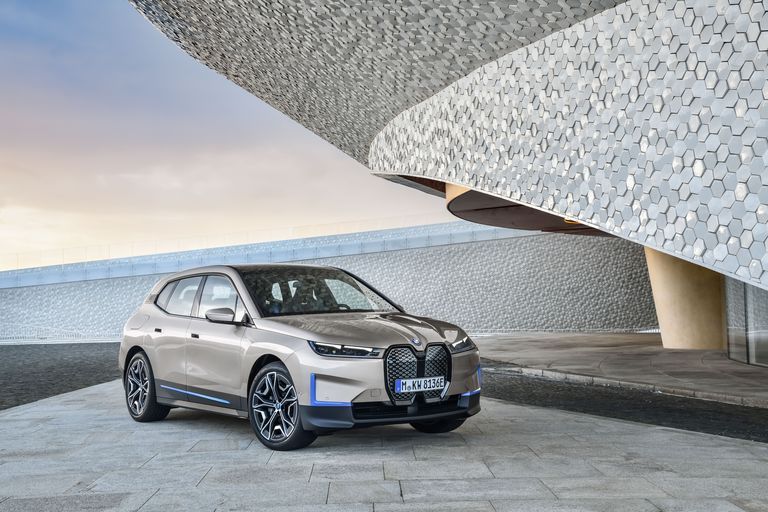