From the February 1997 issue of Car and Driver.

Alfred P. Sloan Jr. would have liked the Park Avenue Ultra, or at least the idea of it. Sloan, who built General Motors into the world’s largest corporation 70 years ago, had a place in mind for Buick: “The Cadillac and the Buick were first and second from the top of the price pyramid,” he said in his classic memoir, My Years with General Motors. Buick would be to Cadillac what Dr. Watson was to Sherlock Holmes: a respectable, dependable, and solidly middle-class second banana.

And that’s the way it was for generations. Indeed, Buicks were called “doctor’s cars.” They were substantial but not overbearing, costly but not ostentatious. Then GM started tinkering with Sloan’s successful strategy, going so far as to field a Buick muscle car in 1985 (the Regal Grand National) and, more recently, inflicting the ultimate indignity by pasting Buick’s venerable Roadmaster badge on what was essentially a tarted-up Chevrolet Caprice. It’s no wonder the division slid into an identity crisis from which it has yet to emerge.

Perhaps the Park Avenue can lead Buick out of this wilderness. For one thing, this car hews more closely to Sloan’s vision. This is a Buick that, well, feels and look like a Buick. It borrows few of its major parts from GM’s more plebeian divisions, and it isn’t a thinly disguised version of some other model. Although the Park Avenue shares its architecture with the Buick Riviera and the Oldsmobile Aurora and is nearly identical in its essential dimensions, it has its own body and clearly different style. And starting at $35,793, it’s priced neatly in GM’s conservative sedan lineup between the Olds Regency, which tops out just under $30K, and the Cadillac DeVille, which starts at $38,801.

There’s something big­-shouldered and double-­breasted about the Park Avenue. It’s pumped up and beefy, but it carries its bulk as gracefully as do some big men, guys like George Foreman and Jackie Gleason. The design is clean and confident, its arcs and bulges relieved by a thin chrome strip around its lower perimeter that accentuates the car’s length. A fine-toothed grille morphs Buick’s traditional big-mouth look with a touch of Jaguar-ish finesse. The Ultra, which squats seven ­tenths of an inch closer to the ground than the non-Ultra, looks particularly baronial in a dark color with a set of chrome wheels and blackwall tires filling up its full-radius wheel openings.

Highs: Luxury without ostentation, a look clearly its own.

There’s a stateliness to the Park Avenue that carries through to the interior, which feels like the office of an old-line law firm—comfortable, low key, yet imposing. Here is where the Ultra parts company with the regular Park Avenue, with its leather upholstery and abundance of luxo-treats such as genuine-wood door trim, automatic windshield wipers, an air-filtration system, rear-seat vanity mirrors, and a nine-speaker stereo.

Like the outside, the interior design is assured and without embellishment. The instrument panel, with its small tachometer and 140-mph speedometer, is in plain view and easy to read. The various switches and controls are large, well-marked, and in the right places. The buttons and the levers have the touch and feel of an upscale stereo system—except for the ashtray, which is damped to open with a light touch but takes a hard slam to close. The dashboard sweeps around into the doors, adding to a general feeling of comfortable encapsulation.

The seats are plush but not too mushy, and the driver’s seat in the Ultra is adjustable every which way, although it could use more lateral support. Notable for their comfort are the front safety belts, which are integral with the seat and adjust for height along with the headrest. As befits a large sedan, the rear seat has plenty of elbow and leg room. Front and rear, the seats are vastly superior to the tufted divans GM used to put in its upscale cars.

Aside from its scads of luxury features, the Ultra also trumps the base-model Park Avenue with its supercharged 3800 Series II V-6 engine, which produces 240 horsepower, 35 more than the Park Avenue’s naturally aspirated motor. This engine’s Roots-type blower packs a denser air/fuel charge into the combustion chambers almost instantaneously from low revs to redline. This makes for a power curve that arcs upward as smoothly as a Ken Griffey Jr. home run. The Ultra leaves the line energetically and charges up to highway speeds with little effort, managing the zero-to-60-mph sprint in just 7.7 seconds. In the midranges, a stab of the throttle produces a slight hesitation as the transmission kicks down a gear and the engine noise climbs a few decibels. Then the car zooms off without any apparent strain. The Ultra is not a sports sedan by any means, but neither is it power-challenged.

The same cannot be said of the Park Avenue’s handling, which is less than ultra. Its steering isn’t overly assisted, but there’s no particular feel to it, and the car floats down the highway like a ground-­bound cumulonimbus cloud. Although it has a thoroughly modern suspension system—struts in front and semi-trailing arms in the rear—the springs and the dampers are tuned for comfort, perhaps too much so. Instead of swallowing a bump or sharp dip, the Ultra’s suspension tends to chew on it for a while.

At around-town speeds, the Ultra’s soft suspension settings and woolly steering aren’t particularly noticeable. But cruising along at about 40 mph on intermediate roads with long sweeping turns, you’ll find that keeping the car between the white lines calls for regular mid-course corrections, a few degrees left, a few right—it’s like guiding a sailboat with a tiller. And if the road tightens up, the Park Avenue goes into perpetual understeer—with a low 0.73-g grip limit—at any speed above a brisk trot. The Ultra does not like adventurous driving and communicates its displeasure with body roll and shrieking tires.

The Verdict: A straight shot down the fairway for the country-club set.

What this car loves is the great American highway. It seems to take a set once it tucks into a lane on an interstate or a freeway; the steering locks into a groove, and the engine settles into its comfort zone. This car was bred to make the run between say, Los Angeles and Las Vegas or New York and Florida, over and over. Just slide in a Yanni tape, set the cruise control, and pop a can of Geritol into the cup holder.

To those of us who drive cars in each succeeding generation, the Park Avenue has been a study in automotive evolution. We’ve seen the division dispense with “whites and wires,” with vast areas of chrome, and with red-velour bordello interiors. Now the Park comes with an analog­ gauge package in a tasteful dash. Its seats are more compact, less pillowy, and more supportive. The exterior styling is rounded, restrained, and unlikely to offend. Under the skin is one of the planet’s most convincing pushrod powertrains. Doctors, come on back. —Barry Winfield

This car is so confidently unadorned, hardly more than a string of pearls to go with its simple black dress. I find comfort in that look, and in the urgent surge that answers my toe’s dip into the power, and in a cockpit so broad of beam that I can sprawl my knees wide without knocking into the furniture. But how shall I adjust instrument brightness? I scan the buttons and switches. Nary a clue. Okay, reflex takes over, and my left hand reaches to twist the light knob, just as it did in that 1955 Dodge during my driver’s-license test. The dials obediently fade. Yes, I’m comfortable right down to my DNA in this Buick. —Patrick Bedard

Buick’s “Premium American Road Car” shtick may resonate with the AARP contingent, but it has likely led both old and not-so-old enthusiasts to dismiss the marque from consideration. That’s a pity with this car. Its blown V-6 drivetrain combines the smoothness expected in a 35-grand car with the power and responsiveness of sedans costing twice as much. The insides are comfortable and quiet, and the steering is clean. A touch more damper control would be nice, but otherwise, this would be a fine blueprint for a new Jag. Oddly, these facts will remain unnoticed not only by enthusiasts, but also by many of the Park’s buyers. —Don Schroeder 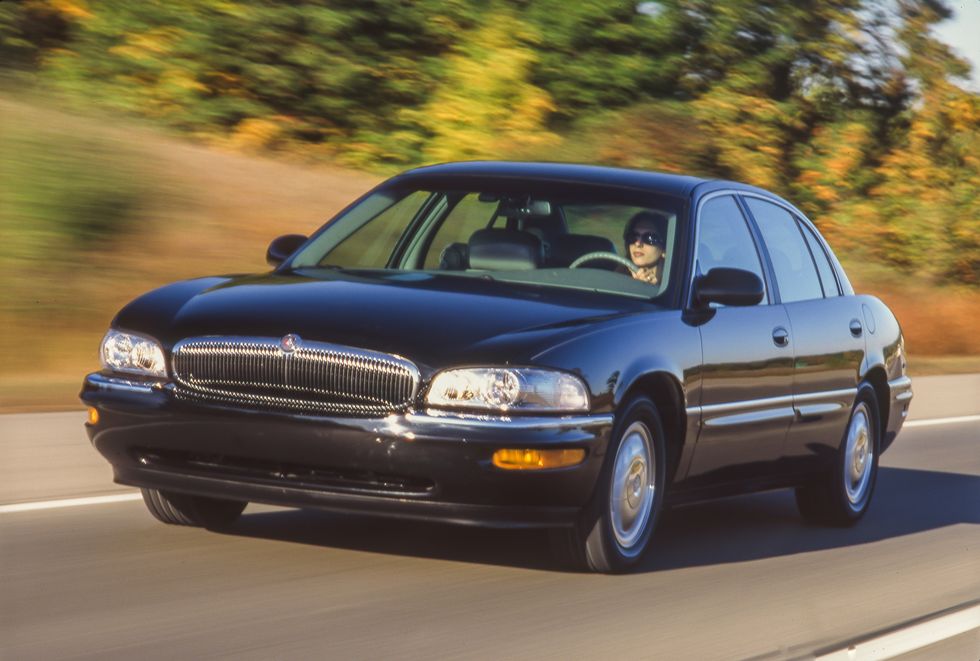