From the April 1985 Issue of Car and Driver.

The Honda Civic CRX is one of our favorite cars, but we’re never sure how to categorize it. With comfortable accommodations for two, low cost, and superior fuel economy, it’s an outstanding commuter car. But with its sporty two-seat design, excellent performance, and nimble handling, it can also be viewed as the reincarnation of the low-priced sports car.

For the 1985 model year, American Honda has tipped the balance decisively in the sporty direction by importing a new version of its two-seater, the CRX 1.5Si. The Si is equipped with several features that CRXs for the Japanese and European markets have enjoyed for more than a year.

The most important upgrade is fuel injection. Honda engineers have fitted their own electronic fuel-injection system and a new tuned-runner intake manifold to the existing all-aluminum 1.5-liter engine. An associated change is the deletion of the CVCC prechambers with their tiny intake valves; the fuel injection offers no easy means of providing the richer mixture burned in the prechambers. Modern three-way catalysts and feedback fuel-air-ratio controls, however, have made the CVCC system largely unnecessary for emissions-control purposes.

Sources at Honda tell us that this engine was delayed for America to ensure its durability and reliability. Whereas those aspects of the engine will only be proved in time, the new motor’s energetic output is immediately apparent. Power has increased from 76 hp at 6000 rpm to 91 hp at 5500 rpm, and torque is up from 84 pound-feet at 3500 rpm to 93 pound-feet at 4500 rpm. To bolster performance further, the Si’s final-drive ratio is 4 percent lower.

These measures improve the CRX’s already healthy performance by a good margin. The zero-to-60-mph sprint is covered in just 9.1 seconds, compared with 10.4 seconds for a standard 1984 1.5-liter CRX. In the standing quarter-mile, the Si stops the clock in 16.4 seconds at 81 mph, compared with 17.4 seconds at 77 mph. The margin widens further at higher speeds as the injected car attains 100 mph in 36.3 seconds, about eighteen seconds quicker than a standard CRX, and its top speed jumps from 103 to 112 mph. At the same time, the injected motor is every bit as smooth and torquey as the standard one and is much easier to start and operate in cold weather.

The added thrust makes the CRX even more of a blast on winding roads than it was before. Although the injected car comes with the same sport suspension and wheel and tire sizes as the other 1.5-liter CRXs, the 20 percent power boost makes it easier to exploit its capable handling. Entry and exit speeds in corners can be closer to the car’s limits, and the extra power allows the handling balance to be adjusted with the throttle over a broader speed range than before.

On a jaunt through the Angeles Crest Forest on our way to a desert test site, we found the injected CRX remarkably capable. Even on the steep uphill stretches, it had plenty of power. The sure-footed chassis was unflustered by the varied switchbacks and occasional slippery sections. The chassis is so well balanced, in fact, that it could benefit from larger or stickier tires, which would improve its middling 0.75-g lateral grip. Such a change should be accompanied by more supportive seats, because the existing buckets are already marginal for hard driving.

Although the tires and the seats are unchanged, the CRX 1.5Si is equipped with several features that, like the injected engine, were previously withheld from the American market. One is a unique power sunroof. Unlike a conventional sunroof, which slides backward between a roof s inner and outer panels, the Si’s moves upward and then backward over the roof, taking a smaller bite out of headroom and allowing a much larger panel than would be possible with a conventional design.

Also included are a rear wiper/washer, 5.0-inch-wide aluminum wheels, and a new rear spoiler that’s molded of soft urethane. (The rear wing on regular CRXs is molded of hard plastic.) In addition, the CRX Si has an exclusive metallic-black paint option, supplementing the standard choice of red, white, or blue.

Otherwise, the Si has the same excellent layout and features as other CRXs. The additional goodies boost the base price of an Si to $7999, more than a grand higher than the standard CRX, but we think sporting drivers will find their money well spent. Honda should have no trouble selling the 18,000 units it intends to import in 1985.

Perhaps such success will encourage Honda to continue in this vein and import the CRX DOHC Si, which has recently been introduced in Japan. Its 1.6-liter engine, four valves per cylinder, and 135 JIS horsepower would leave no doubt in anyone’s mind that the CRX is a sports car, not a mere commutermobile. 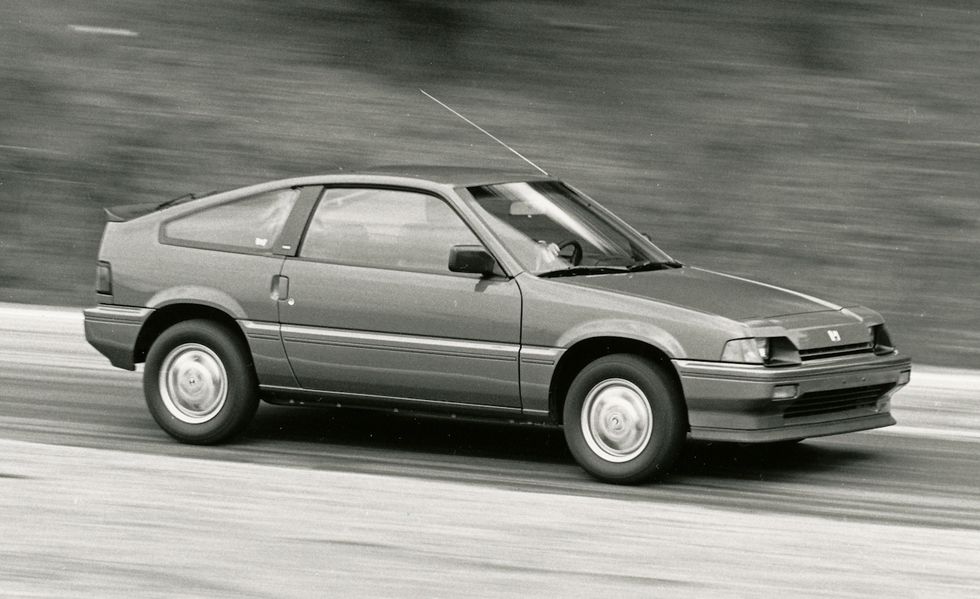