If you’re into cool Porsches, you’re going to like this news. The company revealed late yesterday a collection of previously-unannounced one-off concepts to the public, giving us an inside look at what could’ve been from the past 15 years.

The coolest car of the lot is the 919 Street, shown above. Developed in 2017 “to make the exhilarating driving experience of the LMP1 race car available to amateur drivers,” it was supposed to use the same carbon monocoque, hybrid drivetrain, and wheelbase as Porsche’s Le Mans-winning 919 Hybrid, with more subdued, production-like bodywork. Unfortunately, a 1:1 clay scale model is as far as the project ever went.

Next up is the Porsche Vision Spyder. Designed just last year, it’s a modern take on the 1954 550-1500 RS Spyder, with no roof and a simplistic cockpit. There are plenty of graphics and red accents, and a cool unique roll bar piece. Like the 919, the car is an un-drivable 1:1 scale model.

Then there’s the Porsche Vision “Renndienst.” The funkiest of the collection, it was conceived in 2018 as a “family-friendly space concept for up to six persons.” According to the company, the 1:1 model was built to show how designers could apply Porsche design DNA to a segment it doesn’t sell a car for. It’s supposed to be all-electric and have a center driver’s seating position. To us, it seems like Porsche’s take on VW’s upcoming I.D. Buzz EV bus.

Another entry into the minimalist category is the Porsche Vision 916, a modern version of the prototype from the Seventies that never saw production. This iteration, designed by an intern from Porsche’s design team in 2016, is a clay 1:1 scale model that, should it have been produced, would be powered by an all-electric drivetrain with four in-hub motors.

The stunning 904 Living Legend concept, built in 2014, uses the same carbon fiber monocoque as the ultra-efficient Volkswagen XL1. Framed as a minimalist sports car, it has some stunning proportions, and would’ve weighed around 2000 pounds in production form thanks to a tiny, high-revving V-twin motorcycle engine—similar to VW’s Ducati-powered XL Sport concept. Unfortunately a 1:1 scale model was the only example built.

Taking things one step further is the 906 Living Legend concept. Developed in 2005, it used the iconic Sixties racer of the same name as inspiration, but incorporated a whole collection of new design cues. According to Porsche, this was one of the cars used to inspire its current model electric model lineup.

Continuing the theme is the Le Mans Living Legend concept, first conceived in 2016. Inspired by the 78 PS, Porsche’s closed-cockpit 1953 Le Mans entry, it uses a Boxster as a base, and would’ve used a racing V-8 engine if it wasn’t just a clay model. The company says this car is the 718 GT4’s predecessor, which makes sense. Unlike the other cars in this article, we can see why Porsche didn’t initially release this car to the public—from many angles, it looks vastly similar to the Alpine A110.

According to Porsche, the idea for 960 Vision Turismo—the basis for what would eventually become the all-electric Taycan—was discovered by accident. “When walking past, I saw a schematic representation of the Porsche 918 on a designer’s drawing board in our studio,” remembers chief designer Michael Mauer. “A line had been redrawn with a felt-tip pen to clearly show the falling contour. From the corner of my eye it looked like a rear door joint. I was astonished!” The car was the first Porsche to receive the continuous light bar design at the rear that almost all current models use today.

These are just eight of the 15 previously hidden cars Porsche has unleashed on the world through a new 328-page book called Porsche Unseen, for sale now through all major book retailers. If you or someone you know is obsessed with the world of Porsche, it’s a must-have. 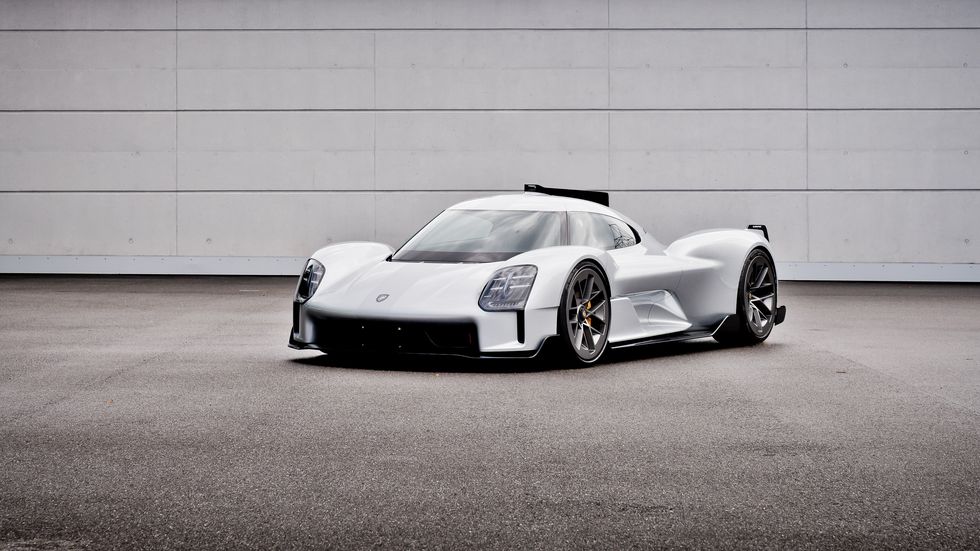