As criminal as it might be, the exquisite 382-hp turbocharged inline-six beneath the hood of our long-term BMW M340i remained off for most of the spring. From mid-March to the beginning of summer, a mere 1000 miles accumulated on the odometer. From early April through mid-June, we only refilled its tank once with premium. But as you likely have guessed, this had nothing at all to do with our BMW. Now that the normal life has somewhat returned, we’re back behind the wheel of the M340i and piling on the miles.

In the past few months, the M340i has taken two trips to the Rocky Mountains. News editor Colin Beresford was first to cross the Mississippi on his way to the Big Thompson River to get his fish on. He appreciated the M340i’s docility and quiet demeanor on the straight open roads of the central plains and how quickly the sweet-six will spur to life with a kick of the right pedal. Beresford thinks there’s some picturesque scenery near the Rocky Mountain National Park, but he didn’t stop to look during his drive. Instead, he hustled the M340i along the twisting roads carved into the hills.

News editor Connor Hoffman piloted the M340i’s second westward adventure. Hoffman went farther than Beresford, crossing Colorado on his way to Utah’s Capitol Reef National Park. It was there in the searing 100-degree desert heat he took issue with the 3-series’s air-conditioning system.

A few problems have come up. During Beresford’s trip, the active shutters in the grille that open and close depending on cooling needs (one of the elements that contribute to the BMW’s stellar fuel economy) failed and tripped the “Check engine” light. Thankfully, they stuck in the open position, and no cooling issues happened during his expedition. Once back in Michigan, the dealer replaced the lower shutter assembly under warranty. At the 20,000-mile mark, the dealer performed the M340i’s second scheduled maintenance consisting of an oil change, cabin air-filter replacement, and a number of inspections all covered under BMW’s 36,000-mile complimentary maintenance program. A “Vehicle Key: battery empty” alert appeared on the dash, and we replaced the dead battery on our own for $3. A Michigan pothole cost us a front Michelin Pilot Sport 4 S leaving us $310 lighter.

With the halfway marker now in the books, BMW’s M340i remains a rocket of a sedan that’s capable of gobbling up long stretches of highway. While the stiff and firm seats still garnish plenty of negative comments, we’re just happy to be back in them after a long, long spring.

There’s a lot to love about our long-term BMW M340i. For one, its roofline is below 60 inches and there isn’t room for more than five passengers. It’s not an SUV and we love it for that. The M340i also has a magnificent powertrain: a potent 382-hp turbocharged inline-six mated to an expertly calibrated eight-speed automatic. But this sedan has more than just a good heart, it has the bones to support it.

As we complete the first quarter of our 40,000-mile evaluation, the logbook is filling up with comments gushing at how much the new 3-series and its G20 platform have improved. Former editor-in-chief Eddie Alterman noted the stiffer structure and sorted body control over the previous 3-series generation (F30), writing, “The ride is firm, but the jolts are not.” He went on to compare it to an E39-generation BMW M5 with only one thing keeping it from its best impersonation. Care to take a guess? If you’re thinking steering, you are correct. BMW, the complaint box is getting full. Are you ready to listen to us?

A handful of staff members have penned a few complaints about the M340i’s seats. The leather-wrapped buckets are as unyielding as a new baseball mitt. We’re hoping that with more use, they’ll soften up. Also, the leading edge of the thigh support ends abruptly creating a sharp edge. Those blessed with long legs will likely never notice it, however, shorter inseams will feel that edge go right into the back of a thigh. Others have griped about the digital instrument cluster’s strange opposing swings between the tachometer and speedometer and the screen’s susceptibility to being washed out by direct sunlight.

Our winter has been mild, but the OE-sized Pirelli Winter Sottozero 3 performance rubber purchased from the Tire Rack function adequately when the white gold falls from the sky. With those tires underfoot, we haven’t had any regrets about forgoing the $1860 all-wheel-drive option. We appreciated the ability to start the car remotely when the temperature dipped below freezing, but it took some looking to find the feature as it’s buried deep in the infotainment submenus. Even without the remote start, the engine gets up to temp quickly and sends useful heat into the cabin in short order.

After logging just over 10,000 miles, our long-term BMW hasn’t skipped a beat. The M340’s first scheduled service as indicated by the onboard computer was a simple one: oil and filter swap and a few basic inspections. While in the care of our local dealer, two recalls were also performed. The first recalibrated the rearview camera to conform to federal standards and the second added a spray of wax onto the front axle supports to prevent corrosion. BMW includes the cost of all maintenance up to 36,000 miles. We had to add two quarts of oil over the first 10,000 miles, one at 4500 miles and another just before the service visit. While adding oil to any modern engine might be cause for concern, our dealer assures us it’s within normal tolerances. For now, we’ll take their word for it, but it’s something we’ll be watching closely.

We can’t deny the market’s fascination with high-rise SUVs, crossovers, and trucks. The parking lot at our headquarters is full of the things. But, like a cinnamon roll needs icing, the world still needs sports sedans. Having subjected nine previous versions of the BMW 3-series to our long-term, 40,000-mile torture test, this iconic sports sedan is no stranger to our professional, and personal, lives. From deputy editor Tony Quiroga’s time-capsule 1991 325i, deputy testing director K.C. Colwell’s high-mileage 2007 328i, and road warrior Keoni Koch’s 2001 325xi wagon, no car outside of a Mazda Miata is more common on the we-bought-one-ourselves list than the 3-series. Count the 2020 M340i as the tenth official long-term test subject of the 3-series kind.

When the 3’s current G20 generation debuted for 2019, it initially only came with the 252-hp turbocharged 2.0-liter inline-four. Although that four-banger is a stellar powerplant, it left us yearning for more. With the next iteration of the full-Monty M3 a year or so away, we ordered up the hottest version of the current 3-series to date, the 382-hp M340i, complete with BMW’s B58 turbocharged 3.0-liter inline-six mated to ZF’s excellent eight-speed automatic transmission. Sadly, BMW no longer offers a manual transmission option for the 330i and M340i in the United States.

We specified our M340i, which carries an enticing base price of $54,995, with a coat of Portimao Blue paint for $550 and a black leather interior with blue stitching for another $1450. Things escalated quickly from there. Safety systems such as lane-departure warning, blind-spot detection, and forward-collision detection seemed like reasonable add-ons for $500, but the mandatory upgrade to the $1700 Driving Assistant Professional package for adaptive cruise control and lane-keeping assist did not. The $2100 Executive package adds adaptive LED headlamps with Laserlight (which provide variable illumination), automatic high beams, and a parking assistant, and our frosty mornings will be more tolerable with the $1400 heated seats and steering wheel, as well as with the $300 remote-start feature. A power-actuated trunk? That’ll be another $250.

To complement the M340i’s standard M Sport brakes and electronically controlled limited-slip differential, we selected the $700 adaptive dampers and the Cooling and High-Performance tire option for $1500. That clumsily named package provides an additional engine oil cooler, a more powerful cooling fan, and, obviously, summer tires. Our car’s nearly $12K in options increased its bottom line to $66,820, which isn’t that much less than a base M4.

After trudging through BMW’s 1200-mile break-in period, our 3-series hit the test track to stretch its legs, rather impressively so. While the M340i features a launch-control system for hasty getaways, we found that taking matters into our own hands and managing the turbo-six’s silken thrust ourselves was the quickest way off the line. Ultimately, the M340i ripped off a 3.8-second zero-to-60-mph sprint and tore through the quarter-mile in 12.3 seconds at 115 mph. If you are wondering, those times are on pace with the last-generation M3.

We’ve griped about the 3-series’s steering since the previous F30 generation launched in 2012. Although the G20 represents an improvement in that area versus its predecessor, the dull off-center movement and its numb connection to the road is not the steering feel that the M340i truly deserves. The chassis, however, is well-balanced and the optional 19-inch Michelin Pilot Sport 4S summer tires are hooked up, clinging to the skidpad with a stout 0.96 g of grip and returning a 155-foot stop from 70 mph.

The M340i isn’t just a numbers car, though. On the street, the adaptive dampers provide a smooth ride over the open road yet can firm up nicely when the pavement begins to twist into the shape of a rattlesnake. The Bimmer’s cabin is hushed at cruising speeds, and its stonking engine has a quiet side that’s buttery smooth around town. As of this writing we’re averaging 24 mpg in mixed driving, just 1 mpg shy of the EPA’s combined estimate. Within the first few weeks of taking delivery, we sacrificed a front tire to a Michigan pot hole, requiring a tow to the local dealership and $378 out of our pockets for a replacement.

Perhaps our emotions have been dulled by the onslaught of SUVs and crossovers that have taken over our long-term fleet. Or, the onset of winter has just turned the ink of our long-termer’s logbook pen to jelly, as only one comment lives within its pages thus far. “I look forward to spending more time with the M340i,”scribbled senior editor Joey Capparella. Undoubtedly, his words speak for the entire C/D staff. A powertrain this sweet is a solid foundation to a lasting relationship. But will the disconnectedness between human and road provided by the M340i’s helm result in a soul-less affair? Stick around, we’ve got roughly 36,000 miles still to go. 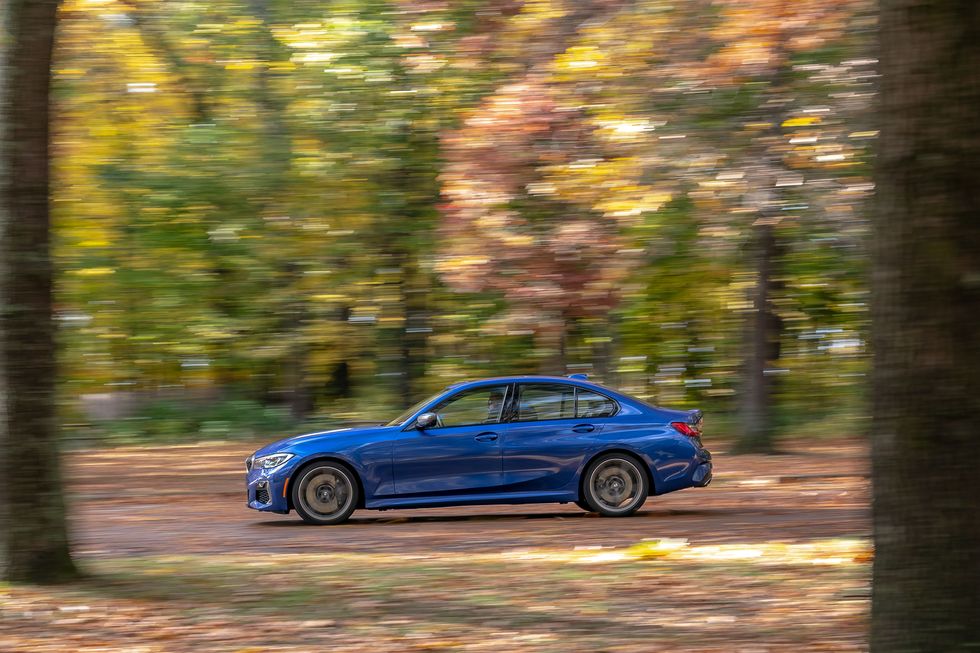