UPDATE, 11/16/20: Nissan said that the pre-production Frontier we tested for this article was running pre-production “developmental” software with a speed governor that was higher than what production trucks have.

In reaction to our suggestion that the speed governor of the pre-production 2020 Frontier we tested—and possibly all 2020 Frontiers’ speed governors—allowed too high a top speed for the speed rating of the tires Nissan took the test truck back to their research-and-development facility for review. Here’s what Nissan reports their examination revealed:

“After reviewing the pre-production vehicle that you tested, we confirmed that it was programmed with developmental software. Pre-production units are not offered for sale to customers and are only loaned to industry members for limited testing and demonstration purposes. Our production programming is calibrated to govern the vehicle speed to approximately 112mph, within the limits of the standard T-rated tires, which we also verified through testing a production vehicle at our R&D facility.”

In other words, the speed governors of production 2020 Nissan Frontiers are both programmed correctly and operating properly, unlike our test truck’s.

CORRECTION, 10/23/20: Originally, this story stated we were not aware that the Nissan Frontier we tested was a pre-production unit. The truck’s window sticker actually did have that advisement on it, and we have corrected the story below to reflect that.

When Ram revealed the TRX pickup to the world in mid-August, the hype was as big as the massive new truck. The company claimed that the T. rex is the “quickest, fastest, and most powerful mass-produced truck in the world.” Manufacturer promises that brazen beg for scrutiny. Uncovering their veracity is one of the reasons we have a comprehensive testing regimen: data talks.

We’ve tested the 2021 Ram 1500 TRX, and here’s what the data says: first, there can be no argument about the TRX’s power superiority. It’s an objective number, after all. Next, it took barely more than a dozen seconds at our test track with the TRX’s throttle pinned to confirm that it’s also the quickest-accelerating pickup truck on the planet.

But Ram’s claim that the TRX is also the fastest pickup—the one with the highest top speed—has proved untrue, at least temporarily. In a David vs. Goliath moment, the mighty T. rex was felled by a puny Nissan Frontier, a truck that has been on sale largely unchanged since 2005. In Car and Driver instrumented testing, the Nissan went faster.

How’d this happen? The short answer is that the TRX hit its top-speed governor earlier than the Frontier. The full story is considerably more complicated—and, in the end, it supports Ram’s top-speed claim.

In our testing, the Ram speed limiter cut in at 118 mph, just as the company said it would, with the truck accelerating to that velocity as if headed for lunar orbit. No other pickup trucks we’ve tested come close. Our long-term 2017 Raptor topped out at 108 mph, and a 2019 Chevy Silverado with the 6.2-liter V-8 leveled off at 106 mph.

Meanwhile, eagle-eyed readers may have noticed that, in our recent test of a 2020 Nissan Frontier, which has a new, 3.8-liter V-6 making a wimpy—by TRX standards—310 horsepower, the ancient mid-size pickup hit its speed limiter at 120 mph. It topped the 702-hp monster-truck Ram TRX by just 2 mph, but a win is a win.

What Tires Have to Do with It

Normally, a vehicle’s top speed is determined by the interplay of one or more technical factors: its horsepower, drag coefficient (Cd), frontal area, gearing, driveline limitations, the speed rating of its tires, and its top-speed governor (if it has one).

For the TRX, its tires’ speed rating—the fastest speed at which the tires can be driven safely— determined the truck’s top speed. The fat, off-road-oriented 35-inch Goodyear Wrangler Territory All Terrain tires it wears carry a T speed rating, which equates to 118 mph. That’s where Ram set the TRX’s speed limiter, so the truck could not exceed the speed rating of its tires.

The National Highway Traffic Safety Administration (NHTSA) tells us that “speed ratings for tires are not required by law,” although virtually all tires fitted to production vehicles have them. (Speed ratings range up to 186 mph, and beyond in special cases.) What’s more, automakers virtually never allow a vehicle’s top speed to exceed its tires’ speed rating in order to protect themselves from liability suits should there be a high-speed tire failure. The manufacturer sets a vehicle’s speed governor, if one is required, to match the speed rating of the tires fitted to the vehicle. Or the company specs a tire with a speed rating high enough to accommodate the vehicle’s ungoverned top speed.

The Frontier is the first vehicle we’ve come across where that’s not the case. Our Frontier test truck’s Hankook Dynapro ATM all-season tires carried the same T speed rating as the TRX’s donuts, so we would have expected it to have been limited to at most 118 mph. But it wasn’t; it went 120 mph.

Faced with this news, Nissan reminded us that our test truck was a “pre-production trial unit,” and stated that “production-level programming of the 2020 Frontier has the top speed governed at 112 mph, well within the safety rating of the tires. We are sending the truck to our engineers for testing and analysis.”

It appears that something was amiss with our test truck’s speed-governor calibration, and, for all we and Nissan know, possibly all 2020 Frontiers’ speed governors.

So for now, the Frontier’s top-speed win has a big fat asterisk next to it. It appears to be an anomaly—an engineering mistake likely soon to be corrected. Sure, the Frontier went faster, but in our opinion Ram’s claim that the TRX owns the top-speed crown should stand. The definitive answer will come if and when we get another similarly equipped production Frontier to test. Data talks, and we’ll see if it says anything different then.

Oh, and if you want to own a really fast production pickup, we suggest you search our sister site, Bring a Trailer—or other reliable used-car sites—and find yourself a 2004 Dodge Ram SRT-10. That 500-hp Viper-powered 8.3-liter V-10 bad boy topped out at 147 mph in our testing. 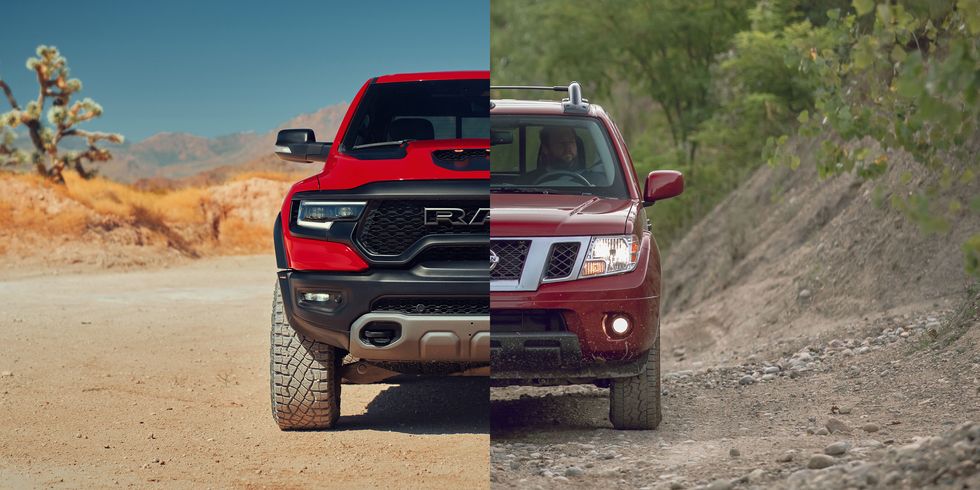