While the Morgan 3 Wheeler is about as English as it’s possible to be without saying “Tally ho” or knowing the minor rules of cricket, this eccentric retro-trike has used an American heart since it was launched in 2011. Which is the reason it is about to retire, in its present form at least: the air-cooled S&S V-twin motorcycle engine is unable to meet forthcoming European emissions standards.

The British sports-car maker has announced that production of the current 3 Wheeler will end early next year, with the celebratory edition wearing one of four eye-catching liveries to see it out in style. The company says that all 33 production slots of the limited run P101 have already been allocated, so if you want one you are too late.

While Morgan has four-wheeled models to sell in other parts of the world, the 3 Wheeler’s demise seems to raise an existential threat to the brand in America, where it has been the only vehicle that Morgan’s tenacious dealers have been able to offer for some time. The company has already told us it is hoping to bring its new BMW-powered aluminum-framed models to the U.S. under federal replica car legislation and we have already driven both the Plus Four and Plus Six in Britain. We’re also assured it will be launching a new three-wheeled model after what we’re told will be a brief gap, one that will be fully type approved for the U.S.

This won’t be a version of the electric 3 Wheeler the company started work on a few years ago—the stylish EV3, which replaced the S&S motor with a 20.0-kWh lithium-ion battery pack wrapped in stylish brass conductive cooling fins. That was canned before reaching series production, and although Morgan insiders say that electrification of all of its models will happen in the medium-term future, we’re told to expect the next-gen 3 Wheeler to launch with a combustion powerplant capable of passing European emissions, most likely a water-cooled motorcycle engine.

The 21st-century 3 Wheeler was inspired by the cars that Morgan started out building more than a century earlier and became one of the company’s most successful models of all time, selling more than 2500 examples. (Morgan typically makes just 850 cars of all sorts a year.) We drove a 2013 3 Wheeler on a tour of some of California’s abandoned towns, a memorable story written by the late Davey Johnson that is well worth another read.

The runout P101 3 Wheeler gets disc wheels in place of wire spokes and Hella driving lamps which we’re told have been positioned carefully to reduce turbulence around the front suspension. Black or white paint is offered, with the option of one of four graphics packs: the Belly Tank is inspired by lake racers and features what is described as a “distressed effect”; the Aviator brings RAF bomber–inspired nose art; the Race Car brings stripes and roundels; and the Dazzleship, seen here, carries a version of the Art Deco patterns that were intended to disguise the size and course of British warships from enemy submarines.

Morgan admits it could easily have sold out a much larger allocation of the P101. We’re told that 10 will be coming to buyers in the U.S., with the trike’s official MSRP a hefty $59,000. 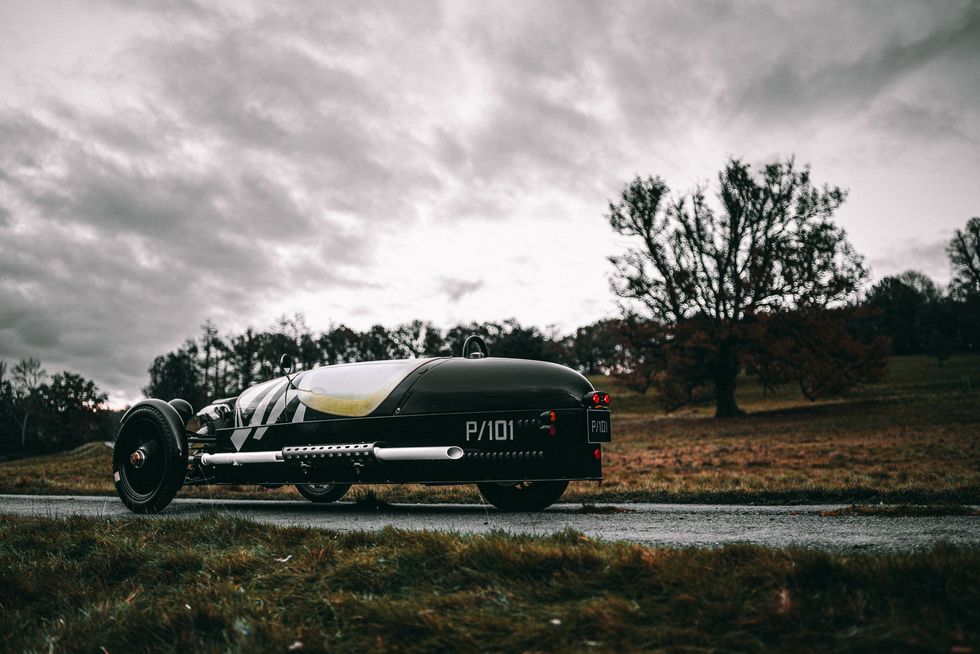