Mini provided scant details on the Urbanaut’s powertrain, chassis, or autonomous technology. We know that it’s electric and can drive itself in at least some circumstances, though it can also be driven in the conventional sense—the steering wheel retracts into the dashboard when not in use. But either those details haven’t yet been fleshed out or Mini would simply rather keep them secret for now. Instead, plenty of attention has been paid to the loungelike interior, which can be configured in three different ways to suit different moods and uses. When driving (or being driven), the Urbanaut is laid out much like any other vehicle, though its unusual dimensions make it unlike any Mini currently on the road. At 14 feet eight inches long, the Urbanaut is roughly seven inches longer than a Mini Clubman, but it’s significantly taller, with room for occupants to stretch out and even move around when the car is not in motion. Certain elements of the exterior design will be familiar, like the short front and rear overhangs and the minimalist design approach, but others are new. The grille is octagonal for the first time, as opposed to hexagonal, and the headlights are only visible when illuminated. If you’re in more of a festival mood, the Vibe configuration may suit better. In this mode, the Urbanaut’s single side door slides open, and the circular infotainment display shows an animated soundwave graphic to match the music you’re listening to. The same animation will project onto the Urbanaut’s four wheels, perhaps helping to attract like-minded festival goers who want to talk about your sweet ride or maybe share some medicinals.

If it’s not clear enough that this is a concept in the truest we-will-probably-never-build-anything-like-this sense, Mini doesn’t even hint at a production timeline for the Urbanaut. But it’s probable that at least some design elements showcased here will make their way into roadgoing Minis in the next few years. Our money’s on the octagonal grille, but we wouldn’t mind if it turned out to be the swivel chairs. 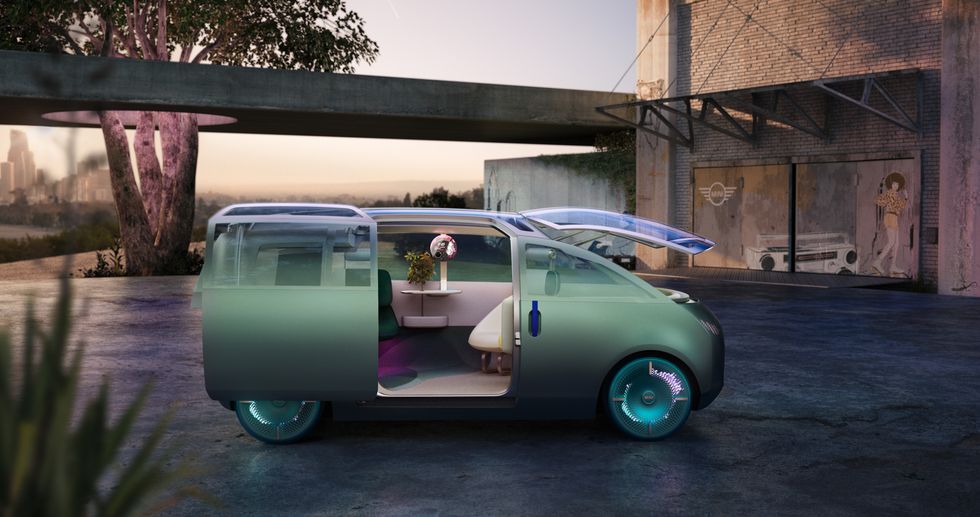