The Mercedes-AMG GT Black Series is one serious piece of kit. With a 720-hp twin-turbo V-8 under the hood and nearly as much aero as a GT3 race car, there’s no doubting its ability to dominate a road course. That’s why we weren’t too surprised to hear a rumor back in October that the car had broken the Nürburgring production-car lap record. It turns out that rumor was true.

Mercedes-AMG confirmed today that the GT Black Series set a blisteringly quick 6:43.616 lap time around the Nürburgring Nordschleife, beating the previous production car record-holder, the Lamborghini Aventador SVJ, by 1.354 seconds. The car, piloted by GT3 driver Maro Engel, was on its factory-spec Michelin Pilot Sport Cup 2 R MO tires. Mercedes said the camber and adjustable sway bars were set to their most aggressive settings, while the manually adjustable suspension was lowered by 0.2 inch up front and 0.1 inch at the rear for maximum aerodynamic effectiveness.

“With speeds of up to almost 168 mph in the Kesselchen section of the track and well over 186 mph on the long Döttinger Höhe straight, the AMG GT Black Series is significantly faster than my GT3 race car,” Engel said in a statement released by AMG. “It’s really impressive how much downforce the Black Series generates and how confident and reliably it can be driven, even at the absolute limit.”

It’s worth noting this 6:43 lap was recorded based on the ‘Ring’s old style of measuring lap times. The traditional track layout had cars entering and exiting the track at different places, omitting the small straight that comes after Turn 13. Under the Nürburgring’s new “official” method of recording lap times, which uses a single start/finish line and includes that small straight, the Black Series set a 6:48 lap time—still a production car record. (The Lamborghini lap record was set using the old method.)

While the AMG’s lap is certainly impressive, it’s only a matter of time until the next generation of hybrid and EV hypercars reaches the Green Hell. Until then, though, the Black Series is your Nürburgring king. 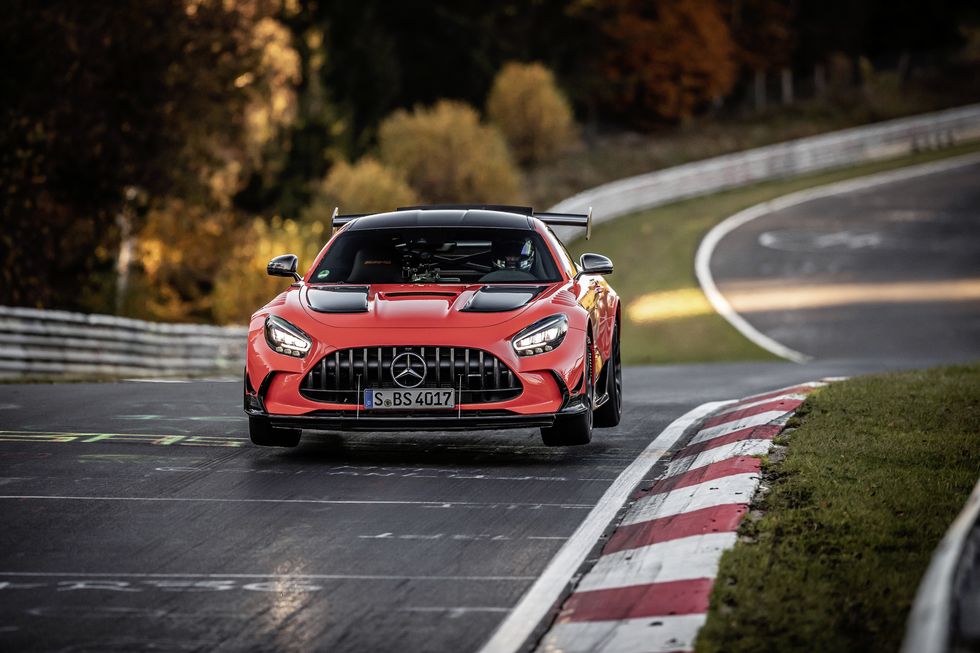