Lewis Hamilton’s 94th career win in his Formula 1 career was extra special with a splash of magnificent.

Hamilton’s triumph in the F1 Turkish Grand Prix on Sunday clinched his seventh F1 championship, tying the mark set by the great Michael Schumacher. Schumacher won his seventh title in 2004.

Both Schumacher and Hamilton won their seventh titles at age 35. Mercedes team principal Toto Wolff and Lewis Hamilton celebrate yet another milestone on Sunday in Turkey.

“I dreamed of this when we were young, when we were watching the Grands Prix,” Hamilton said. “And this is way, way beyond our dreams. I think it’s so important for kids out there to hopefully see this and don’t listen to anybody who tells you you can’t achieve something. Dream the impossible. You’ve got to work for it, you’ve got to chase it, and you’ve got to never give up and never doubt yourself.”

It was Hamilton’s fourth consecutive win of 2020 and 10th in 14 races this season. This one came from the sixth starting position on a day where Istanbul Park at times, thanks to wet conditions and a resurfaced track, resembled more a skating rink than a Formula 1 racing circuit. Early in the race, Hamilton trailed pole sitter and then race leader and first-time pole sitter Lance Stroll by 24.6 seconds.

Hamilton pitted for fresh intermediate tires on Lap 9 in sixth place, came out of the pits in eighth place. He was able to not only finish the race on that set but also win going away. His intermediates were nearly worn all the way down to slicks by the time he crossed the finish line. Lewis Hamilton is overcome with emotion after his win in Turkey on Sunday.

“Today, we knew coming here was already such a difficult weekend,” Hamilton said. “We were massively disappointed with our qualifying position. We knew that we were kind of on the back foot and we did the best we could, but then we learned a lot. That’s what we do as a team. There’s no blame game. We hash it out. We continue to try and improve our communication so that we can make moves forward.

“I just kept my head down and just kept believing that I’d eventually pick up pace of sort at some stage, and that’s what I did.” Hamilton’s Mercedes teammate Valtteri Bottas came into the race as the lone challenger mathematically alive in the championship fight. That fight on Sunday never materialized, as Bottas spun out twice on the opening lap in wet conditions and was a non-factor. Hamilton put an exclamation point on both the victory and the championship when he lapped his teammate on Lap 46 of the 58-lap race. Bottas finished 14th.

“I know often I say it’s beyond my wildest dreams, but my whole life secretly we have dreamed has high as this,” Hamilton said. “It felt so far-fetched. I remember watching Michael winning those championships, and we here, all us drivers, are always doing the best job that we can. And just to get one or two or even three (championships) is just so hard to get. Seven is just unimaginable, but when you work with such a great group of people and you really communicate and trust one another and listen to one another, there’s no end to what we can do together.” Lewis Hamilton crosses the line to the cheers of his Mercedes teammates.

And that begs the question of what’s next. Is championship No. 8 and beyond on the horizon? Hamilton is still unsigned for 2021.

“I feel like I’m only just getting started,” Hamilton said. “It’s really weird. I feel physically in great shape and mentally this year has been the hardest year probably for millions of people. I know things always look great here on the big stage, but it’s no different for us athletes. This has been a challenge that I didn’t know how to get through, but with the help of great people around me, with the help of my team, through the help of team LH, I’ve managed to keep my head above water and stay focused.

“I’m really hoping for a better year next year. I would love to stay. I feel like we’ve got a lot of work to do here.” Lewis Hamilton and Sebastian Vettel have combined to win 11 of the last 12 F1 Drivers’ Championships. 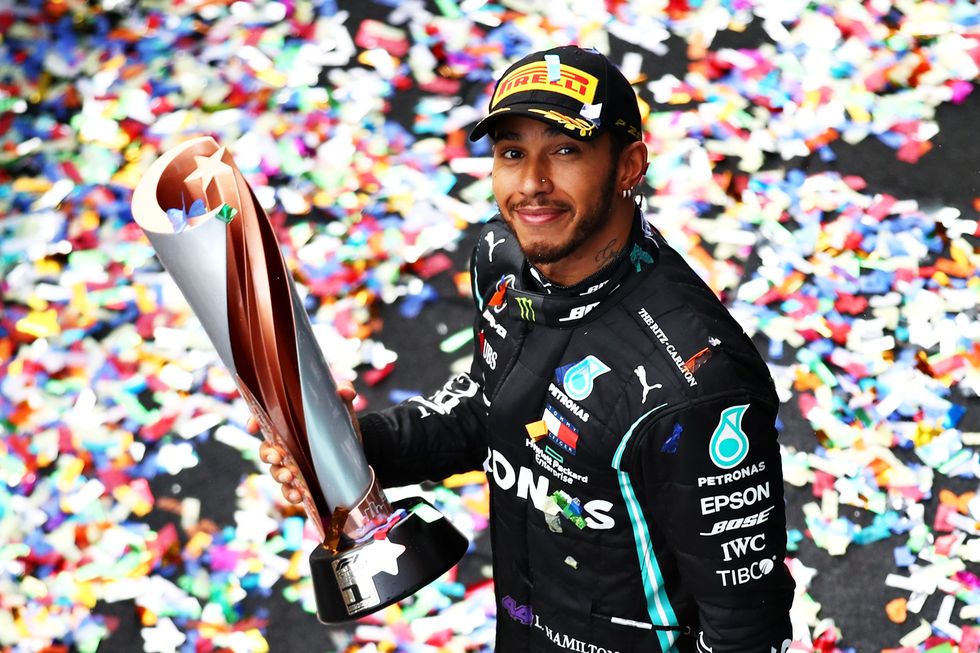