Jaguar Land Rover has filed a set of lawsuits demanding that its rival, the Volkswagen Group, be forbidden to sell new VW, Audi, and Porsche SUVs in the United States. That’s a huge ask, but it started very small: with the chrome dial on the Bentley Bentayga’s center console, the one encircled by cactuses and snowflakes.

It was a quiet spat until last week, when JLR in one day launched four U.S. lawsuits in two states and an unfair trade complaint against the entire VW Group. JLR, after years of unsuccessful negotiations with one of its largest competitors, now wants the U.S. to ban the importation of nearly every new VW, Audi, and Porsche with an off-road mode. If this much fury over a driving-mode switch sounds crazy, allow us to explain, as evidenced by years and dozens of filings we reviewed in U.S. district courts, the U.S. Patent and Trademark Office, and the U.S. International Trade Commission.

The Bentayga launched in 2016 as the world’s fastest and most expensive SUV. In that year, we whipped a Bentayga to 60 mph almost two full seconds ahead of the best Range Rover, and then tore another one through the Easter Jeep Safari in Moab. But the Bentayga had a rockier start. When the EXP 9 F concept debuted at Geneva, it was so universally panned that Bentley reportedly began redesigning the exterior a week after the show.

While the production Bentayga looked better, it shared many components with the VW Group’s lesser brands and has faced more competition in the super-luxe-SUV segment—hence, a 2021 refresh arrived much earlier than by the usual company standard. In that time, Land Rover responded by stuffing the Range Rover with more lavish long-wheelbase trims and more power, and by offering a hand-built two-door variant the company later abandoned. With the addition of the new Aston Martin DBX, and to the delight of the very wealthy, the market now has four British luxury SUVs priced in the $200,000 range. But lawyers and engineers at Jaguar Land Rover are less than delighted with the Bentayga. To them, the Drive Dynamics mode in the Bentayga ripped off Land Rover’s Terrain Response. That system, introduced on the 2005 LR3, offered a level of electronic control and customization unlike any other vehicle at the time. Five preset settings optimized the ABS, throttle and transmission tuning, differential locks, and air suspension for a variety of surfaces, indicated by icons on the center console (general, grass/gravel/snow, mud and ruts, sand, and rock crawl). Building on two older British patents filed by Ford, Land Rover submitted a patent application for Terrain Response to the U.S. Patent and Trademark Office in 2003. It was approved in 2008.

The Bentayga continues to offer four on-road driving modes as standard (Comfort, Sport, Custom, Bentley), and an All-Terrain Specification. That option, which adds four off-road modes, was the red flag. Twisting the dial to these modes (Snow & Grass, Dirt & Gravel, Mud & Trail, Sand) can change the vehicle’s behavior in a similar method as Terrain Response. For example, in Sand mode, the Bentley and the Land Rover will delay ABS intervention to allow loose sand to build up underneath the front tires, which shortens braking distances compared to stopping on firmer surfaces. The Bentayga also adjusts its ride height, steering, throttle, transmission, and various other systems to coincide with a given surface.

Car and Driver has no knowledge if other automakers, such as Ford, are currently paying royalties to Jaguar Land Rover for selling vehicles with similar terrain-adaptive driving modes. Vehicles of all types with multiple driving modes that control multiple vehicle parts are now becoming common. Technology licensing is also common in the auto industry—so in February 2016, that’s exactly what Jaguar Land Rover had in mind when it sent a friendly letter to Bentley, in which it alleged infringement of its patented Terrain Response.

Bentley didn’t believe it had violated any patent, and it didn’t intend to pay royalties for what it saw as a commonplace feature in a luxury SUV. That sparked Land Rover to rewrite its original U.S. patent to detail, with more exacting clarity, the features it charged Bentley with copying. By September 2016, Land Rover submitted an application that would reissue its 2008 patent with dozens of new claims, such as defining its system as “having driving modes that include at least two off-road modes and an on-road mode,” according to the patent and filings submitted by both automakers. A year later, Land Rover sent another letter to Porsche, alleging that its Cayenne was now infringing the Terrain Response patent and required licensing.

By February 2018, with talks going nowhere, Land Rover told Bentley its reissued patent would be approved “shortly.” The original patent did have a potential loophole. It described how the various driving modes worked but didn’t frame them in the unique context of the driver’s benefit—that a driver would have “direct input regarding the surface terrain.” When the patent office approved the reissue in May, Land Rover conceivably would be in a more secure position to demand royalties from Bentley. It sued Bentley for patent infringement—of the new patent that had just gone into effect—a month later.

In July, according to the lawsuit documents, Land Rover sent two more infringement letters to Audi and Lamborghini, specifically for the ANIMA system on the Lamborghini Urus and for Audi Drive Select on the Q5, Q7, and e-tron. Bentley shot back in October. In a motion to dismiss the case, the automaker said Land Rover’s entire 2018 patent should be declared invalid.

“The patent at issue in this case does not purport to solve a technological problem,” Bentley said in the filing. “Instead, its claims are directed to the concept of controlling a vehicle on the basis of a driver-selected driving surface—an abstract idea that is not patentable under Supreme Court precedent.”

In 2019, Bentley filed two petitions with the Patent Trial and Appeal Board—a body of patent judges that rule on disputes much quicker than the larger trial system—attempting to negate Land Rover’s new claims. In them, Bentley referenced the Mitsubishi Lancer Evolution VII, Hummer H2, and Porsche 959 as three “obvious” examples that automakers, well before Land Rover’s first patent, had been selling cars with selectable on- and off-road modes.

“People are out in the world right now deciding, am I going to buy a Bentayga or a Range Rover?” Land Rover said in a hearing before the patent board in 2019. “Range Rover is the well-known leader of Terrain Response. It’s brand-defining technology, Your Honor, that Bentley has put in their vehicle.” Bentley, in one petition, said Land Rover was simply “reciting new limitations related to the conventional use of common automotive subsystems.”

By August 2019, the board denied both of Bentley’s petitions. In March and October of this year, it denied the automaker’s request for rehearings. In one response, the board said it didn’t think Bentley’s argument about the 959’s center and rear differentials being separate “subsystems” was valid. Bentley’s trove of supporting research—everything from a Hummer press kit to an Infiniti QX4 owner’s manual to Car and Driver’s own 2013 story about Porsche transmissions—wasn’t enough to invalidate JLR’s patent.

On November 19, with its lawsuit against Bentley still pending, Jaguar Land Rover filed four more lawsuits against Volkswagen Group of America, Porsche Cars North America, Audi of America, and Automobili Lamborghini America for patent infringement. On the same day, Jaguar Land Rover filed a request to the U.S. International Trade Commission to investigate the automakers under unfair competition laws and block their vehicle imports. Specifically, according to contents of the letter released to Bloomberg, Jaguar Land Rover is targeting the Cayenne, Urus, Tiguan, A6 Allroad, Q5, Q7, and Q8.

Regarding the lawsuits, a spokesman for the Volkswagen Group of America issued this statement: “The Volkswagen Group is examining the action in order to determine further steps. We will not comment any further regarding an ongoing proceeding at this stage.”

A spokesman for Jaguar Land Rover North America said the company “does not comment on ongoing legal disputes; however, protecting our Intellectual Property is something we take very seriously.”

According to the most recent lawsuits, Jaguar Land Rover wants to recoup years of back royalties and damages. The VW Group, while it has not formally responded, wants to avoid federal repercussions over illegally imported vehicles, especially after the diesel-emissions scandal of a few years ago in which it was found guilty and fined billions by the U.S. Given the pending court cases and the trade commission investigation, it’s likelier the VW Group will settle with JLR without having to formally license its current and future vehicles.

Until then, keep buying all the expensive SUVs your budget can handle and drive them in any mode you want. 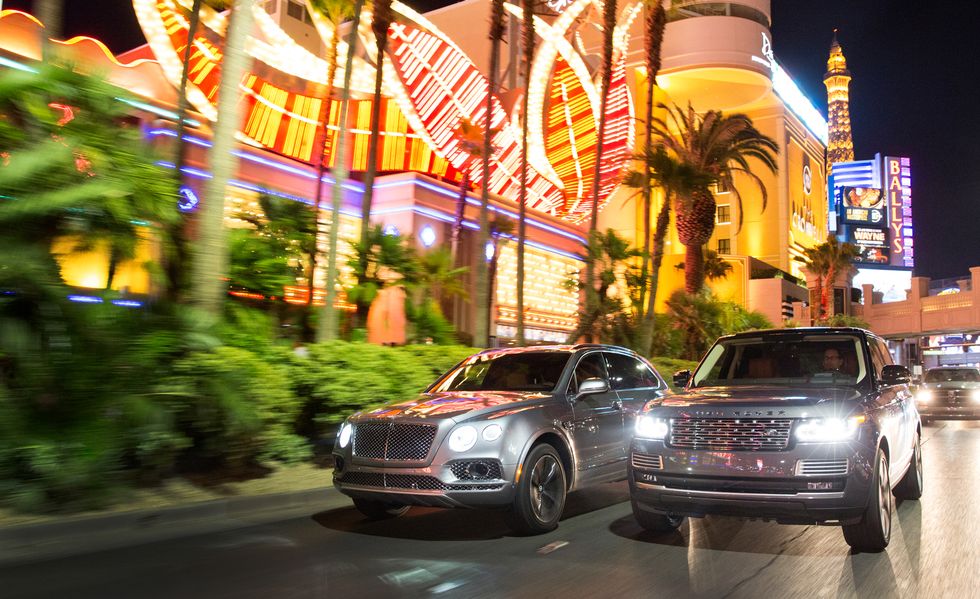