We love what we love. Jerry and Janice Huot seem to love three things: the Minnesota Vikings, the musical genius of Prince, and their 2014 Mitsubishi Mirage, in which they racked up an incredible 414,000 miles. That’s four flips of the odometer in six years in a vehicle that’s not known for its creature comforts. Just imagine how it must have been tossed around by the winds of passing semis, almost being swallowed by large potholes and buried in snowdrifts, as they traveled up and down the state of Minnesota.

The 400K adventure started, like many others, with a trip to a local showroom. While looking to trade in a Cadillac for an inexpensive vehicle with great fuel economy, the Huots came across a Plasma Purple subcompact 2014 Mitsubishi Mirage. Smitten by its color and value, they took it home. After Janice added the initial 7000 or so miles, Jerry took over the vehicle and used it for his courier business driving around Minnesota delivering medical samples from medical offices to labs. If you took a drug test in Minneapolis in the past six years, your urine might have traveled in Jerry’s Mirage.

The couple dubbed the vehicle the Purple Won, with the name on a set of vanity plates as a nod to Minneapolis’s favorite son, Prince, who was known as the Purple One. The tiny vehicle was also used to display the Huots’ love of the Minnesota Vikings by putting on a set of magnetic horn decals, as well as when Jerry dressed the Mirage in a Vikings helmet for Janice’s birthday. Outside work hours, the couple used the vehicle to haul rocks and mulch up their gravel driveway.

The Huots were nothing if not brand loyal: they’d also owned an Outlander Sport and a Montero Sport in the past. Still, their willingness to spend hundreds of thousands of miles bumping along in a subcompact requires a little context. The Mirage occupies a market segment not known for comfort. To reach 414,000 miles in six years, Jerry Hout would have to put an average of 69,000 miles of road underneath him and his Mirage per year. To accomplish that driving five days a week for work, he would be hauling medical samples about 265 miles per day Monday through Friday. That’s an incredible amount of miles and time in such a tiny vehicle.

But you can’t argue with love. Even if that love involves being crammed in the Little Economy Car That Could over hundreds of miles a day. Let’s just hope they were listening to Prince the entire time. 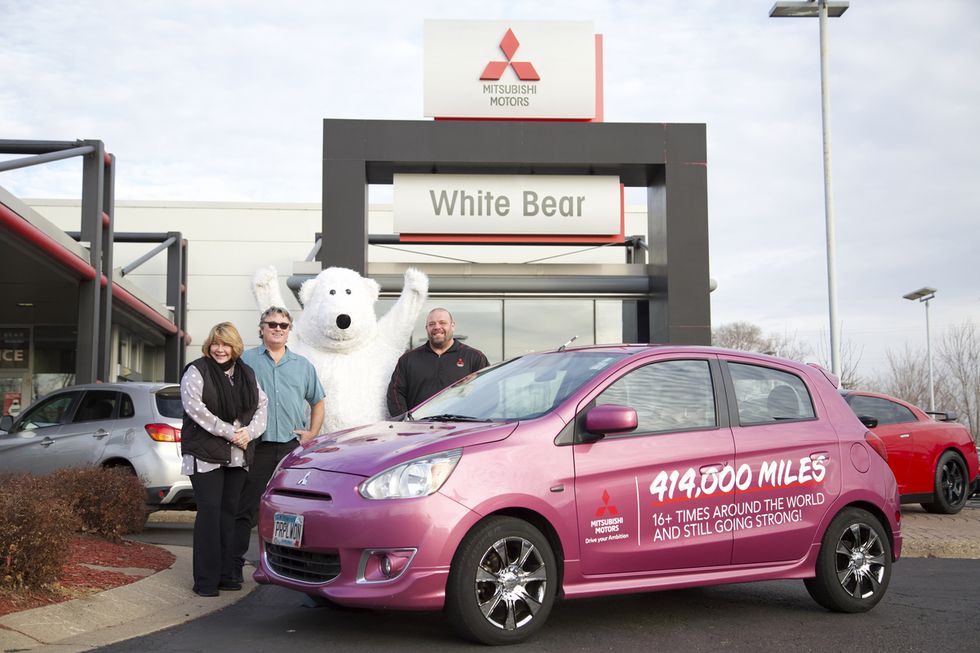