A year ago, Cadillac introduced the CT4-V and CT5-V, which were new sports sedans bearing an old name with a new meaning. See, those two sedans didn’t replace the V-badged street-legal gunships on sale from 2004 to 2019. Cadillac’s marketing department decided the 22nd letter had had its day as a solo artist at the top of the charts. Until further notice, anything marked by the letter V alone no longer had to be the best performer in a model’s lineup.

Hardcore enthusiasts looking for the ultimate snarl, crackle, and pop from America’s luxury brand must seek the word “Blackwing,” as in the 2022 CT4-V Blackwing and 2022 CT5-V Blackwing. These will be the anointed heirs to the thunder-bringers formerly known as just V. Cadillac will debut both on Monday, February 1.

This, however, will be the second time we’ve met the Blackwing as a corporate charm. Twenty-five years ago, it was also employed as a symbol of performance resurrection—except its name wasn’t Blackwing. It was Ziggy.

In fact, when tracing the Cadillac performance lineage that brings us to the new CT4-V and CT5-V Blackwings, Ziggy is a fine place to start.

In 1996—back when GM owned German automaker Opel—GM brought the Opel Omega to the U.S. and rebadged it as the Cadillac Catera. In October 1996, the New York Times explained the Catera’s mission by noting, “Cadillac hopes its new performance-oriented luxury Catera will revive its languishing image.” The rebranded import needed to be fun and handle well enough to get much younger, nontraditional Cadillac buyers to forsake the German competition.

GM marketing VP Ron Zarrella and ad agency D’Arcy Masius Benton & Bowles developed a Catera campaign around the tagline, “The Caddy that zigs.” To enliven the ads, they animated one of the six merlettes in the Cadillac crest—those are the figures that look like ducks but are actually legless, beakless blackbirds from French heraldry (martlets in English heraldry) and are said to be loosely based on swallows.

Cadillac’s ad team just called the thing a duck. And when we say “animated,” we mean they “gave him big feet, a giant beak, and turned him around” in the opposite direction of the other merlettes. They also painted him bright red and named him Ziggy. Why? Because the other merlettes “zag,” but Ziggy, like the Catera, zigs. Get it? Blackwings on a V.

Marketing is a hell of a drug, and the Catera was a hell of a comedown. Nothing about the sedan worked. The Catera was a capable handler, but we still blasted it for being too heavy and too boring. Buyers weren’t that much younger than Cadillac’s typical consumers.

Cadillac wanted Barry White for a 1997 Super Bowl commercial but couldn’t get him. Plan B was to get supermodel Cindy Crawford in a leather miniskirt bantering with Ziggy. That caused complaints from women inside and outside GM about the model and her clothing. Ziggy even upset Cadillac dealers, one complaining to the Washington Post, “We don’t need a quack as our spokesman.” Catera brand manager Dave Nottoli would later admit, “We couldn’t get people off the duck.” The marketing campaign was voted one of the worst of 1997.

The Catera lasted just five years on the market—four more than Ziggy, the original Blackwing.

Cadillac had a hit with the 2003 CTS that replaced the Catera, and it’s one of the quirks of success that a winning hand leads to more winning hands. The “Break Through” ad campaign for the CTS, keyed off the Led Zeppelin song “Rock and Roll,” was a hit, too, with Robert Plant’s vocal doubling as something of a brand promise: “It’s been a long time since I rock and rolled.” Cadillac was ready once again to make some noise.

In 2000, two years before the CTS launched, Cadillac’s global vehicle line honcho Jim Taylor told famed GM engineer John “Heinrocket” Heinricy that he wanted a 400-hp high-performance version of the CTS to compete against the Germans. When GM finally approved the model, the automaker gathered a team of hitmakers to lead the project: legendary product man Bob Lutz, who’d helped create the BMW 3-series during his time at the German automaker; Mark Reuss, who’d established and was running GM’s performance division; Heinricy; and Taylor.

The battles over which engine to use began with everyone wanting a blown DOHC V-6 for “some European flair.” All involved, plus Chevrolet, were initially against Cadillac using a Corvette engine. Heinricy told LSX Magazine that engineers had trouble getting 400 horsepower from the V-6. Both the XLR-V and STS-V that went on sale in 2006 used a supercharged version of the Northstar V-8 that Cadillac was already using. That high-tech V-8 didn’t like the CTS’s engine bay, so the development team settled on the 5.7-liter LS6 V-8 bogarted from the C5 Corvette Z06. Output totaled 400 horsepower and 395 pound-feet of torque, shoved through a six-speed manual, the only transmission available.

Cadillac engineers took the sedan to Germany to tune its reflexes at the same hallowed Nürburgring circuit where the German competitors perfected their dynamics. Product planners made everything standard in the cabin except a sunroof. Designers dressed up the exterior with aggressive but subtle tweaks like the mesh grille that’s become a totem and the V-flag badge. As for where “V” came from, Lutz told LSX Magazine that after avoiding the single-letter designations of the competition, the team “felt that ‘V’ was a unique and elegant letter” and that “there’s definitely a credible claim to say that it stands for velocity.”

As a first-time effort, the 2004 CTS-V suffered foibles like wheel hop, so in our initial review we couldn’t wring every drop from it. We managed to hit 60 mph in 5.2 seconds, ran the quarter in 13.7 seconds at 107 mph, and called the CTS-V “clearly the most ambitious effort General Motors has made to produce a sports sedan credible by BMW standards.”

Knocking on Corvette’s door to borrow another engine would be the CTS-V blueprint for the next 15 years. In 2006, the first-gen CTS-V stepped up to the 6.0-liter LS2 V-8 from the base C6 Corvette. Come 2009, the second-gen CTS-V commandeered the supercharged 6.2-liter LS9 V-8 from the Corvette ZR1. Although the second-gen still offered a manual gearbox, Cadillac reworked the LS9 to be friendly to a six-speed automatic and renamed it the LSA. This generation came with coupe and sport wagon versions, too. And a sub-eight-minute Nürburgring production-car lap record. And, holy cow, the burnouts. The third-gen 2016 CTS-V emerged with the supercharged 6.2-liter LT4 V-8 from the C7 Corvette Z06. Output was up to 640 horsepower and 630 pound-feet. The gearbox gained two more ratios but there was no more manual-transmission option. The sprint to 60 mph had been cut to 3.6 seconds and the quarter-mile flashed in 11.8 at 124 mph. We wrote that here was “a screaming supersedan out to tear the legs off the German competition.”

The V and, later, Vsport models infused the brand with the vigor it had been leaching for more than two decades before the CTS arrived. V came from nothing and earned a name for itself among the lead pack by being terrifically American, with action-hero menace in Brooks Brothers dash, big-bore guns, and Star-Spangled brio. Horatio Alger, welcome to the 21st century.

In touting the return of the merlette as a Blackwing, Cadillac executive chief engineer Brandon Vivian said recently, “The Blackwing name has come to represent the very best of Cadillac performance engineering, craftsmanship, and technology.” That’s true enough. It’s also more marketing than the substance we’d been primed for, on top of the fact that Vivian’s boast described a sedan that was slightly short of what we knew Cadillac could do.

The Blackwing name no longer denotes an engine bay hiding a 4.2-liter 550-hp DOHC V-8, nor GM’s $12-billion dream for a revitalized luxury brand fulfilling its potential—a brand leaving the nest. The merlettes on the automaker’s crest are drawn without legs and beaks. We can’t help musing that the Blackwing name is emerging from its roost without its heart.

As far as we know, the CT5-V Blackwing will carry over its last Corvette-sourced engine, the supercharged LT4 V-8. We expect the CT4-V Blackwing to stick with the 3.6-liter twin-turbo V-6 from the previous ATS-V. Of course, we’re excited for both cars—we know what Cadillac engineers can do, we’ve already been told the sedans are faster than their predecessors, and we anticipate a manual transmission in the CT5-V Blackwing to keep the row-your-own dream alive.

We’ve also been told that a rose by any other name is just as sweet. We hope that’s the case with merlettes, too. 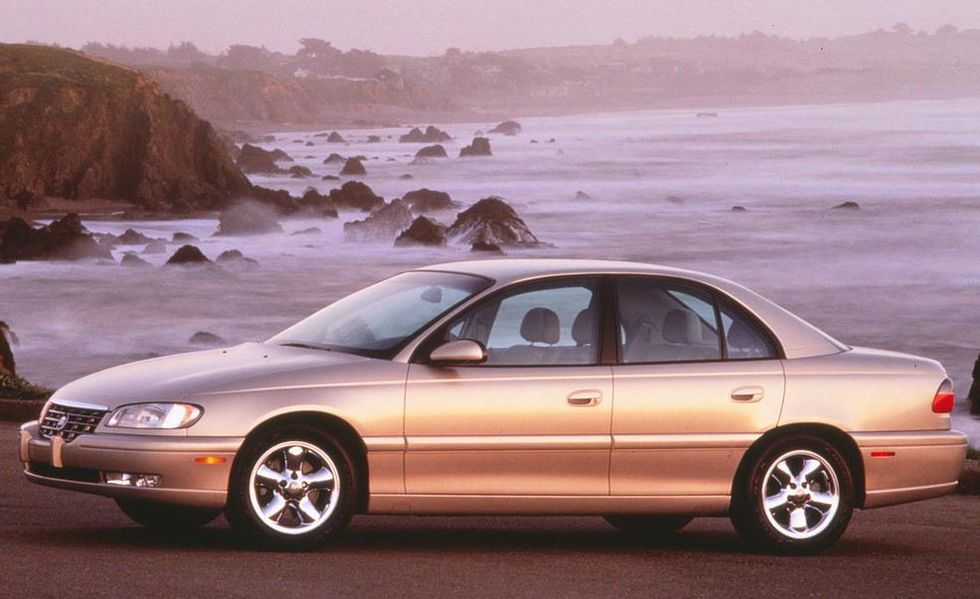