The 2023 GMC Hummer EV, which debuted in pickup truck form as an ultra-loaded Edition 1 model that costs $112,595, will eventually have cheaper models available as well as an SUV version. Today, during a GM investor video conference laying out the company’s electric plans, we got our first look at the upcoming SUV variant, which will arrive in 2023.

GMC hasn’t given much information on the new electric SUV yet—a spokesperson contacted by Car and Driver after the conference declined comment—but its lineup should align with the pickup’s. This means it could also have a highly equipped Edition 1 model as well as a three-motor EV3X and two-motor EV2X, which both come equipped with an air suspension and four-wheel steering, as well as a base EV2 model, which will have the two-motor setup but none of the aforementioned goodies. Like the pickup, expect them to come standard with GM’s Super Cruise semi-autonomous driving system, removable roof panels, and 35-inch tires.

The Hummer EV SUV will have the same imposing presence as the pickup version just without the bed. It’ll have the a modernized grille and headlights with “Hummer” pasted across then, skid plates, tall ride height, and massive tires and fender flares. The similarities should carry on to the interior as well, keeping the 12.3-inch digital gauge cluster, 13.4-inch touchscreen, and it could even have a third row of seats.

So far, we don’t have images of it other than this screen grab from the conference, also featuring Doug Parks, GM’s global product development executive VP. And we won’t see the SUV version on the road until 2023, and it should be a bit cheaper than the pickup starting at around $75,000. 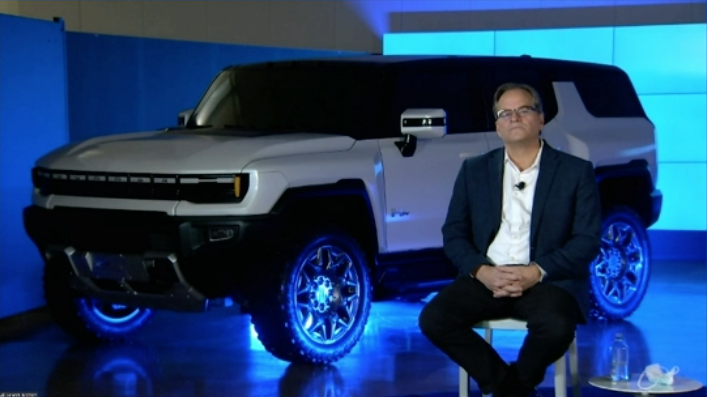