Today, only two states allow digital license plates: California and Arizona. That’s slow progress for Reviver, which formed in 2009 to change how the old, metal-based automotive technology works. But things are about to change, and 2021 is when the company will finally step down hard on the “go ahead, try it out” accelerator.

That’s according to Neville Boston, Reviver founder and chief strategy officer, who told Car and Driver that his digital Rplates will be available in Michigan by the beginning of the second quarter of 2021. Boston and his team met with Michigan Secretary of State Jocelyn Benson at an auto show a few years ago to discuss approving these non-traditional plates, and it wasn’t difficult since, in Boston’s words, Benson is a technologist. The legislation is taken care of, and now it’s just a matter of integrating Rplates with the Secretary of State’s systems and databases.

Integration is required because the Rplates do more than just take the letters and numbers of your license plate and turn them into pixels on a digital ink screen, similar to a black-and-white Kindle. By making the license plate a screen, Rplate lets people display their own (approved) messages. The plate can also warn people that the car it’s on has been stolen, or maybe to show an Amber or Silver Alert, if the state wants that functionality, Boston said. Rplate users can also pay their registration fees through Reviver, making annual renewals a paperless affair.

“You own the plate, but the message and plate number are owned by the state,” Boston said. “Think about it as a digital display until it’s actually activated and provisioned, and then it becomes a compliance tool.”

Those two aspects to the Rplate mean it has two costs, the price of the screen itself and then the subscription connection. The basic Rplate with a five-year battery is $499 and then either $55 a year or $4.99 a month. It is also available for $17.95 a month for 36 months. Everything’s a bit pricier with the wired Rplate Pro, which is the more powerful option that works best for fleets because it can offer telematics options through its built-in GPS system. The Pro costs $599 and $75 a year, or $599 and $6.99 a month to buy outright, or you can pay for it in installments of $24.95 a month for 36 months. Plus installation, of course.

Currently, a little over 4000 Rplates are running on the roads in California and Arizona, and Boston said he hopes to roughly double that number by the end of 2020. Looking ahead, between eight and 10 other states could approve the digital technology next year—Michigan first, then likely Georgia and Texas and others Boston declined to name—which is why the company claims there could be 100,000 or so in use by the end of 2021. Expansion will also be driven by dealership groups Reviver is working with to preload the battery-operated Rplate on some vehicles on their lots, as well as colleges and universities that will partner up to sell digital versions of the popular school plates.

All of this growth will move Reviver along to the next big phase of its plans: cars with built-in digital plates. That’ll take a while, but you know it’s coming.

“We’ve actually had conversations with every one of the major OEMs around that,” Boston said. The automakers want to see more people using the plates and more states approving them before making any sort of commitment, but once the number of users grows, it “will allow us to have a more substantive conversation with the manufacturers,” he said. 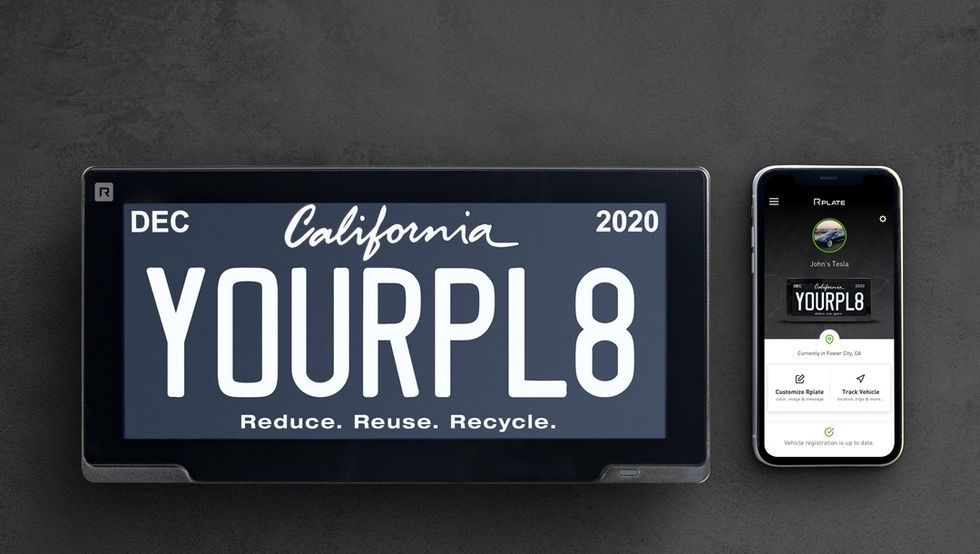