Newsom announced the ban in front of EVs from Audi, Ford, Honda, and Tesla, signaling implicit endorsement from those brands.

From the January 2021 issue of Car and Driver.

On September 23, with a devastating wildfire season as the backdrop, California Governor Gavin Newsom signed an executive order banning the sale of new combustion-powered passenger vehicles in the state by 2035. That means no new gas engines and no new diesels.

Newsom’s order now goes to the powerful California Air Resources Board (CARB), which will hold hearings before writing the regulations. For those of us with gasoline running through our veins, the order might look like sugar poured in the engine’s fuel tank. But this isn’t the finger that knocks over the first domino. It is a single domino in the middle of a chain that’s already toppling. Falling battery prices, growing concern over the effects of climate change, and surging demand for EVs in Europe and Asia are fueling the internal-combustion engine’s decline.

The major players in the global auto industry readily acknowledge that millions of vehicles will shift from having combustion engines to battery power during the 2020s. It’s the only viable, scalable way to slash the well-to-wheel carbon emissions from on-road vehicles. Before Newsom signed his order, 16 of 26 major auto-parts suppliers surveyed by engineering consultancy Ricardo said meeting mandates for 100 percent zero-emission vehicles (ZEVs) by 2035 or 2040 was achievable with existing technology. And some want to go even bigger. Fourteen said they would back such a target nationwide. In October, Oregon Senator Jeff Merkley and California Representative Mike Levin introduced a federal bill to do just that, though it is not likely to reach a vote anytime soon.

The auto industry is in near universal agreement that the future is electric. The disagreements largely focus on timing: Will people start to adopt ZEVs en masse within a couple of years or not until 2040? California is betting that technological advances, automaker investments, and consumer acceptance will propel EVs toward the tipping point sooner than later. The pool of potential EV buyers is set to grow as new models arrive in the mid-size-crossover and full-size-pickup segments in the next three years. And with battery costs falling faster than anyone predicted in 2010, carmakers say they see a path to selling electric vehicles with ranges of more than 200 miles that, crucially, make money. The Volks­wagen Group claims the batteries in its newest EVs cost less than $100 per kilowatt-hour of capacity, an oft-cited target for profitability. And GM president Mark Reuss says every model built on the company’s new Ultium electric-vehicle architecture will make money, starting with the GMC Hummer EV in late 2021. (Some analysts remain skeptical.)

Once the EV world becomes profitable to more than just Tesla (which currently relies on the sale of regulatory credits to other manufacturers to be in the black), carmakers will start to market these vehicles pervasively and competently—something they’ve utterly failed to do to date. That means touting EVs’ inherent benefits, including strong acceleration, calm and quiet powertrains, and a “full tank” every morning. Ken Morris, GM’s vice president of electric and autonomous programs, said in November that the company sees “an inflection point” in the mid-2020s when “customer adoption will increase rapidly.”

This goal of ending the sale of new cars that emit greenhouse gases isn’t unique to California. Norway was among the first to make it official policy, targeting the year 2025, and other countries have put forth their own cutoff years, ranging from 2030 to 2050 [see “Fueling Down”]. The biggest dog in this fight is China, where people bought more plug-in vehicles in 2019 than the rest of the world combined. China’s government said in 2017 that it plans to end the sale of new combustion-engine vehicles at some point to be specified later. The country intends to dominate global electric-car production the way it now dominates the solar-cell and lithium-ion-battery industries.

And within our borders, California is not alone in the fight for a cleaner atmosphere. Thirteen other states and Washington, D.C., already follow CARB’s more stringent vehicle-emission rules, and some of them—New York, New Jersey, and Washington—are now assessing similar combustion-vehicle bans. These states make up a powerful bloc in pushing the industry toward lower emissions. California accounts for roughly 11 percent of U.S. new-vehicle sales, and the entire CARB-following group represents roughly a third of the market.

There are reasons to think California won’t achieve a total ban on new combustion-powered vehicles come 2035, though. For the vision to become a reality, Newsom’s order will have to survive the inevitable lawsuits and possible interference from future presidential administrations. And even then, if history is any guide, just because California says automakers must sell ZEVs doesn’t mean that consumers will buy them.

CARB penned its first ZEV mandate in 1990, calling for 10 percent of new vehicles sold in California to be powered by battery-electric, plug-in-hybrid, or hydrogen fuel-cell tech by the 2003 model year. But for nearly as long as CARB has been setting zealous goals, the state has also had to adjust them to reflect reality. The regulations have been repeatedly pushed back and watered down as a lack of consumer demand and expensive, immature technology made initial targets impossible to hit. Through the first three quarters of the year, electric vehicles made up 6.1 percent of new-car sales in California.

While we don’t know how CARB will enact the 2035 combustion-engine ban, the logical path would expand the current mandate, which plateaus in 2025 with large manufacturers obtaining credits that represent ZEVs making up between 4 and 29 percent of their annual sales. (That wide spread reflects that, under today’s rules, every EV sold can earn between 0.55 and four ZEV credits, depending on range and charging capability. Credits can also be bought and sold among automakers.) But if EV sales don’t take off on their own, can the state really push manufacturers and consumers up the steep ramp from 6 percent today to 100 percent in 15 years?

Reacting to the 2035 ban, the Alliance for Automotive Innovation (AAI), a carmaker lobbying group, observed, “Neither mandates nor bans build successful markets . . . [and] much more needs to be done to increase consumer demand.” It called for offering more incentive programs and expanding EV infrastructure. Under the Joe Biden presidency, the AAI is likely to see those wishes fulfilled. Biden has promised to put $400 billion toward clean-energy projects, including the creation of 500,000 new charging stations by 2030 and the expansion of the federal income-tax credits for EV purchases.

In the end, whether California achieves its ban on gasoline and diesel engines or merely pushes ZEV adoption further may be irrelevant. The implicit purpose of the policy is to move the goal posts—to nudge automakers to offer more compelling electric vehicles with more variety sooner. It exists to accelerate the inevitable transition to battery power, which it is all but guaranteed to do. 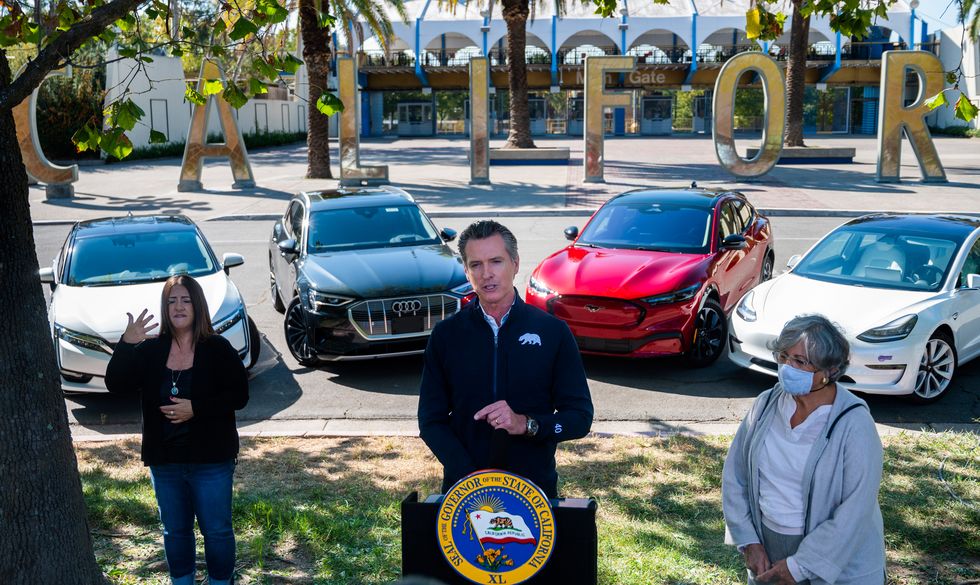