We’ve likely all been in this situation: You’re driving along when a stopped school bus appears around a bend. You quickly slow down because the children are our future and try to lower your pulse rate. Well, Audi and two partners, Applied Information and Temple, Inc., are working with the state of Georgia to bring cellular vehicle-to-everything (C-V2X) to school zones and buses using the 5.9-GHz cellular network.

The system is in the early phases of testing and will be conducted in two phases in Alpharetta, Georgia, home of the Infrastructure Automotive Technology Laboratory. The first will alert drivers when they are approaching a school zone and can be modified to share that information based on when the school is open and children are present. The second phase will include specially outfitted school buses that will broadcast messages to approaching drivers of its location and that passing the bus is not allowed. Both tests will use specially outfitted Audi e-tron test vehicles. The project is expected to be completed in the first half of 2021.

C-V2X uses cellular networks to create connections between vehicles and infrastructure. The school signs would be a roadside unit (RSU) that transmits data while the buses would have on-board units (OBU) inside the vehicles that share data. The specially equipped e-trons would connect to the local network and would display information transmitted by the signs and buses.

Audi already uses a V2X system for traffic-light countdown in cities including Las Vegas. After the test has been completed and if enough school districts implement this system, don’t be surprised if future vehicles become a bit more aware of school zones. 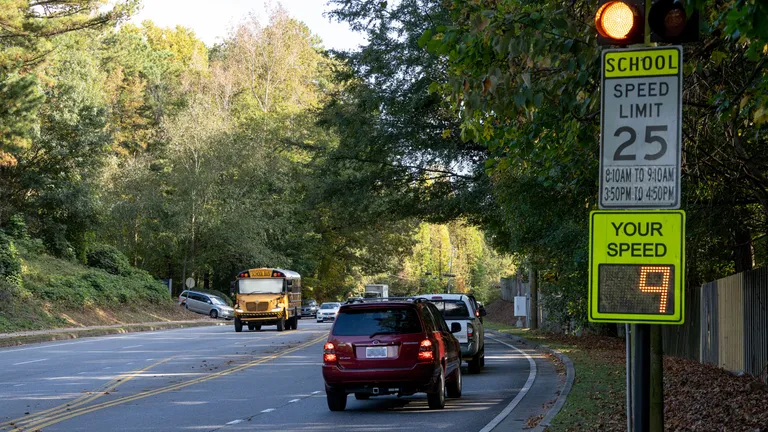