Whenever a hotly anticipated TV show drops onto a streaming platform it creates a frenzy as fans rush to binge—or carefully ration—the new allotment of episodes. The fourth season of The Crown has occupied Netflix’s number-one slot on both sides of the Atlantic, with the dramatized story of the real-life soap opera that is the British royal family having now reached the 1980s. While there’s been some criticism over the show’s accuracy over certain bits of history, we can report that the automotive casting is, for the most part, both excellent and accurate. And there are so many cars worth seeing:

Seen throughout the season, Prince Charles (played by Josh O’Connor) drives himself in a lovely Aston Martin DB6 Volante very similar to the real one, which the real prince bought in 1971. The show car comes from 1968 and is therefore an earlier Mk 1, and it is also finished in green rather than the correct Seychelles Blue.

But still impressively close; Prince Charles still owns the original, which has been converted to run on E85 fuel made in part from bio-ethanol from wine and cheese by-products. He’s shown here during an appearance in early 2020.

Gillian Anderson’s Margaret Thatcher is scarily convincing in terms of both accent and facial expressions. Her character’s car selection is similarly accurate. The newly installed Prime Minister arrives at Buckingham Palace for her first meeting with the Queen in a Rover P5B, just as the real Thatcher did. The V-8–engined Rover had actually been retired for five years when Thatcher became Britain’s first female PM, but—like her predecessors—she reportedly preferred its staid lines to those of the sleeker, wedgy Rover SD1 that replaced it.

Later on in the series, Thatcher is seen being chauffeured in a Daimler Sovereign 4.2, a posher version of the contemporary Jaguar XJ, and again true to life.

The Queen spends more time being driven around than driving during Season 4, although the production company hasn’t tried to re-create one of the extra-tall “state landaulette” Rolls-Royces used for ceremonial duties. Colman’s character is seen riding in both a James Young coachbuilt Phantom V and the Mulliner Park Ward Phantom VI shown here. The VI used for filming has been either wrapped or digitally recolored and was originally built for a member of the Saudi royal family; its previous film credits include Four Weddings and a Funeral.

Later in the season, the Queen also travels in a prototypical Daimler DS420 limousine—the real royal family had five examples delivered between 1970 and 1992. In this scene, Lady Diana Spencer is being brought in the Daimler to visit the royals at Balmoral.

Little known outside its native land, the Mini Metro was launched in 1981 under the grandiose tagline “a British car to beat the world.” It didn’t. Intended to be a replacement for the original BMC Mini, it used the same combination of a transverse A-series engine with a gearbox that shared its sump oil and subframe mounted independent suspension at both ends. The real Lady Diana Spencer did indeed drive a basic version while working in a nursery in London, which became one of the most photographed cars in the world as the paparazzi obsessively documented her life in the runup to her wedding to Prince Charles. The Crown’s production team have made an impressive effort to find a very similar sunroof-fitted example for actress Emma Corrin to drive, albeit in a slightly darker shade of red.

While most heads of state usually only experience cars from the back seat, Queen Elizabeth has always been keen on taking the wheel. She trained as a British army mechanic and driver during the Second World War and has demonstrated both aptitude and enthusiasm for piloting herself and sometimes other world leaders ever since. Olivia Colman’s character is seen driving a LWB Land Rover Series 3 station wagon during a hunting party on the Balmoral estate in Scotland that’s finished in an appropriate shade of what the British often refer to, in reference to the nation’s favorite hue of gumboot, as welly green.

The real Prince Philip’s love for Land Rover products has been a long one, having run them throughout his time as the Queen’s consort and effectively ending his driving career with a substantial crash in a Freelander 2 in January 2019. Three years before that he surprised Barack Obama by driving the then president and first lady around the Windsor royal estate at alarming speeds. While the production company’s choice of a first-generation Range Rover for Tobias Menzies’s Prince in Episode 3 is spot-on, eagle-eyed viewers will spot the use of a LWB LSE example, a version that didn’t go on sale in 1992—long after the scene is set.

One of this season’s non-royal storylines comes with Mark Thatcher’s ill-fated entry to the 1982 Paris-Dakar Rally as a co-driver, one that resulted in the Prime Minister’s son (played by Freddie Fox) getting stranded in the Sahara with two others crew members after the car’s rear suspension broke (he later admitted, “I did absolutely no preparation. Nothing.”) The production team have created an impressively accurate replica of the boxy Peugeot with the same sponsor decals and even a roll cage. After six days in the desert—and an expensive air search at the behest of the British ambassador in Algeria—Thatcher and his teammates were spotted and rescued.

While many viewers of The Crown will doubtless regard one Rolls-Royce convertible as being as good as another, we know different. The decision to use a stylish Rolls-Royce Silver Cloud III convertible for the scenes of Charles and Diana waving to the crowds during their 1983 Australian tour doubtless made sense given the constraints of filming the scene, which was actually done in Spain.

The actual royal visit featured an earlier (and even more stylish) Silver Cloud I convertible. These details matter.

Another above-and-beyond piece of car-casting has led to the creation of a very accurate replica of the Jaguar XJ-SC cabriolet that Princess Diana acquired in 1987. The company later created a fully convertible XJ-S, but the cabriolet had fixed window frames and a targa-style roof. Diana specified hers be built with both North American–style twin headlights and rear seats so she could use it to transport the young princes William and Harry around, the regular cabriolet being a two-seater. Both details are accurately recreated on the car used for filming, although it carries a non-prototypical Northern Irish registration. The real Diana clearly had a taste for open-topped motoring, replacing the XJ-S with a Mercedes SL500, and then that with an Audi 80 cabriolet.

Even Britain’s most resourceful filmmakers often struggle to create convincing period U.S. streetscapes, and so it proves in The Crown. Diana’s 1989 trip to New York was actually filmed in Manchester, England, with the help of a significant number of digitally added backgrounds. The U.K.’s limit supply of Eighties American metal also means the same background vehicles appear in almost every long shot, including a trio of Checker cabs that would have been getting pretty thin on the ground in NYC by that time. Diana is driven in a fine Cadillac Brougham limo; our attempts to gauge the accuracy of this have been stymied by the tendency of contemporary photographers to take pictures of the Princess’s outfits rather than her method of transport.

For the scenes set in the U.K., The Crown’s set dressers have been much more successful at creating an environment where the background cars chosen feel overwhelmingly right. Fans of obscure British metal will be able to spend happy hours taking in rare (to us) automotive sights with numerous examples of carefully sourced period cars. We spotted examples of the Ford Cortina, Granada, and Sierra, several Vauxhall Cavaliers, a Rover SDI, and the unsurprising addition of a classic FX4 black cab. There’s also a fine cameo from an E30 BMW 318i. See if you can spot any others! 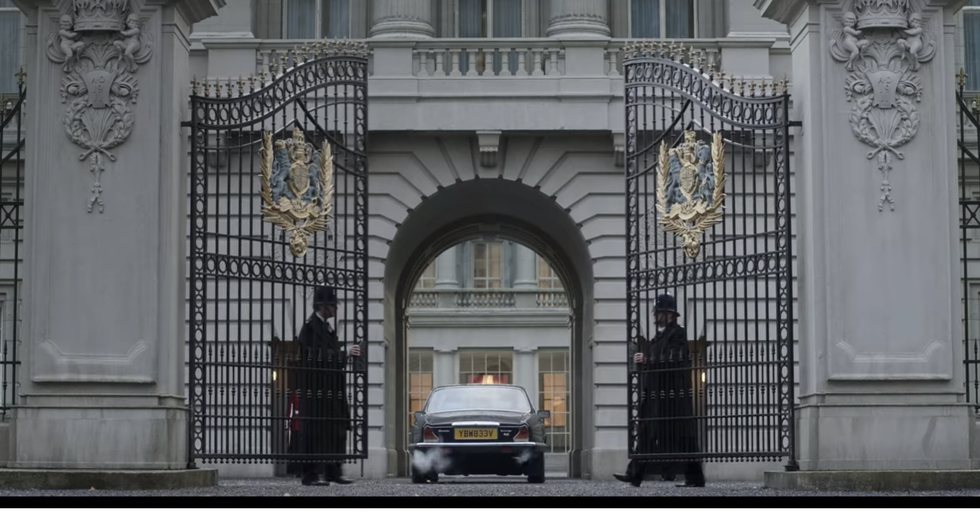