Building a car specifically for driving enthusiasts isn’t exactly a smart business plan. The real money is in crossovers, a.k.a. small SUVs, a.k.a. really tall hatchbacks. Fortunately for fans of rear-wheel drive, manual transmissions, and fun that won’t require you to dip into your 401(k), Subaru and Mazda have built such cars: the BRZ and the iconic MX-5 Miata.

These natural rivals both have naturally aspirated four-cylinder engines, six-speed manual transmissions (automatic transmissions are available, too), and rear-wheel drive. These features come together in both cars to create a driving experience that makes every corner a delight. That’s tough to come by for less than $35,000. The question is, which to choose? Here’s how they match up: Neither vehicle can be described as necessarily fast. But the new 2022 BRZ does widen the horsepower gap between the two vehicles. The current Miata uses Mazda’s 2.0-liter Skyactiv four-cylinder engine, which pushes 181 horsepower and 151 lb-ft of torque. That’ll soon come up against the 2022 BRZ’s 228 horsepower and 184 lb-ft of torque from the larger 2.4-liter four-cylinder boxer engine. The 2020 BRZ’s current 2.0-liter, 205-hp engine is offset by its 2815-pound curb weight up 474 pounds over the Miata’s 2341 pounds of fun. But Subaru promises more power without more heft with the 2022 BRZ; it will likely stay the same weight, an estimated 2815 pounds for the Premium model or 2835 pounds in Limited trim, Subaru says. Advantage: BRZ. Let’s face it, both of these vehicles are a blast on any road with curves. Neither vehicle is necessarily fast when compared to offerings from BMW, Audi, or some of the American muscle that’s been revived in the past decade. Instead, the joy is derived from suspension and weight distribution that make every time you downshift and launch out of a turn a delight. But which is more fun? While it’ll be a while before we get our hands on the 2022 BRZ, it still won’t offer the top-down fun of the Miata. If you love the feeling of the wind in your hair and the sun on your face, you can’t beat a roadster. Advantage: Miata. The Miata has what can be technically called a trunk. But if you need to actually haul anything more than a few grocery bags, the BRZ wins. It has an actual trunk, and the almost worthless rear seats in the two-plus-two sports car fold down to offer up even more room. The Miata has 4.6 cubic feet of cargo space, while the current BRZ (with the rear seats up) has 6.9 cubic feet of cargo space. The BRZ is a more day-to-day livable machine in that respect.

Then there’s the issue with tall drivers. With the top up, the Miata can feel claustrophobic for those standing above six feet in height. This Subaru won’t end up being the go-to vehicle for professional basketball players, but it does offer more space for tall people. Advantage: BRZ.

The Winner Is You

The Subaru has more power, but the Mazda is a convertible. The Miata is cheaper, but you can actually stop by the store and buy a week’s worth of groceries with the BRZ after a day of mountain driving. Both will put smiles on the faces of enthusiasts who would rather shift gears than sit above everyone else on the road. Mazda and Subaru don’t have to build these cars; the real money is in SUVs. But whichever one you pick, BRZ or Miata, you’ll be thankful that both companies still value fun that’s a value. 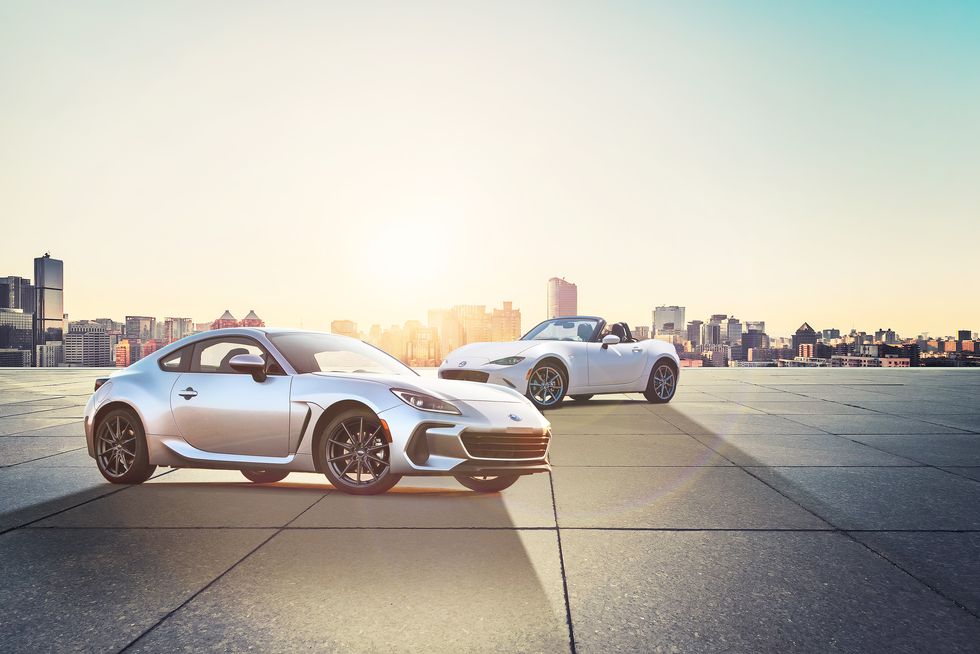