Hyundai has revealed plans about its new all-electric Ioniq subbrand, and we’re getting prepared for the debut of its first model, the mid-size Ioniq 5 crossover. We already knew that it’s inspired by the company’s 45 concept, and now we’ve learned that it’ll ride on Hyundai and Kia’s new E-GMP platform. The latter uses an 800-volt architecture that provides impressive charging speeds. We also expect the new Ioniq EV to have a driving range that’ll approach 300 miles or more. Despite our lack of full details, here’s what we know so far.

The Ioniq 5 will mark the debut of Hyundai’s all-new, all-electric Ioniq subbrand, which the company says will usher in 23 battery-electric vehicles by 2025.

Hyundai hasn’t so much as hinted at how much the upcoming Ioniq 5 will cost, but it has said that it’ll launch in early 2021. Since the current Hyundai Kona Electric starts at about $38,000, we estimate the Ioniq 5 will open at about $45,000.

Other than having an electric-only powertrain, we’re not quite sure what to expect from the Ioniq 5 in terms of performance. While the Kona Electric is motivated by a 201-hp electric motor, we think the mid-size Ioniq 5 will have more juice than that. We’ve also learned that the new E-GMP platform will provide rear- or all-wheel drive. We’ll have to learn more about the upcoming EV and get behind the wheel before we can comment on its driving behavior.

We have no idea how large the battery pack that will power the Ioniq 5 will be, but Hyundai expects it’ll provide a driving range of 310 miles, based on the WLPT scale. The Ioniq 5 will also feature fast-charging capability, which is said to allow its battery to recharge to 80 percent in as little as 18 minutes. Only have five minutes to spare? Well, Hyundai says that should recoup about 60 miles of range.

Since neither Hyundai nor the EPA have released any information about its efficiency, we have nothing to report here. Once those details come out, and we have the opportunity to test one, we’ll evaluate how efficient the Ioniq 5 is in the real world.

Based on the 45 Concept, the Ioniq 5’s interior will take advantage of its all-electric packaging, which should provide a completely flat floor for maximum passenger and cargo space. While we don’t expect the concept’s sliding doors to reach production, it’s more possible that the enormous display that spanned nearly the entire dashboard could be part of the final product. We’d also like to see the Ioniq 5 bring back the front seats that swivel. That’s a feature that used to be found on classic cars but has somehow fallen out of favor.

Hyundai says that its new Ioniq subbrand will emphasize connected living, which suggests the Ioniq 5 could have a host of innovative infotainment and connectivity features. This surely means specific smartphone-integrated apps as well as advanced voice-recognition technology. Of course, we also expect to see popular content that includes Apple CarPlay, Android Auto, and a Wi-Fi hotspot.

The Ioniq 5 hasn’t been crash tested by the National Highway Traffic Safety Administration (NHTSA) or the Insurance Institute for Highway Safety (IIHS). While Hyundai hasn’t said what driver-assistance technology will be available on the all-electric crossover, we expect it to have a host of standard and optional safety features.

Hyundai provides one of the best warranty plans in the industry, and we expect the same coverage to protect the Ioniq 5. Likewise, it should come with an impressive amount of complimentary scheduled maintenance. The company’s current warranty terms are: 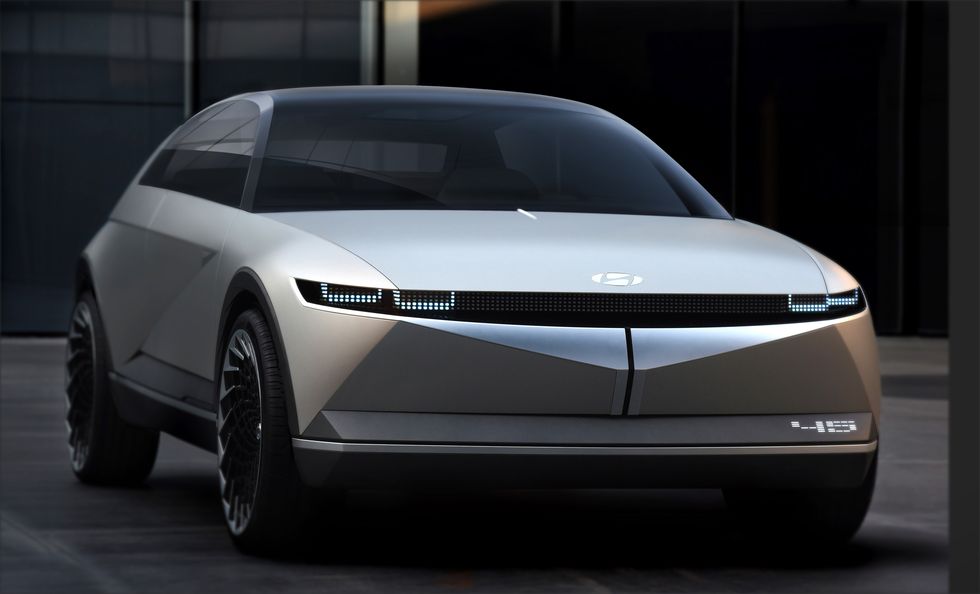