Hyundai’s performance strategy can be confusing, but it basically plays out like this: N Line is to Hyundai as Si is to Honda. If you see just the letter N, that denotes a track-ready car, like the Civic Type R. You need to know this because the whole thing is about to snowball. What began with the impressive Veloster N in 2019 will explode into seven N Line and N performance models by the end of 2022.

At the heart of it will be the 2022 Hyundai Elantra N, which marries the all-new 2021 Elantra sedan with the seriously good high-performance hardware of the Veloster N hatchback, including its 276-hp 2.0-liter turbo four, electronic limited-slip differential, and adaptive dampers. When it arrives in late 2021, it will sit one considerable notch up in power and performance from the 201-hp Elantra N Line and will take on the Type R version of the 11th-generation of the Civic, whatever that may be.

With the exception of their camouflage, both Elantra N prototypes we drove seemed production ready. There’s no duct tape holding the door panels together, no chicken wire hidden beneath the wrap, which is hiding a sizable rear spoiler, a tweaked front fascia, a new rear bumper with a diffuser, and pronounced rocker moldings. The front air dam is deep enough to make you pause before entering driveways. It wears the production wheels, which feature an elaborate triangular pattern, and the two big exhaust pipes are exclusive to the N model.

Inside the sedan gets the same firm, properly bolstered sport seats and the three-spoke steering wheel as the Veloster N. Also shared with the Veloster N are the five distinct driving modes, including an N Custom mode, which allows you to tune the throttle response, steering heft, suspension damping, rev matching, stability control, and exhaust note as you see fit. The Elantra’s new digital gauge cluster is clean and simple with two traditional-looking instruments—a 180-mph speedometer on the left and an 8000-rpm tachometer on the right. In the center, you can choose to display more instruments, including gauges for boost and oil temp, a g-meter, or a lap timer.

Hyundai brought two prototypes to give us a taste of each transmission. A six-speed manual with rev-matching capability will be standard, and a dual-clutch eight-speed automatic shared with the Sonata N Line and Veloster N will be optional. Both wear Pirelli P Zero PZ4 235/35R-19 summer tires with a 280 treadwear rating, which will be on the production car and match the Veloster N.

The six-speed is up first and draws a thumbs-up from a guy in a new Mercedes-AMG E63 Sas we pull onto Sunset Boulevard in Los Angeles’s hip West Hollywood. We head for the Pacific and the twisty two-lanes that carve up the Santa Monica Mountains. The clutch is light with a well-defined pickup point. The shifter is also light but precise and satisfyingly mechanical. The ride is firm. It rounds off the large impacts well, but there’s some chop over the city’s rippled concrete freeways. At 75 mph, top gear puts the sedan’s turbo-four at 2700 rpm, high enough for a quick response from the turbocharger. There’s plenty of passing power without dropping down to fifth.

Get off the line with any aggression, and the N’s low-end power—all 289 pound-feet of torque, which is 29 pound-feet more than the Veloster N, are available from about 1500 rpm—sends both front Pirellis up in smoke. Hyundai lets you deactivate the traction and stability-control systems if tire destruction is your thing. Horsepower peaks at 6000 rpm, but the 2.0-liter happily revs past that point with a strong pull until it touches a soft rev limiter at 6750 rpm. Get the power down, and it might match the acceleration of the Veloster N, which hit 60 mph in 5.2 seconds at our test track.

It sounds good, too, and there are three settings for its active exhaust system that could be named: Pleasant; They Can Hear You Coming From A Mile Away; and Okay, That’s Obnoxious. In the louder settings it braps, pops, cracks, and crackles when you lift off the throttle or change gears, which is cool, but it also drones on the highway.

Second gear is good for 63 mph, which is perfect for the tight corners of Latigo Canyon Drive, where the Elantra N shows impressive grip, a firm brake pedal with good modulation, steering clarity, and serious pace. Hard sustained runs fail to cook the brakes, which are also borrowed from the Veloster N with 13.6-inch front and 12.4-inch rear rotors.

Despite the Elantra’s new platform and longer wheelbase, its engine is still mounted ahead of its front axle line, but like the smaller Veloster, it turns in quickly and is well-balanced. In its firmer settings, the suspension is choppy over rough patches, but grip and the sedan’s stability aren’t adversely affected. The stiffest of the three settings is really tuned for a track day. Unlike the standard Elantra, the N Line and N have an independent rear suspension.

Opt for the dual-clutch automatic and you also get launch control, however, the system wasn’t active during our drive. “We’re still tuning it,” a Hyundai engineer said. When it’s done, he says the car will probably rev to more than 3000 rpm before engaging the clutch. Launch control might make the Elantra get off the blocks quicker, although the automatic’s shorter gearing adds a gear change to the run to 60 mph, which will add time.

Fingertip-ready paddle shifters on the back of the steering wheel feel solid, and there’s no slop in their action. Gear changes up and down are sharp but smooth and properly quick. It feels just as good around town as it does in the hills, and its response is adjustable. Turn it all the way up, and it gets smart like Porsche’s PDK automatic, finding the right gear under braking before each turn-in point all on its own. DCT-equipped cars will also get a sunroof and an electronic parking brake.

Two years ago, we put the Veloster N in the ring with the almighty Civic Type R, and it impressed but finished a solid second. It just couldn’t match the overall speed or sophistication of the Honda, but it also cost thousands less. Hyundai is inching closer, though, and the 2022 Elantra N looks like it’s going to be seriously good. We’ll know more when we test the full production version sometime in 2021. 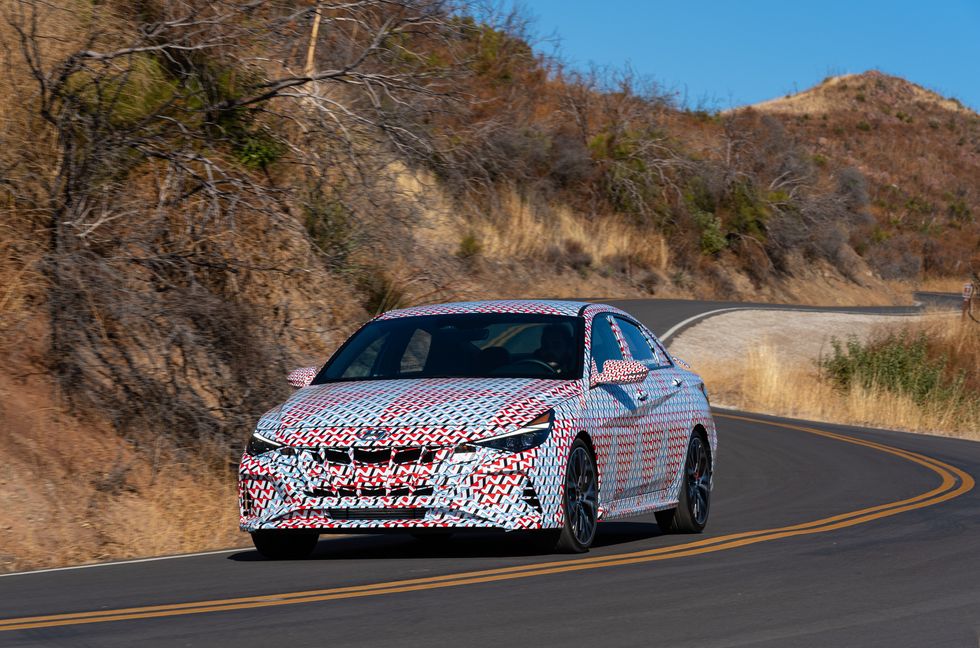