Although it looks nearly identical to its gasoline-powered counterpart, Ford’s 2022 E-Transit full-size van packs an all-electric powertrain and an estimated 126-mile driving range. The electric cargo van—we expect a passenger version to enter the market in the future—is powered by a 266-hp electric motor that drives the rear wheels. The E-Transit’s 67.0-kWh battery pack can be charged on a DC fast charger to add 30 miles of range in just 10 minutes. Inside, a 12.0-inch touchscreen infotainment system is standard, and a 4G LTE modem provides connectivity options for fleet customers to help optimize their business’s efficiency., The E-Transit will compete against gasoline-powered alternatives such as the Mercedes-Benz Sprinter and the Ram ProMaster, but Mercedes has its own electrified van called the EQV that could make its way stateside to challenge the Ford on its home turf.

When it goes on sale in late 2021, the 2022 E-Transit will be a new nameplate for the Ford lineup. The E-Transit will serve as a third all-electric offering from Ford, sitting alongside the Mustang Mach-E SUV and the F-150 Electric pickup truck.

Ford says the cheapest version of the E-Transit cargo van will start at just under $45,000 but we aren’t sure exactly how that model will be equipped; there will undoubtedly be option packages offered. Ford hasn’t released information on a passenger-hauling version, but we expect such a model to arrive shortly after the E-Transit’s debut. When we find out more information about exact pricing and feature availability, we’ll update this story with results.

A single electric motor pumps out 266-hp and 317 lb-ft of torque; the E-Transit employs a rear-wheel drive setup; all-wheel drive is not available. Ford hasn’t released any zero-to-60-mph time estimates but we expect the E-Transit to offer perky acceleration, at least when unladen. The company does say that the E-Transit’s suspension system has been revised from the gasoline-powered Transit’s to improve handling. When we get a chance to test drive the E-Transit we’ll report our driving impressions here.

A towing capacity for the E-Transit is unknown for now, but Ford says maximum payload for the cargo van should be close to 3800 pounds. Special cutaway models—also known as chassis-cabs, which are converted by fleets into box trucks, ambulances, and moving vans—could offer payload ratings as high as 4290 pounds.

The E-Transit’s battery pack is a 67.0-kWh unit that’s good for up to 126 miles of driving per charge, Ford says. The pack can be recharged using either AC power outlets or via a DC fast charging station. Ford will provide a mobile charger that can be used to charge the E-Transit at home and will also offer a more powerful charging station that can be installed in a buyer’s garage. Otherwise, drivers can re-juice at public charging stations.

The EPA hasn’t released any estimates for the E-Transit’s fuel economy. When we get the chance to test the E-Transit for ourselves, we’ll subject it to our 75-mph highway fuel economy test and update this story with MPGe and driving-range results.

At launch, the E-Transit will be offered solely as a cargo van but we expect a passenger-friendly model to follow. As a workhorse, the E-Transit’s cabin is utilitarian, with rubberized flooring, durable plastic trim, and cloth seat upholstery. Both standard-height and high-roof models will be offered, as well as normal and extended-wheelbase bodies. From photos we can see a rotary shift knob versus the lever that’s offered in the regular Transit. Cargo space will be plentiful no matter which body style is chosen, but the extended-wheelbase model with the high roof is said to offer more than 487 cubic feet of cargo room.

All models of the E-Transit will come standard with a 12.0-inch infotainment system which dwarfs the 4.0-inch display in the regular Transit. It’s even larger and more sophisticated than the regular Transit’s optional 8.0-inch display as it runs Ford’s latest Sync 4 operating system. An on-board 4G LTE modem provides a Wi-Fi hotspot and also connectivity features for fleet managers, including vehicle telematics. The infotainment system is capable of receiving over-the-air updates. Ford hasn’t said for sure, but we expect both Apple CarPlay and Android Auto to be standard features.

Neither the National Highway Traffic Safety Administration (NHTSA) nor the Insurance Institute for Highway Safety (IIHS) have released crash test data for the E-Transit, though the regular Transit models earned four stars from NHTSA. Ford says the E-Transit will come standard with a suite of driver-assistance features called Co-Pilot360 with more advanced driver aids available as options. Key safety features include:

Ford’s standard warranty package is fairly basic and falls in line with the industry norm. Buyers seeking additional warranty coverage should consider the gasoline-powered Nissan NV, which provides longer powertrain coverage. The E-Transit is expected to offer an eight-year/100,000 mile warranty on its battery components, but we don’t expect Ford to offer any complimentary scheduled maintenance plans. 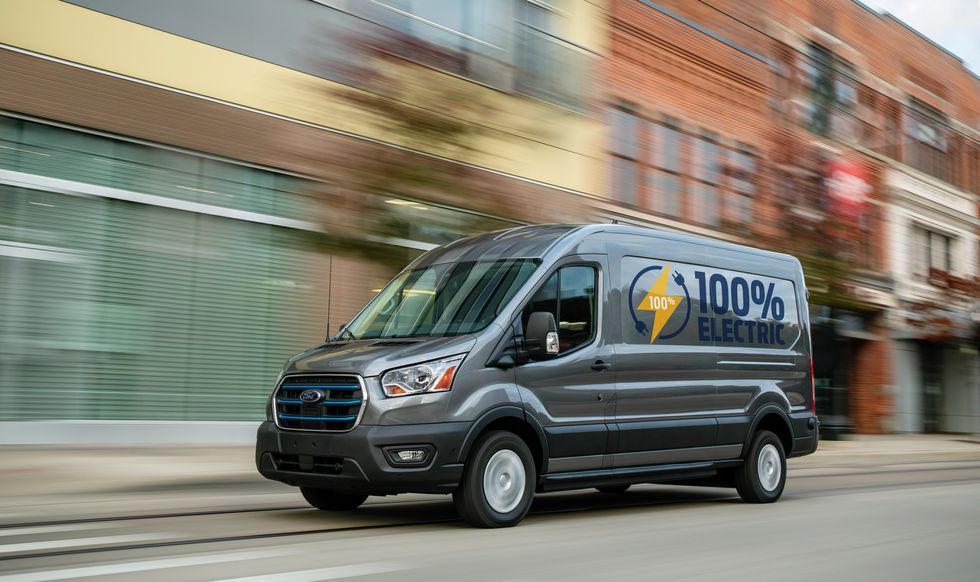