Based on the Vision iNext concept that BMW showed back in fall 2018, the production 2022 iX will be the brand’s first all-electric compact SUV—and it’s shaping up to be mighty compelling. BMW says the iX should go on sale in early 2022 and offer an electric driving range of at about 300 miles per charge. Two electric motors provide full-time all-wheel drive, and carbon-fiber reinforced plastic body panels help save weight. The iX’s cabin appears to be quite spacious with plenty of modern technology features on display, including a slick curved digital instrument panel screen. When the iX reaches U.S. dealerships, it will find itself competing with rivals such as the Audi e-tron, the Mercedes-Benz EQC, the Tesla Model X, and the upcoming Rivian R1S.

The iX will be an all-new and all-electric model in BMW’s lineup when it appears in early 2022.

BMW has not released any information about the iX’s available trim levels, nor has it confirmed any standard or optional features. When we find out more about how the iX will be equipped, we’ll update this story with details.

BMW says the iX will offer around 500-hp combined from its two electric motors, and claims it’ll go zero-to-60-mph in less than 5.0 seconds.

We don’t know the size of the iX’s battery pack yet, but BMW says it will offer around 300 miles of driving range per charge. BMW’s i4 sedan, which is expected to go on sale in 2021, is said to carry an 80.0-kWh battery pack, which may be the same unit destined for the iX. DC fast charging capability will be standard and is said to be able to juice the iX’s battery with enough electrons to provide 75 miles of driving range in just 10 minutes. BMW has partnered with EVgo to provide a network of public charging stations for iX drivers.

The EPA has not released fuel economy estimates for the iX yet, nor has it confirmed BMW’s claimed 300-mile driving range. When we get a chance to test the iX on our 75-mph highway fuel economy test route, we’ll update this story with range and MPGe results.

The Bimmer SUV is said to be about the same size as the company’s mid-size X5 and X6 crossovers, and its passenger and cargo space is expected to be similar to those models as well. The iX’s interior design is both simple and modern with a host of high-tech elements including a large curved touchscreen instrument panel and a hexagonal-shaped steering wheel. BMW will offer a large panoramic sunroof featuring electrochromic shading as an option—a trick feature found on only a few vehicles. Power front seats are also heated and feature integrated speakers for the iX’s stereo system; both faux-leather and genuine leather upholsteries are offered but BMW will also offer a textile seat fabric option—dubbed Loft—which uses microfiber cloth.

A large 14.9-inch infotainment display combines with a 12.3-inch digital gauge display to create the iX’s tech-forward dashboard design. The software allows for customization of menus and graphics, and we expect Apple CarPlay and Android Auto to be standard across the board. Other expected features are wireless smartphone charging capability and an on-board Wi-Fi hotspot. An 18-speaker Harman/Kardon stereo system is standard but BMW will also offer a 30-speaker Bowers & Wilkins setup as an option.

The National Highway Traffic Safety Administration (NHTSA) and the Insurance Institute for Highway Safety (IIHS) have not released crash test data on the iX, but we expect to see such results closer to the SUV’s on-sale date. BMW has not detailed what kind of driver-assistance features the iX will offer or whether they will be standard or optional, but an array of exterior cameras and a promise of a powerful on-board computer indicate there will be advanced autonomous or semi-autonomous self-driving capability. Key safety equipment is likely to include:

The iX should come standard with the same warranty coverage as BMW’s other electrified models—the i3 hatchback and the i8 sports car—which would mean basic coverage for four years or 50,000 miles and more generous protection for the electric-vehicle components. All new BMWs also come with a three-year complimentary maintenance plan. 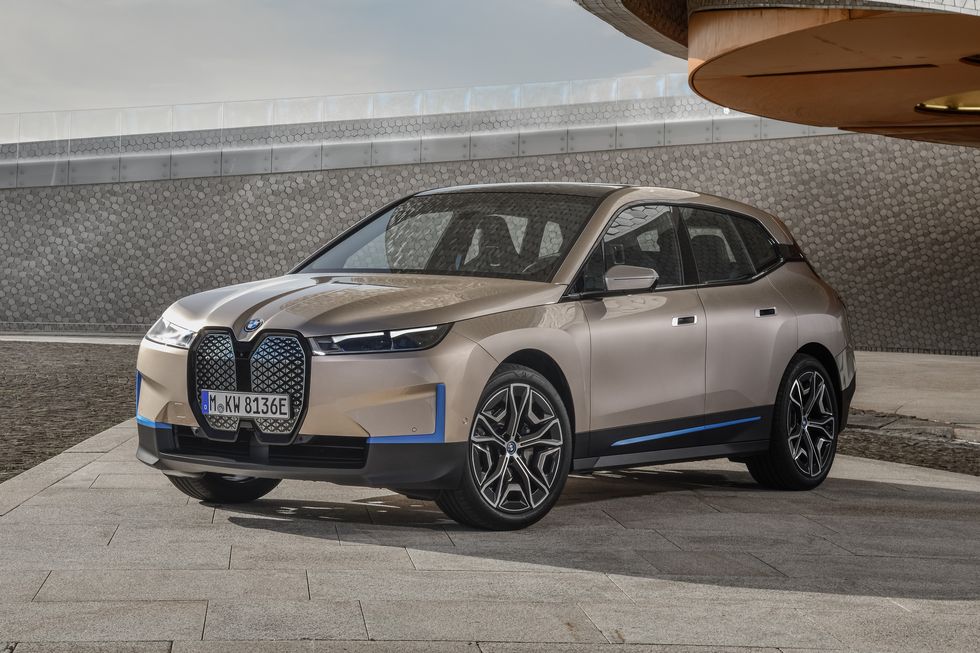