It has been a while since BMW was an electric pioneer. The launch of the carbon-bodied i3 in 2013 was so far ahead of the curve, it was practically in another race. But in more recent years BMW pretty much stepped out of the competition, watching from the sidelines as rivals launched brawnier and longer-range EVs. That is set to end with the forthcoming iX, seen here for the first time, and due to reach the U.S. in 2022—an SUV that is set to combine an output of around 500 horsepower with a targeted range of 300 miles on the EPA’s FTP-75 test procedure.

Anyone eagerly awaiting the specifics of the electric powertrain is set to be disappointed, with BMW having only released very limited details. We’re told the iX will use two electric motors—one driving each axle—and have a zero-to-62-mph time of under five seconds. We’re also told to expect a total system output of around 500 horsepower.

Based on a visit to BMW’s development center in Munich in 2018, we can add some to that. Like the brand’s other electrified models, the iX will use the compact water-cooled externally excited synchronous motors that BMW has developed and will build itself. Although we don’t have specifics on the battery pack, we know it will be mounted underfloor and use rectangular cells and an actively cooled bottom plate; BMW says we should expect the iX’s headline capacity to be over 100.0 kWh. It will also support DC fast charging at rates of up to 200 kW. In the unlikely event of finding a charger capable of delivering that, the iX can be replenished from 10 to 80 percent in under 40 minutes. BMW says an 11-kW charger will be able to fully charge the battery from empty in around 11 hours.

Design is certainly striking. Anyone hoping that the angry-squirrel grille of the 4-series would be a one-off, or downplayed in subsequent models, is set to be disappointed. The iX has a similarly visually aggressive front-end profile despite the lack of a requirement to cool a combustion engine. Instead the grille contains camera, radar and an array of other sensors. The official line is that the iX combines “the functionality of the BMW X5 with the sporting nature of the X6 and the visual impact of the X7.” We’ll leave you to decide whether that is a good thing.

How It Sizes Up

BMW says that overall length and width are similar to the dimensions of the X5—so around 194 inches and 79 inches respectively, and that height is close to the 66.8-inch X6. We do have a definitive wheelbase figure—118 inches—0.9 inch longer than the X5. Doors feature deployable handles that sit flush with the body when the car is locked or moving, like the Range Rover Velar and the new Mercedes S-Class. The doors themselves are frameless. At the rear is a wraparound tailgate reminiscent of the Audi Q7, with diffuser elements in the bumper where you’d normally find exhaust tailpipes. The reversing camera lens is hidden in the binnacle of the BMW roundel, an example of what the company describes as “shy tech”—features that stay hidden until called into use. Full LED lighting will be standard, with adaptive Laserlight units an option.

The iX lacks the i3’s core carbon-fiber structure, being built around the CLAR (natively rear-driven) version of BMW’s fifth-generation architecture and an aluminum spaceframe. Like the 7-series it will incorporate parts made from carbon-fiber-reinforced plastic, including the cowl panel and rear window frame. There is no official word on mass, but we aren’t expecting something so large and carrying so much battery power to be a lightweight; while it should be lighter than the 5843-pound Audi e-tron we are still expecting it to be substantially porkier than its combustion-engined sisters. BMW is proud of the iX’s 0.25 drag coefficient, and says the low aerodynamic profile—helped by active flaps—has added around 40 miles to the car’s range under the more optimistic European WLTP testing protocol.

The iX’s interior has a much more minimalist aesthetic than we have seen in other BMWs, having been designed to maximise space and with controls pared back and a central 14.9-inch curved touchscreen display the primary user interface; this joins seamlessly to the 12.3-inch digital instrument screen. Between the seats there is still a turn-and-click iDrive controller and also a rocker switch that takes the place of a conventional transmission shifter. The iX will also offer a head-up display to project data onto the inside of the screen plus the option of a 1615 Watt ‘4D’ Bowers & Wilkins audio system incorporating bass-enhancing ‘shakers’ in the front seat, similar to the system Mercedes has just introduced in the new S-Class.

One thing missing from the official release is definitive word on the iX’s self-driving capabilities. In 2018 BMW’s then-chairman Harald Kruger promised that this car would be launched capable of what he termed Level 3.5 autonomy, meaning eyes-off operation. We hope to hear more about that ahead of sales beginning in the U.S. in early 2022.

There is no word on pricing yet, either, or whether BMW will also offer the iX in less powerful forms, or a cheaper version with a less potent battery as it is planning to do in Europe. Based on the potency of its preliminary numbers, we are expecting the full-strength version to carry a premium over the Mercedes EQC and Audi e-tron. 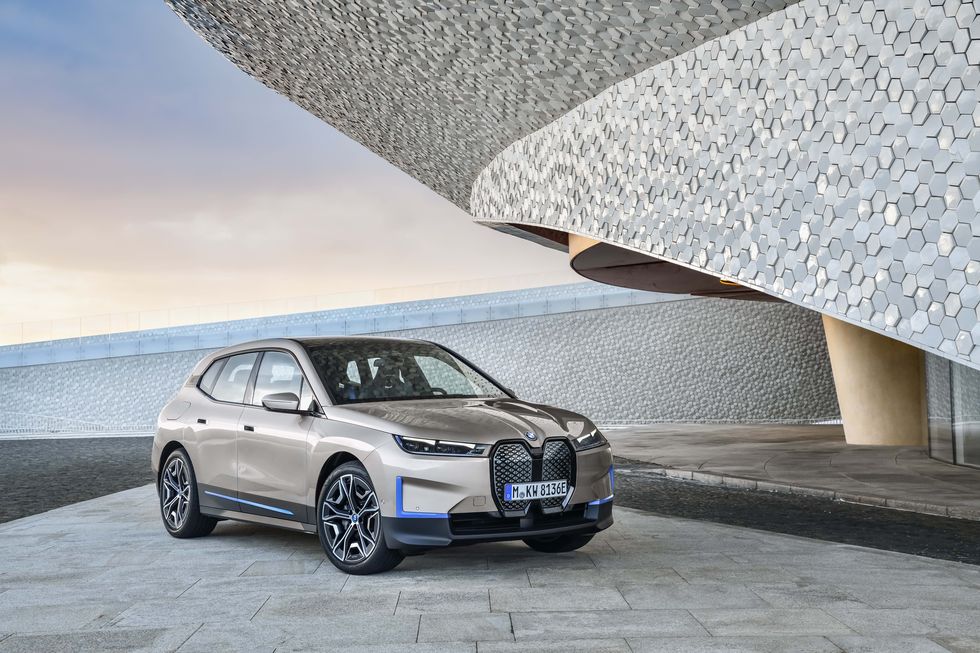