Despite being part of the same company, Audi and Porsche continue to compete like old rivals. Both companies share an electric-car platform dubbed J1, and both are building similar battery-powered models atop it. Porsche’s Taycan launched about a year ago, and now Audi is letting us sample its gorgeous e-tron GT. We spent a day behind the wheel of a camouflaged RS e-tron GT—that’s the spicy one—the 590-hp version with the 670-hp Taycan Turbo in the crosshairs.

Under overboost conditions and when using the launch-control function, the estimated 590 horsepower temporarily rises to around 637 horsepower. We expect the sprint to 60 mph will take about 3.0 seconds, and top speed is governed at 155 mph. The basic e-tron GT will make 510 horsepower, or 12 horses fewer than a Taycan 4S.

On the tight, sometimes slippery but rather empty roads on the Greek island of Rhodes, the RS e-tron GT was able to show off its handling. After the drive, Audi set up a drag race where speeds reached an indicated 135 mph. The shift from first to second gear, by the way, was clearly noticeable under full acceleration, but it is barely noticeable on the road, where the upshift happens around 45 mph in Sport mode. In range-optimized modes, the RS e-tron takes off in second gear.

The suspension tune is rather soft, but the adaptive dampers stiffen in an instant. Lightning-quick step-off acceleration and the variable torque distribution give the e-tron GT nearly all of the agility and acceleration of the Taycan Turbo S. This is despite a claimed 4600-pound curb weight, which we think will be closer to 5000 when United States-spec cars are finalized. Audi engineers left in a bit of body roll, giving the driver a good sense of reaching the limits of adhesion, while the steering is pleasantly light. The RS e-tron GT is a fantastic performer, but it has a distinct character. It feels a bit less darty than the Taycan, and it is a bit more comfortable and relaxing on long drives.

Inside, there is a wide, horizontal, and angular dash that takes the futuristic design of e-tron SUV to the next level. Audi concealed the instrument panel, but we took a peek and liked what we saw. As in the Taycan, driver and passengers sit low. But it’s comfortable, and the room in the rear seat is ample. The e-tron GT has three seats in back. The middle seat is raised and narrow. The large steering wheel is a key differentiator from Taycan, the mirrors are conventional instead of camera-based units on European versions of the e-tron SUV, and Audi has resisted the trend of retracting door handles.

A fixed panoramic roof will be standard. A carbon-fiber roof is optional and reduces weight by 18 pounds. Like the Taycan, the GT is a sedan. There’s a 12-cubic-foot trunk with a small opening and a frunk (front trunk) with 3 cubic feet of storage. Audi is considering adding a hatchback version, possibly because Porsche will be adding a hatchback Taycan Cross Turismo next year. The structure is largely made from steel with some aluminum components, and almost all body panels with the exception of the roof are made from aluminum.

The body has a beautiful shape, with a fastback look and the right amount of aggressiveness from its creases and bulging fenders. It’s hard to imagine that Audi could have pulled off the design if they had to package a powerful gasoline engine under the hood. RS versions don’t get too much external differentiation. Spotters will have to check the nose for a honeycomb pattern in the grille and, of course, the RS badges.

Audi claims a 249-mile range in the Euro cycle for the non-RS, but it isn’t ready to release the details on the RS version. We’ll assume it is less than the base model. Driven hard, we watched the range drop precipitously, so if you head out to hammer on the RS e-tron GT, set aside some time and a plan to recharge.

Final pricing is not yet available, but we’re estimating a starting price the equivalent of $163,000, which makes the Audi RS e-tron GT about $12,000 less than the Taycan Turbo. We expect a similar difference when the Audi arrives in the U.S. next year, an important differentiator that works in the Audi’s favor. 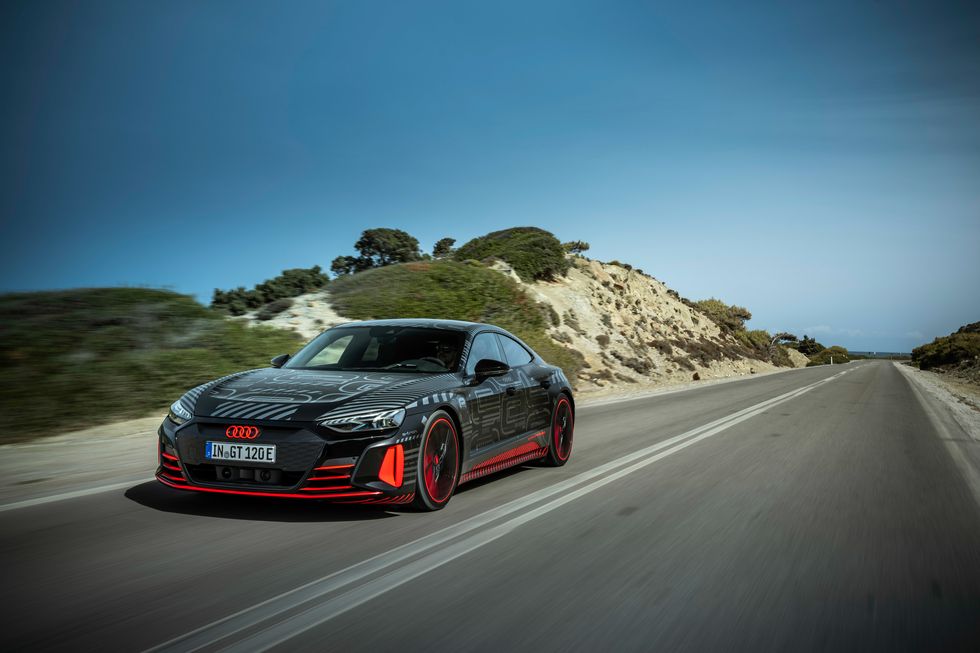