The noble, dirty sport of rally racing has been responsible for many roadgoing performance heroes. Cars such as the Audi Quattro, Lancia Delta Integrale, Ford Sierra RS and Escort RS, Toyota Celica GT4, and the Subaru WRX were all born of manufacturers having to build streetgoing version of their racers. But when the homologation requirement for a winning World Rally Championship car to be based on a purchasable vehicle ended in 1997, the link was broken.

Until now, that is. The Toyota Yaris GR isn’t a roadgoing WRC car, but it does get impressively close, having been created by Gazoo Racing, Toyota’s in-house motorsports arm. It is the first product born of Toyota boss Akio Toyoda’s insistence that his company’s return to topflight rallying and that motorsports should have direct relevance to the company’s products.

We drove the Yaris GR in England, on damp and twisty roads almost perfectly suited to demonstrating the talents of this all-wheel-drive hot hatch. Sadly, there are no plans to bring the Yaris GR to the United States. Customers didn’t exactly line up to buy the Mazda-based Yaris before it was quietly dropped from the lineup. But we will see a version of this all-wheel-drive powertrain in a U.S.-bound performance model better suited to American tastes.

There have been motorsport-inspired versions of the Yaris before—we drove the supercharged GRMN in 2018—but the GR is radically different. Beyond its name, the two-door GR has very little in common with the European Yaris or the former American Yaris. Although its wheelbase is the same, it sits on a Franken-platform version of Toyota architecture. The Yaris GR combines the regular Yaris’s front-end structure with a rear section made using the GA-C architecture that underpins Corolla and C-HR. The rear suspension has upper and lower control arms and a radically enhanced track width, plus there’s an underfloor tunnel to package the all-wheel-drive system’s driveshaft. The only parts shared between GR and Euro Yaris are the headlights, tail lights, side mirrors, and the antenna on the roof.

The Yaris GRMN from a few years ago used a supercharged 1.8-liter four-cylinder engine tuned by Lotus. Despite losing a cylinder and some displacement, the GR’s engine boasts more power than the GRMN’s four. The turbocharged 1.6-liter three-cylinder is closely related to the one used in the junior World Rally Championship 2, and its 257 horsepower makes it the most powerful production three-pot in the world. No attempt has been made to hide its turbocharged character. It is hesitant and laggy at low revs with an elasticity to its power delivery as turbo boost builds. It sounds great—like many three-bangers, it almost has the aural character of a V-6 when worked hard—and it pulls keenly to a 7200-rpm redline.

The best rally cars have torque-juggling active center differentials and sequential gearboxes. Toyota has kept things simpler in the GR with a six-speed manual transmission, and it has one of the nicest shift actions we can remember from a transverse-engine layout. Torque diverts rearward through an electronically controlled clutch pack at the back of the transmission. This is similar in principle to the Haldex system most associated with Volkswagen Group products, but Toyota’s boasts a lighter clutch and permanent engagement. The GR is all-wheel drive all the time.

Toyota overdrives the rear axle, which allows the front-rear torque split to be biased by either slipping or engaging the rear clutch. There are three modes: Normal sends 60 percent of torque forward, Sport changes the balance and dispatches 70 percent rearward, and Track splits the torque equally. Open differentials are standard at each end, but an optional Circuit Pack swaps these for Torsen limited-slip differentials and also brings forged 18-inch alloy wheels with Michelin Pilot Sport 4S summer rubber and a stiffer suspension.

Even equipped with the Circuit Pack, the GR doesn’t have an excess of dynamic aggression. The steering is heavier than Toyota’s normal generous level of assistance, but the GR doesn’t have the darty responses that chassis engineers often use to indicate enthusiasm. The rack delivers proportional responses and makes accuracy easy, allowing the clever all-wheel-drive system to shine.

In Normal mode, the GR feels like an extra-agile hot hatch, being powered to the edge of front-end breakaway and then brought back onto a chosen line with a slightly eased throttle while still maintaining traction. Toyota admits the rear-biased Sport mode has been designed for loose surfaces as much as hard ones; it gives a definite back-end bias without turning the GR unruly. Despite its name, the 50/50 split in Track mode actually feels best suited for use on slippery British asphalt, combining huge grip with a near-perfect balance between each axle.

A firm ride manages to avoid being abusive. The GR doesn’t have adaptive dampers or any switchable dynamic modes beyond its torque bias. At low speeds the Circuit Pack’s stiffened springs did prove adept at magnifying surface imperfections, but as both velocity and loads rise the chassis is more pliant, handling even big bumps and camber changes without complaint. The brake pedal lacks firmness but is properly placed to allow heel-and-toe downshifts. The GR also gets a defeatable rev-matching system of unerring accuracy.

Despite the substantive differences between it and the European Yaris, the GR feels similar from the driver’s seat. The instrumentation, switchgear, and dark plastics are all familiar. Equipment levels are good, including an 8.0-inch touchscreen, adaptive cruise control, auto-leveling LED headlights, and sports seats. The rear seat is much tighter than it would be in the regular Yaris, with access made awkward by limited headroom and the protruding driveshaft tunnel. And one strange omission: Unlike the regular Yaris, the GR doesn’t have a rear wiper. That’s something you’d expect from a rally car, and it’s nice to have when the inevitable English rain begins to fall.

In an ironic twist of fate—given its reason for being—the one thing the Yaris GR will miss is a competition-spec sibling. Toyota’s 2021 WRC entrant was set to be based on the Yaris GR, but COVID-19 caused testing to be halted. The team will be using the older four-door Yaris WRC for another season before the arrival of hybrid regulations in 2022 requires an all-new car. Still, it’s good to know that Toyota cares about cars such as this one. Now let’s hope the eventual U.S.-bound GR keeps the spirit that makes this Yaris feel so special. 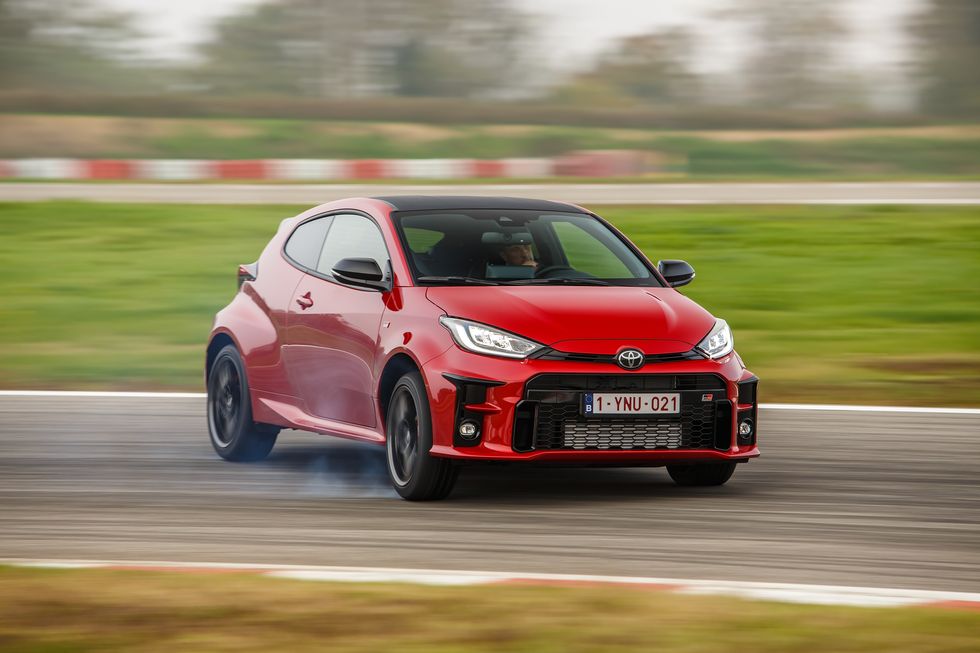