The 2021 Porsche 911 GT3 is getting ready to race back into showrooms sporting a wild-looking rear wing and racecar hardware. The former is a distinct design feature that’s mounted at the top instead of the bottom, which Porsche says actually improves aerodynamics. The latter includes a multilink front suspension—the first on a 911 road car—that’s inspired by the company’s racing division. While the new GT3 will make its debut for the 992-generation 911, it’ll feature an enhanced version of the fabulous naturally aspirated 4.0-liter flat-six that powered the outgoing GT3. We know it’ll hook up to either a manual or automatic transmission, but we can only say that the engine will generate more than 500 horsepower. In addition to some exclusive styling cues, the 2021 911 GT3 boasts special interior pieces that will separate it from other variants.

For 2021, the 911 GT3 is back! While Porsche is still waiting to divulge full details, we’ve learned quite a bit from the reveal of the prototype version. That means an even racier GT3 RS is surely in the cards, too.

We don’t know how much the new 911 GT3 will cost, but we expect its starting price to be higher than the last one that was on the market. We’re also told that Porsche will again offer a Touring package that we expect will chop off the rear wing for a subtler appearance. This time the GT3 Touring will be available with both transmissions instead of just the manual gearbox.

At the tail end of the 911 GT3 will be a familiar naturally aspirated 4.0-liter flat-six that should make more than 500 horsepower. We’re told the engine is an enhanced version of the one that powered the last 911 Speedster we tested, which spun to 9000 rpm and sung hypnotic sounds to the tune of 502 horsepower. The new GT3 will be offered with either a seven-speed dual-clutch automatic (a.k.a. PDK) or a six-speed manual transmission. Note that it won’t have the seven-speed stick-shift that’s available on the regular 911. Porsche also says the six-speed’s rev-match system can be completely deactivated. The most notable performance upgrade on the upcoming GT3 is that it’ll feature a multilink front suspension setup, which is inspired by the racecar version and marks the first time it’s been fitted to a production 911.

Neither the EPA nor Porsche have said how fuel efficient the 2021 911 GT3 will be in the city or on the highway. Once those estimates are released and we have the opportunity to run one on our 75-mph highway fuel-economy route, which is part of our extensive testing regimen, we can evaluate its real-world mpg.

The GT3’s interior will be very similar to the rest of the 911 lineup, with a clean design and simple layout that pays homage to past iterations of Porsche’s quintessential sports car. However, there will be a handful of unique characteristics throughout the cabin. The GT3’s gauge cluster still features a prominent analog tachometer flanked by digital displays, but it gets a specific GT mode that puts all important information directly on the displays surrounding the central tach. Models with the automatic transmission also replace the stubby center-console shifter found on the regular 911s with a traditional handle that mimics the look of the manual version. The last GT3 did without rear jump seats to save weight, so we expect that omission to apply to the upcoming version as well. We’d also wager that Porsche will offer more than one style of front seats, with an optional set of lightweight buckets designed to reduce mass and increase support.

The infotainment system found on the regular 911 should also find its way into the GT3 version. That means a 10.9-inch touchscreen will inhabit the center of the dashboard and be supplemented by some physical controls on the steering wheel as well as on the center console. We expect connectivity features to include wireless Apple CarPlay, a Wi-Fi hotspot, and a selection of premium stereos.

The 2021 911 GT3 hasn’t been crash tested by the National Highway Traffic Safety Administration (NHTSA) or the Insurance Institute for Highway Safety (IIHS). We also don’t know what, if any, driver-assistance technology will be on the roster. 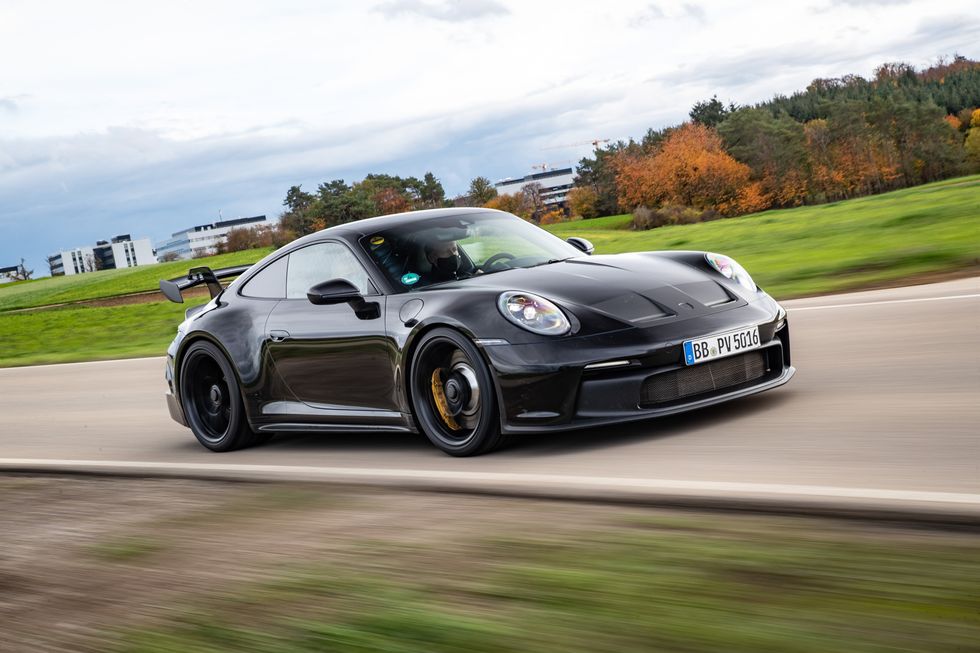