Porsche aficionados seem to love everything that comes out of Stuttgart-Zuffenhausen, but that doesn’t mean the company won’t listen. And when we spent a few hours with Andreas Preuninger, who heads the development of the new 2021 Porsche 911 GT3, we got the feeling that he keenly listens to the customers. In fact, he is their best ally against those who would prefer to neuter the quintessential 911, to take it into the mainstream and make it more digestible.

You can’t exactly tell what the new GT3 will look like thanks to the slight camouflage up front and in the rear on this prototype. But our sources tell us it looks cleaner than ever, with a lower front air intake that resembles a jet engine. The rear wing is mounted at the top; it looks unusual, and it’s said to provide an aerodynamic advantage over a conventionally mounted wing.

Open the door, and the new instrument cluster addresses a major criticism of the 992: While the two outer gauges are hidden behind the steering rim in the regular 992, the GT3 features a specific GT mode that places all important information directly to the left and right of the central analog tachometer.

Happy news come from the powertrain department. The naturally aspirated 4.0-liter flat six is a notch up from the previous 911 GT3 and even from its superior evolution, the 991 Speedster’s engine with its single throttle valves. The sheer responsiveness and agility of the engine is a marvel, not to mention its expected 500-plus-horsepower rating and 9000 rpm redline.

The engine is mated to either a precise six-speed manual—which we like better than the standard 992’s seven-speed manual gearbox—or a seven-speed PDK dual-clutch automatic transmission. Preuninger’s team has listened to customers very closely, and as a result, the manual’s rev-match system can be turned off entirely.

Moreover, the unfortunate gear selector of the regular 992’s PDK box, which resembles an electric shaver, has been replaced by a grippy shifter that features a separate gate in order to select gears the way god intended: Push to downshift, pull to upshift, like in a race car. Preuninger likes to use the console-mounted shifter in spite of the nicely executed, wheel-mounted paddles. So do we.

The chassis features a major change in the form of a race-inspired multilink front suspension setup—a 911 first. There are no electronically controlled engine mounts on the new model. They were deemed unnecessary, just like the extra weight they would have added.

Meanwhile, Preuninger has further derivatives on his mind. There will be another iteration of the GT3 Touring, which does such a marvelous job of giving just the slightest hint of its awesome performance. This time around, both the regular GT3 and the Touring will be available with both transmissions. And we can safely assume there will eventually be a GT3 RS again. The customers will love them all. 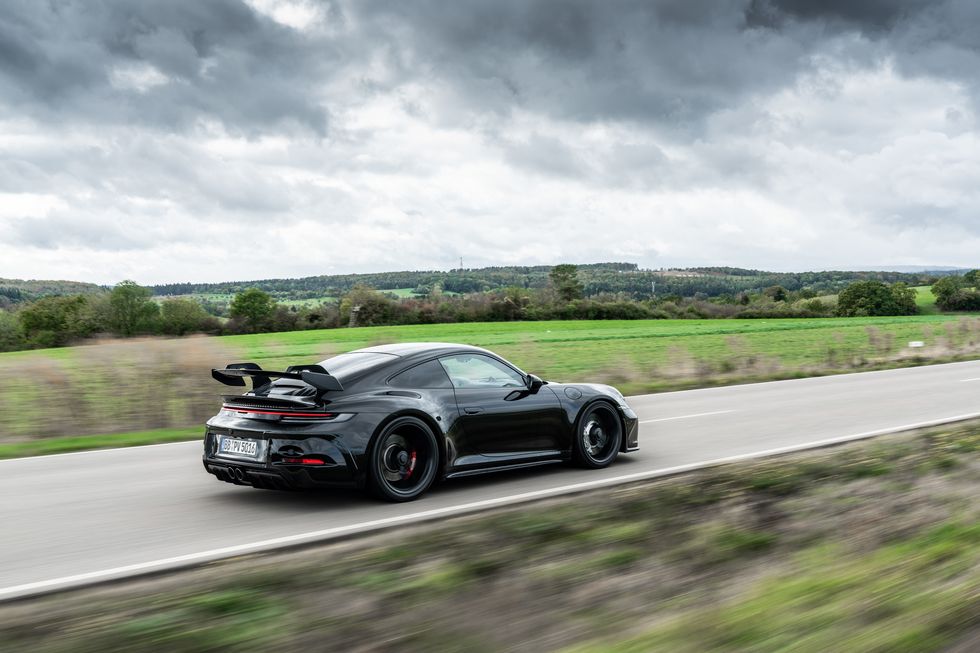