With a price that’s affordable for almost everyone shopping for a new car, and an unrivaled number of active-safety features, the 2021 Nissan Versa is a competent and appealing subcompact sedan. It also boasts comfortable seats and a tranquil ride that help make daily commutes a pleasant experience. While the little Nissan isn’t exactly entertaining to drive or zippy, it is very fuel efficient—especially on the highway. The base model costs less than $16,000 with the manual transmission, but you’ll have to step up to one of the two higher trims to get popular features such as Apple CarPlay and Android Auto as well as desirable options such as adaptive cruise control and heated front seats. Still, the 2021 Versa has the attractiveness and refinement to deserve consideration alongside classmates such as the Hyundai Accent and Toyota Yaris.

After completely redesigning the Versa for 2020, Nissan ushers its subcompact sedan into the new model year with only one change: its base price does go up by $100.

The top-of-the-line Versa SR is the one to get. Sure, it’s the most expensive version, but we think it’s worth it for all the enticing standard equipment it provides. Both the SR and the slightly less expensive SV come with an automatic transmission, and their infotainment systems feature Apple CarPlay and Android Auto compatibility. However, only the SR gets 17-inch rims, a leather-wrapped steering wheel, LED headlights, passive entry, and remote start. We’d also add the Convenience package for its adaptive cruise control and heated front seats.

Every Versa is motivated by a 122-hp four-cylinder engine that powers the front wheels. A five-speed manual is the default transmission on base models, but a continuously variable automatic transmission (CVT) can be had on the S, too. The latter comes standard on the higher SV and SR trim levels. While the Versa feels slow when pulling away from stoplights and during highway-passing situations, its CVT helps prevent coarse noises by mimicking actual gearchanges. The Versa we drove had a smooth ride that isolated road imperfections. It also was much better to drive than the version it replaces, providing accurate steering feel and consistent brake-pedal feedback. However, if sportier driving dynamics are important, we’d suggest taking a look at the Yaris, which impressed us during a comparison test with its better powertrain and more playful behavior.

The 2021 Versa boasts an EPA estimated rating of 32 mpg in the city and 40 mpg on the highway when equipped with the CVT. Those numbers are identical to the government ratings of the Yaris. The entry-level Versa with the manual has significantly worse figures, with an estimated 27 mpg city and 35 highway. We tested an automatic-equipped Versa on our 75-mph highway fuel-economy route, which is part of our extensive testing regimen, where it earned 40 mpg. In the same test, the Yaris fell 5 mpg short of its highway estimate, earning 35 mpg.

The Versa’s interior no longer looks and feels like a children’s play area. It uses nice materials throughout and has soft-touch surfaces on the doors and dashboard. While Nissan doesn’t offer power-adjustable seats and leather upholstery here, the fanciest model can be had with heated front seats as well as a leather-wrapped steering wheel and shift knob. The mid-level SV model unlocks some desirable standard features, such as a driver’s-seat-mounted armrest and a digital screen in the gauge cluster, while the top-tier Versa SR brings automatic climate control, passive hands-free entry, remote start, and more. The back seat can comfortably fit two adults but has less legroom than the older Versa. The sedan has useful cubbies on its center console, and we managed to fit six carry-on suitcases in its trunk; 17 total with the back seat folded.

The Versa features a standard 7.0-inch touchscreen infotainment system with useful buttons and knobs. However, only the SV and SR trim levels have Apple CarPlay and Android Auto integration. During our evaluation period, we found that the CarPlay interface responded better to our inputs than the car’s normal menus did. Every Versa has three USB ports and voice-command capability, but anyone who wants the ability to listen to SiriusXM satellite radio will have to look higher than the base model.

The 2021 Versa hasn’t been fully crash tested by the National Highway Traffic Safety Administration (NHTSA), and the last version that was evaluated by the Insurance Institute for Highway Safety (IIHS) was not named a Top Safety Pick. The Nissan sedan comes with a lot of standard driver-assistance technology, including automatic high-beams and lane-departure warning. While rivals such as the Accent and the Kia Rio sedan offer automated emergency braking, the Nissan’s roster of safety equipment outshines them. Key safety features include:

While Nissan’s limited and powertrain warranties fall short of the lengthy coverage that Hyundai and Kia provide, its protection plans are comparable with most other rivals. The Versa also doesn’t come with complimentary maintenance like the Yaris does. 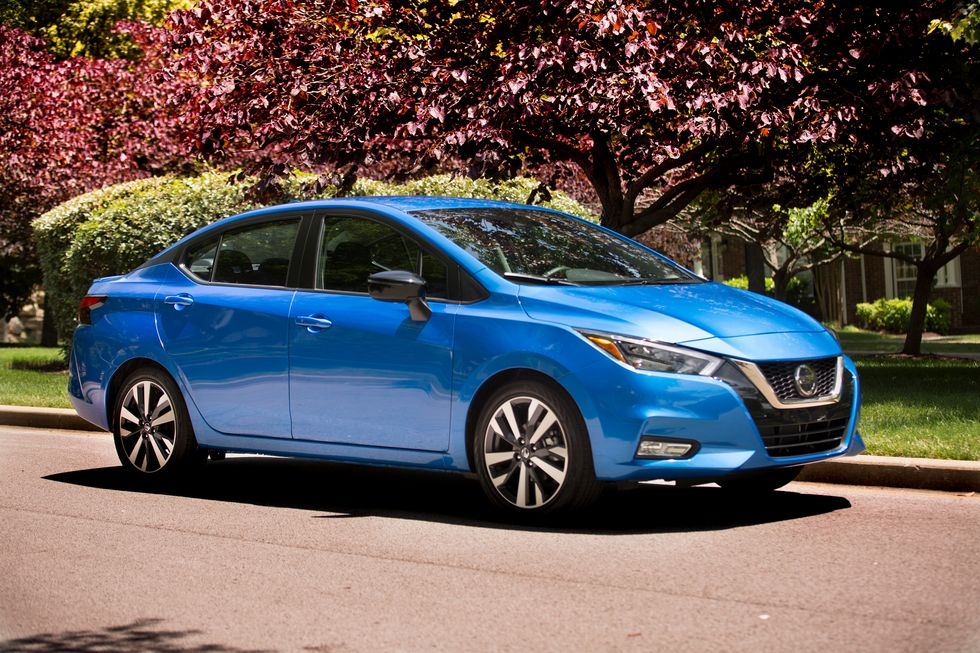