First, a recap. Maybach (pronounced MY-bahk) used to be its own thing. Founded in 1909 by Wilhelm Maybach as an engine builder for Zeppelins, by 1921 the company was producing a luxury car that essentially superseded Mercedes-Benz as the poshest of all German mechanical contrivances. The company stopped making cars and switched to building engines for Panzer and Tiger tanks during World War II. After the war, the company died. By 1960, Daimler-Benz acquired the leftovers and the name, and in 2002 Maybach was revived as its own brand. That super-luxe experiment ended in 2012. Mercedes-Maybach now exists as a super-luxury sub-brand within Mercedes-Benz itself. Got it? Good.

With that history lesson in mind, this is the first time the Maybach name has been placed on an SUV—in this case, Mercedes’s large GLS-class model assembled in Tuscaloosa County, Alabama. At present, Alabama is not in Germany. The Maybach GLS may just be the most prestigious consumer product currently coming from that state. Roll Tide.

Mechanically, the Mercedes-Maybach GLS600 closely parallels the Mercedes-AMG GLS63. The powerplant is the same twin-turbocharged 4.0-liter V-8 with a few modifications that relax output from the AMG-spec 603 horsepower to a still-mighty 550 horses. It’s supplemented, as is the AMG version, with a 48-volt electric motor that can add as much as 21 horsepower and 184 pound-feet of torque, all of which flows through a nine-speed automatic transmission. The combination of internal-combustion engine and electric motor results in a silken ride of torque.

Unlike the Maybach S-class sedan that enjoys extensive changes to the dimensions and exterior design, the wheelbase of the GLS is unchanged from the Mercedes GLS-class and the sheetmetal carries over intact. The bits attached to the bodywork, like the grille, lights, and bumpers, are glamorously redone, but the most significant physical change to the GLS package is the elimination of the third row of seats. The second-row seats are pushed back for more legroom and so that an optional champagne cooler can be fitted between them. This is critical if the GLS is being used to ferry the kids to school every day and they need a mimosa in the morning to get the day going.

It also means that this is a four- or five-seat SUV. So, as a family hauler, its utility is limited. And since the rear seats don’t fold down, hauling new rain gutters home from Lowe’s is probably not happening.

Cooled, heated, ventilated, and adjustable in nearly as many ways as the human body, the rear seats are sculpted for royalty and covered in leather from cows who may have volunteered for the honor of sacrificing their hides. There’s a 7.0-inch tablet set between the thrones for controlling the seats, the Burmester audio, and four-zone Executive Climate Control systems (with separate rear air conditioner). The driver and shotgun passenger (maybe literally armed) are there to support the titans of industry lucky enough to sit in back—nothing else.

The GLS Maybach on hand for our event featured seatback-mounted screens to display a presentation on the GLS600 while we were chauffeured. Word is that United States-market versions won’t have those screens since widespread use of iPads and other tablets in this country make them redundant.

The powerplant is long on low-end grunt, almost freakishly quiet, the steering is precise but has a non-disclosure agreement with road surfaces, and the brakes could stop a crashing stock market. Road noise is muffled until it stops squirming, wind noise is slight and melodic, and the double-paned glass shushes anyone yelling about the injustices of capitalism.

Performance? When the masses arise against the oligarchs, the GLS600 will help them flee in a hurry. With a couple hundred pounds of additional curb weight over the GLS63 and slightly less power, we expect the zero-to-60-mph blitz to take 4.1 seconds. That’s hustling for a three-ton object.

This isn’t an SUV about sport or utility. It’s a vehicle for arriving, for making a big splash when it pulls up to an event, a club, or office building. It’s an announcement of intimidation, not something that’s built to dive into corners, take families on vacations, or even put at risk dirtying its standard 22-inch or optional 23-inch wheels.

With a price starting at $161,550, after adding a few options like the 23-inch wheels and the champagne cooler, a total chit nearing $200,000 wouldn’t be surprising. An AMG GLS63 has even more power, is optimized for better handling, and is still very, very luxurious. Plus, it has a third row of seats and the second row folds down. It also starts about $30,000 less. As a daily driver, it’s more practical and fun than the Maybach.

If you’re rich enough to afford a Maybach GLS, do you want to announce your prosperity so brashly? Doing so might be fine for that sliver of glitterati without the self-awareness to question their own need for social validation. Like an Aston Martin DBX, Bentley Bentayga, Rolls-Royce Cullinan, and Italianate villas in Miami Beach, the Maybach makes a strong statement. But while those competitors don’t require an explanation, the Maybach may require a history lesson. 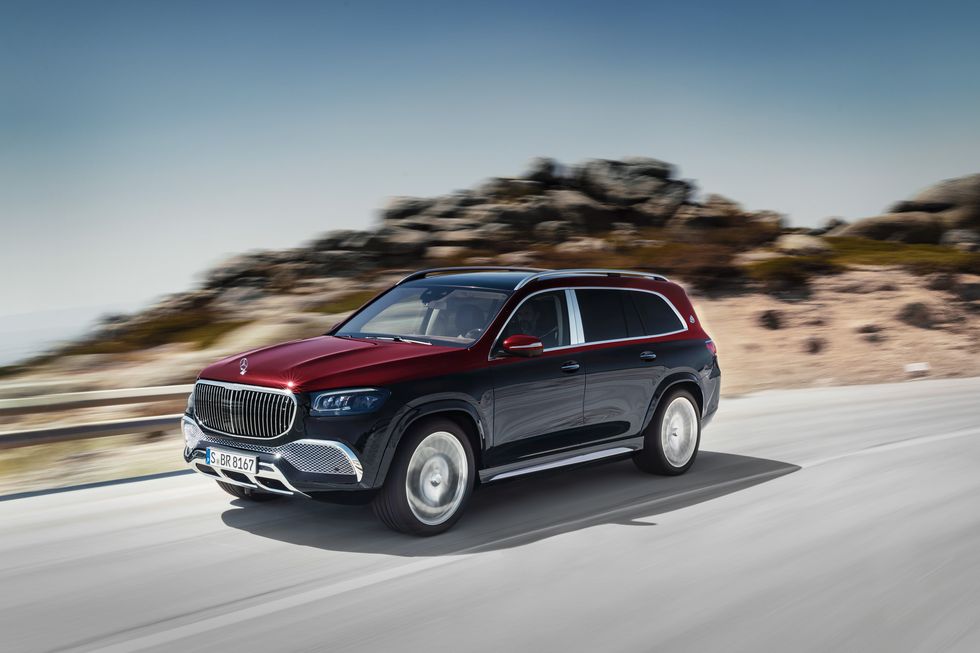