Hyundai says its N performance division is named for its Namyang proving ground in Korea and Germany’s Nürburgring, but the team involved probably would tell you it stands for No Sleep. Since the Veloster N was introduced in 2018, Hyundai engineers have been a busy bunch of bees developing six more products, including the new 2021 Elantra N Line, the more powerful Elantra N, which will go on sale late in 2021, and three SUVs that are coming soon.

The team’s insomnia-suffering speed merchants have also created Hyundai’s most powerful sedan ever, the 2021 Hyundai Sonata N Line. On sale now, it’s the first performance version of the brand’s popular mid-size sedan, and it’s looking to steal some practicality-minded enthusiasts from the Honda Accord 2.0T, Mazda 6, and Toyota Camry TRD. An afternoon spent driving it around Southern California, tells us it’s good enough to do just that.

To get there, engineers fortified the naturally aspirated 2.5-liter’s block, integrated its exhaust manifold into the cylinder head, lowered the compression ratio from 13.0:1 to 10.5:1, and bolted on a turbocharger to swell the intake with boost.

Hyundai also fits its new eight-speed dual-clutch automatic transmission, a gearbox that also pulls duty in the Veloster N, the Kia K5 GT, and in the upcoming Elantra N. Developed in-house, the transmission has a wet clutch pack, is properly responsive, shifts quickly and smoothly, but it doesn’t feel quite as immediate and snappy as it does in the Elantra N. The first four gears are tightly spaced and well matched to the engine’s torque curve, which is high and flat to 4000 rpm. There’s some serious midrange power here, and the big four-cylinder pulls well to 6250 rpm.

To reduce the time to 60 mph, Hyundai developed a launch-control program that makes drag racing this front-wheel-drive sedan easy. Those close ratios mean that second gear is done by about 50 mph. The N Line feels quicker than the Toyota Camry TRD, which hit 60 mph in 5.6 seconds in our testing. If it turns out to be quicker than the Accord 2.0T automatic’s 5.4-second time, it could be the quickest front-wheel-drive mid-size family sedan out there, but we won’t know until we get it to our test track.

Unfortunately, there’s a downside to all that power. It’s been a while since we’ve complained about torque steer, but heavy applications of throttle are felt through the Hyundai’s steering. It doesn’t turn the clock back 20 years, changing lanes on its own at the hit like a supercharged Pontiac Bonneville SSEi—not even close—but you’ll know you bought a front-wheel-drive car every time you put your foot down.

All that power churning through the front wheels is apparent on a tight mountain road. Despite those meaty Continental Premium Contact 6 summer tires sized 245/40R-19 (Pirelli P Zero all seasons are standard), the Hyundai has considerably more oomph than forward bite. Engage Sport mode, which disables the Sonata’s traction control, and it’ll spin its front tires out of tight second-gear corners, generating graceful whiffs of white tire smoke that travel up and over the windshield. It isn’t as fun as it sounds as the tires scream and squeal for life. Don’t listen to their pleas to slow down. Keep pressing, and the Continentals prove they have more grip to give.

The N engineers also retuned the chassis with significantly stiffer powertrain mounts, firmer dampers, and thicker anti-roll bars. The ride quality is sporty but comfortable, and there’s more than respectable lateral grip and steering feel. The Sonata N Line is capable of real pace in the hills, understeering only mildly when you overcook a tight corner, but it’s happiest in faster open sections, where it can stretch its legs and put its power down.

Larger 13.6-inch front and 12.8-inch rear brake rotors are also part of the deal. The pedal is reassuringly firm around town, and they feel good in the hills right up to the point when they overheat. The N Line weighs more than 3500 pounds, and it pulls like a freight train down the straights. The brakes get a workout. If you’re really on it, they’re cooked in just a few miles.

Tweaks to the sedan’s interior and exterior are mild but meaningful. Unlike TRD, which has dressed the Camry fast and furiously, Hyundai has taken a more conservative path while still following the sports-sedan dress code. There are a few small N Line badges scattered about and a new front fascia with three large air intakes. Its rump is redressed with four exhaust pipes, a black lower bumper, and, of course, a diffuser. The wheels have a complex 20-spoke design.

Inside we expected the three-spoke steering wheel from the Elantra N, but the Sonata sticks with the Sonata’s four-spoke unit. The push-button shifter also carries over from the regular Sonata. The N Line bits are limited to a nice set of sports seats wrapped in leather and suede. Standard features include a digital gauge cluster that displays simple round dials, a big 10.3-inch infotainment touchscreen, a Bose premium audio system, a panoramic sunroof, and Hyundai’s digital key, which can turn your phone into the car’s key.

At $34,195, it isn’t the cheapest option in the class, but the engine and chassis make it a strong value. The problem is that the same money gets you a rear-drive 255-hp Kia Stinger. We’d pick the Stinger over the Sonata N Line, and we don’t even have to lose much sleep on that choice. 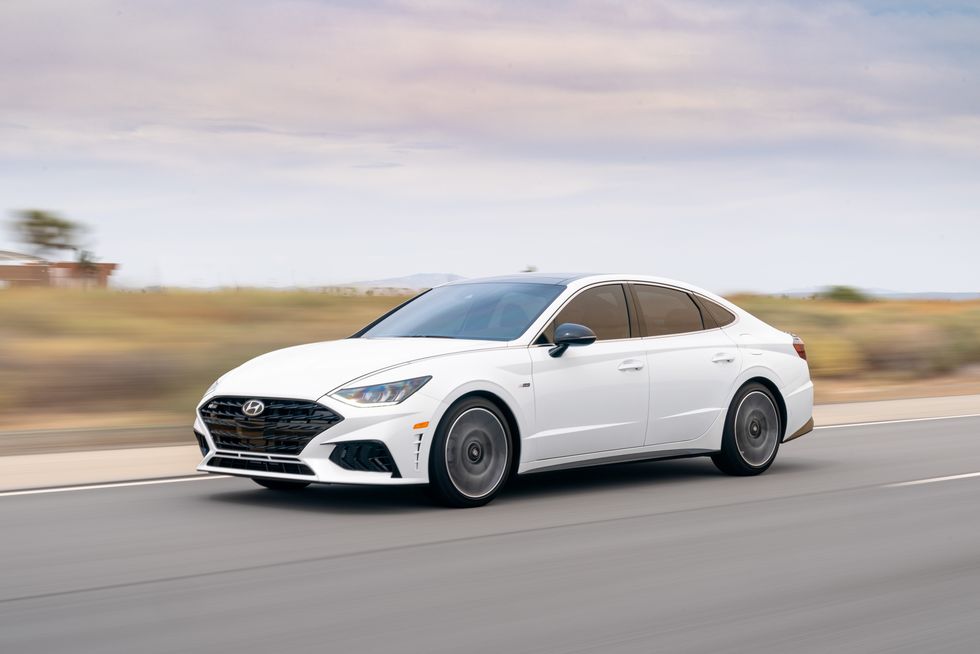