We suspect Hyundai’s product planning department went through a few cases of the good stuff when Honda announced that the Civic Si would not return for the 2021 model year. The car Hyundai had benchmarked when creating the new 2021 Elantra N Line would be a no show for the fight. Honda says the Si will eventually return, but the temporary absence of that sport-compact icon has opened a window of opportunity for Hyundai as it releases the first performance variant of its compact sedan.

Don’t confuse the Elantra N Line with the 276-hp Elantra N, which we’ve already driven in prototype form. That higher-performance model will be more akin to the Civic Type R than the Si when it goes on sale next fall. As with the Si, a turbocharged inline-four turns the N Line’s front wheels. Its small yet willing 1.6-liter mill develops 201 horsepower at 6000 rpm but will happily rev to its 6500-rpm redline and sounds good doing it. More important when scurrying around town, its 195 pound-feet of torque peaks at just 1500 rpm and holds strong to 4000 rpm.

Equipped with the standard six-speed manual transmission, the N Line pulls hard both off the line and out of tight second-gear corners, exhibiting just a hint of torque steer. The transmission’s first three gears are short and tightly spaced, which translates into great responsiveness in the city. However, second gear is all done around 55 mph, and the additional gear change to third will add a couple tenths to its zero-to-60-mph time. An equally close-ratioed seven-speed dual-clutch automatic is an $1100 option. The manual’s clutch and shifter are light but offer sufficient feedback, and the pedals are well placed for heel-and-toe action. Unfortunately, this 1.6-liter hangs onto revs momentarily when you let off the throttle, which can make smooth shifts difficult around town.

Built on the third generation of Hyundai’s K platform, the Elantra N Line weighs about 3000 pounds with either transmission. That’s about 200 pounds lighter than the similarly sized yet more powerful Volkswagen Jetta GLI, now its most natural rival. Hyundai’s design team has also taken significantly more risks than VW’s, what with the new Elantra’s dramatically sloping roofline, sharp-edged tail, and a handful of polarizing visual elements, most notably the three body creases that intersect on its front doors. However, less imagination was exercised for the N Line’s model-specific pieces, which are fairly standard sporty small-car stuff. Black mirrors and trim? Check. Blacked-out grille with a more aggressive mesh? Yup. Body-color side sill moldings? Got it. Two chrome exhaust tips, a small rear spoiler, and a new rear bumper stylized to look like a diffuser? Of course.

Similar design clichés dot the N Line’s interior. Red accents have been added to the Elantra’s clean analog gauge cluster, and its three-spoke steering wheel, seats, and door panels wear plenty of red stitching. At least the red stripe on the shifter is interesting, and the sport seats look and feel right with their prominent bolsters and embossed N logos. Hyundai didn’t skimp on technology, either: A wireless phone charging pad and wireless Android Auto and Apple CarPlay are all standard.

Projector headlights, LED taillights, and a sunroof are also standard, as are dark-finished 18-inch wheels wrapped in 235/40R-18 tires, either Hankook Ventus S1 RX all-season or Goodyear Eagle F1 summer rubber. The N Line shares the regular Elantra’s strut front suspension but gains an independent rear end, larger front brake rotors, stiffened powertrain mounts, and revised chassis tuning. Along with firmer dampers, the anti-roll bars are stiffer and spring rates have been dialed up a whopping 26 percent in front and 71 percent in the rear versus the standard Elantra.

Given the revisions, we were prepared for a bridle ride. But the N Line’s comportment feels pleasantly compliant and exhibits good body control. Its steering ratio is spot on, and there’s plenty of communication with the front tires. The N Line retains its composure when pushed hard, and its front end has good bite when turning into corners. While it doesn’t have the power or intensity of the harder-core N model, it is good fun and should be able to hang with your buddy’s Civic Si on curvy roads.

At $25,095 to start, the Elantra N Line is an undeniable value, undercutting the Jetta GLI by more than $2000. But the VW, which recently made our 10Best list for the second year in a row, may still have a performance edge over this Hyundai. We won’t know for sure until we get an N Line to the test track, but Hyundai is clearly intent on making the new Elantra a serious player in the sport-compact segment. 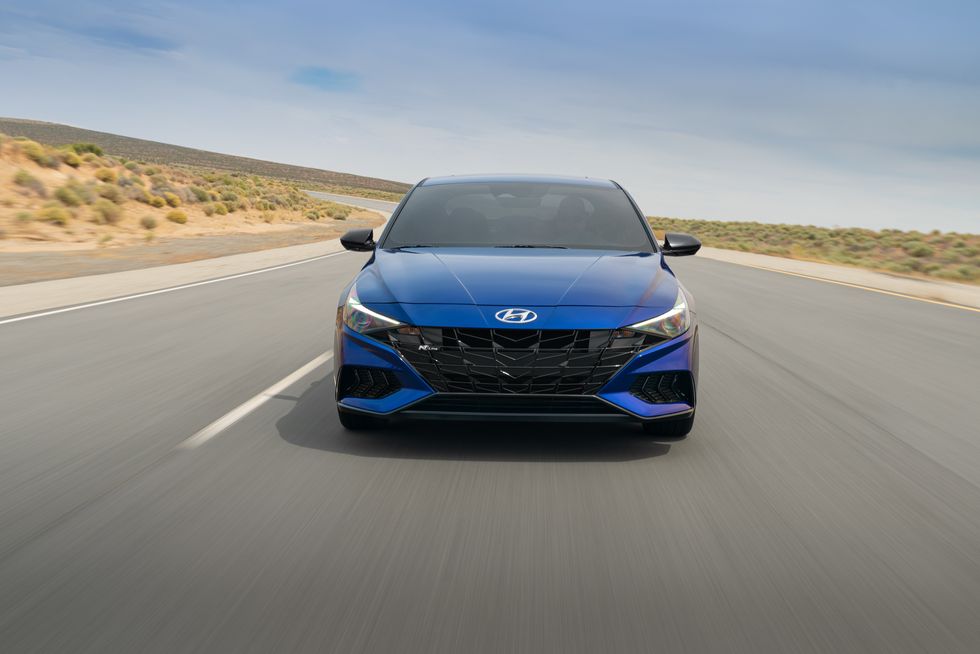