Few automotive happenings are more business-critical than the launch of a redesigned Ford F-150. The Mustang Mach-E and Bronco may draw the eyes of enthusiasts, and are key parts of Ford’s future, but few vehicles have more significance to the U.S. auto industry than pickup trucks, and Ford’s F-Series is the reigning sales champion in this incredibly popular and profitable segment.

While this isn’t a full-blown, head-to-toe redesign, the 2021 F-150 received a comprehensive powertrain overhaul, a new interior and some new “hey, neat” type features that just might sway a buyer who otherwise believes just about any truck will do, so long as the price and capabilities check all the right boxes. You can get more in-depth details on the Ford F-150 in our launch day coverage, but we’ll hit the highlights here for your convenience.

While the 2021 F-150 was restyled, its looks aren’t a significant departure from the previous model’s. Changes are more noticeable inside, where a new steering wheel and a cleaner center stack highlight a host of other small tweaks. The obvious upgrade here is Ford’s fourth-generation Sync infotainment system, which received some serious hardware upgrades to improve its performance over Sync 3. Chief among these is a mammoth available 12-inch touchscreen, though our time with it prevented an in-depth review (well, apart from reporting that it’s a long reach from the driver seat to the screen’s right side)

Ford also threw in some cool new exterior treats, such as a redesigned tailgate that now boasts an available flat work surface with built-in clamp pockets and bottle openers. There’s also available outside zone lighting (allowing you to illuminate only the spaces in which you’re working – or playing) along with an in-bed power system that blows away anything else you’ve seen from a factory pickup. 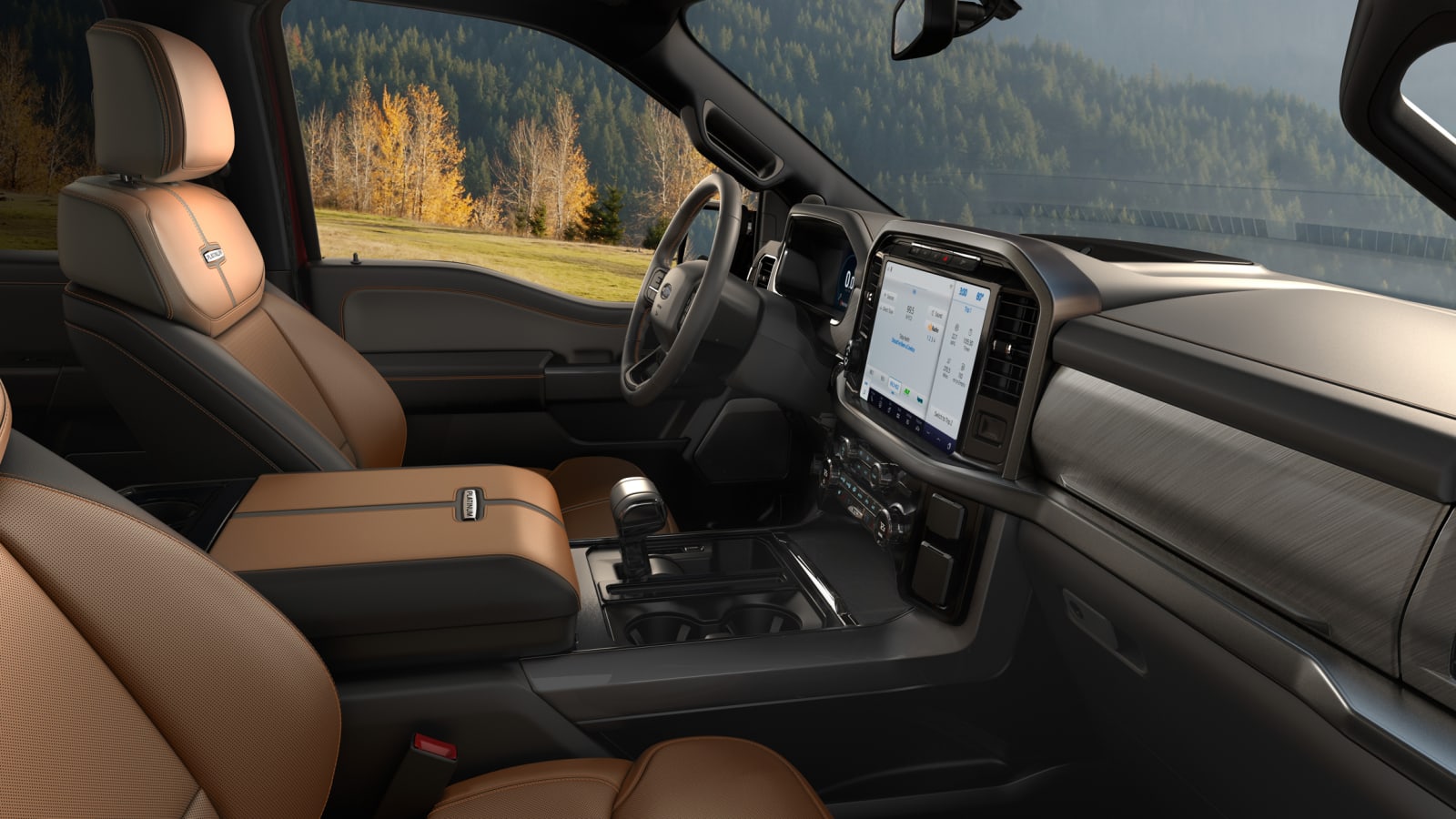 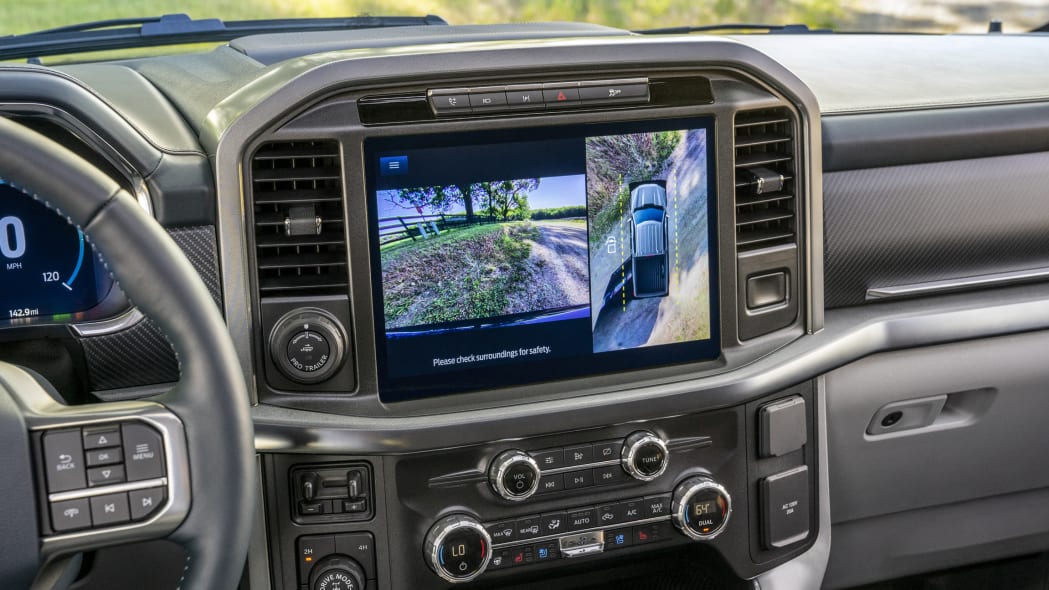 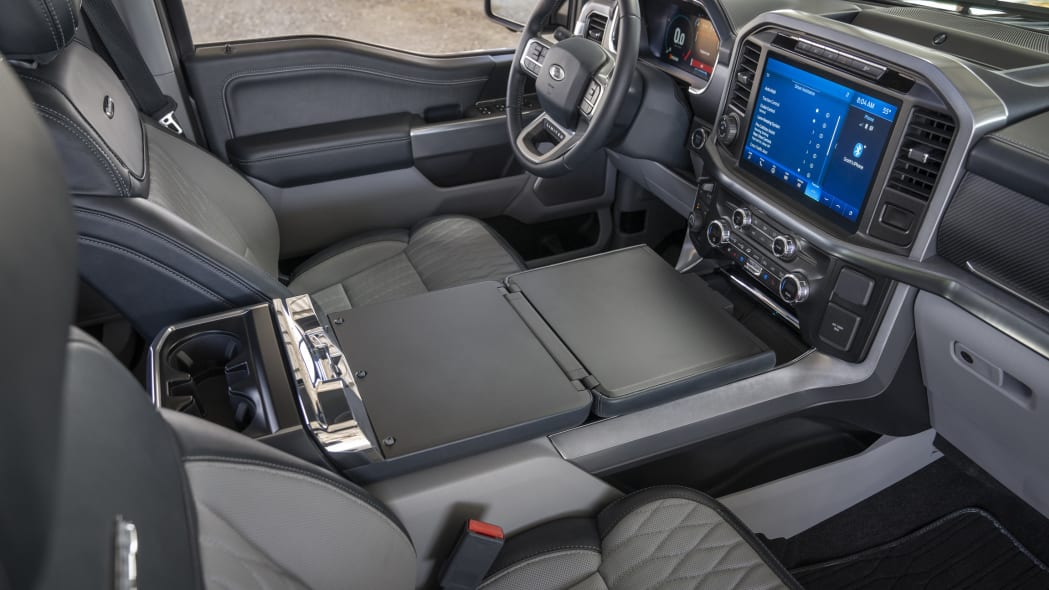 The 2021 Ford F-150 is offered with six powertrains, but not the same six that were available on the 2020 model. Headlining these changes is the new F-150’s party piece: the PowerBoost hybrid. Based on the 3.5-liter EcoBoost V6 and a new modular hybrid 10-speed automatic transmission, this is the range-topping powertrain for the 2021 model, producing 430 horsepower and 570 pound-feet of torque.

Stepping down from that, the 5.0L “Coyote” V8 and 3.5L EcoBoost return, each producing 400 hp. The V8 produces 410 lb-ft of torque, while the EcoBoost V6 makes 500 lb-ft. This turbocharged V6 previously came in 375- and 450-horsepower variants, with the latter reserved for the Raptor and high-end Limited models. The existence of a new Raptor has been confirmed, but given the imminent arrival of the Hellcat-powered Ram TRX, we suspect Ford will take a new approach to its range-topping performance truck.

Below this, the 3.0-liter Power Stroke diesel returns, making 250 hp and 440 lb-ft. The 2.7-liter turbocharged EcoBoost V6 is the next step down, and it produces the same 325 hp and 400 lb-ft it did in the outgoing truck. The naturally aspirated 3.3-liter V6 also returns as the base engine with 290 hp and 265 lb-ft — yet another carry-over figure. 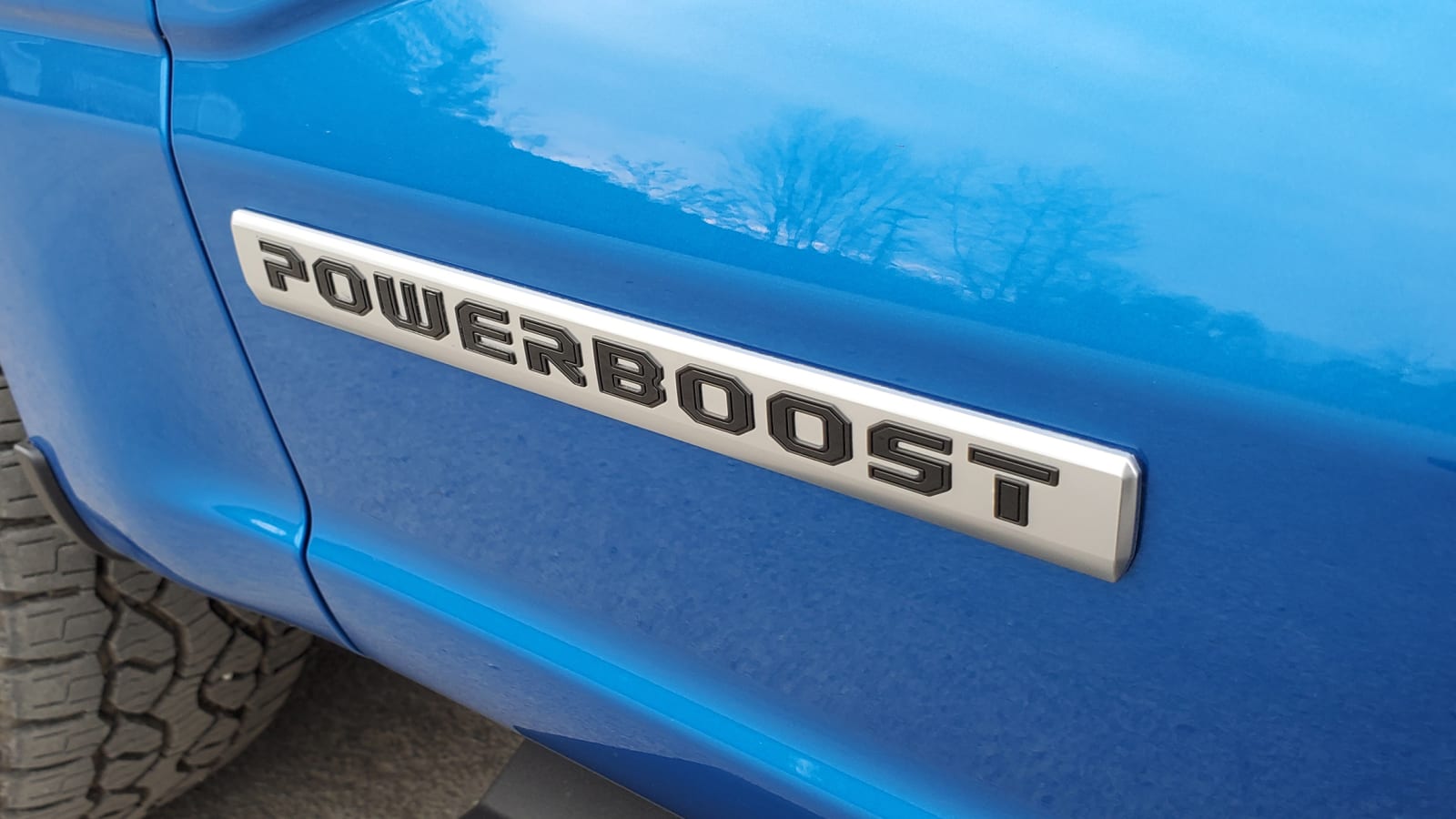 Specifically, we’ll note that the PowerBoost is rated to haul as much as 2,120 pounds in the bed and tow as much as 12,700 pounds. Both of those figures best the Power Stroke diesel’s in equivalent SuperCrew configurations. And if you’re wondering about the hybrid’s weight (a key factor in towing capacity and payload), it’s only about 250 pounds more than the equivalent diesel and 350 more than a 3.5 EcoBoost. Not bad.

While we’re focusing on the F-150’s capabilities, we need to touch on one of the F-150’s more exciting new features. Pro Power On Board takes powering on-site accessories to the next level, converting the F-150’s bed into a mobile power station with a built-in generator.

This system is not unique to the hybrid, but its utility is maximized with the electrified powertrain. While gasoline engine models equipped with it max out at just 2.0 kilowatts, the hybrid increases to 2.4kW with an optional upgrade to 7.2 kW. If you choose that upgrade, you get 30-amp, 240-volt service in the bed via a NEMA L14-30R hookup along with four 20-amp, 120V outlets. The 2.0 and 2.4 kW variants merely get 20-amp 120V outlets, but that’s still more than the competition offers.

Besides the giant available touchscreen, interior updates include optional “Max Recline” front seats on the Platinum, King Ranch and Limited models. These seats fold almost completely flat, allowing for co-driver power naps or even rest-stop sleep breaks. A new table option, dubbed “Interior Work Surface,” deploys over the center console. The gear selector stows away, folding forward into a recess, allowing the table to be folded down and creating a workspace that can accommodate a binder or notepad, or even a small laptop.

There’s also a full-width rear under-seat storage solution that both locks and folds flat to make way for larger cargo. The door-to-door footprint makes it ideal for storing longer items, Ford says, such as outdoor equipment or even some firearms.

Our time with the 2021 F-150 was brief, so we weren’t able to sample all of these new gadgets. We focused on getting as much time behind the wheel of the various powertrain offerings as we possibly could, starting with that monster new PowerBoost hybrid. 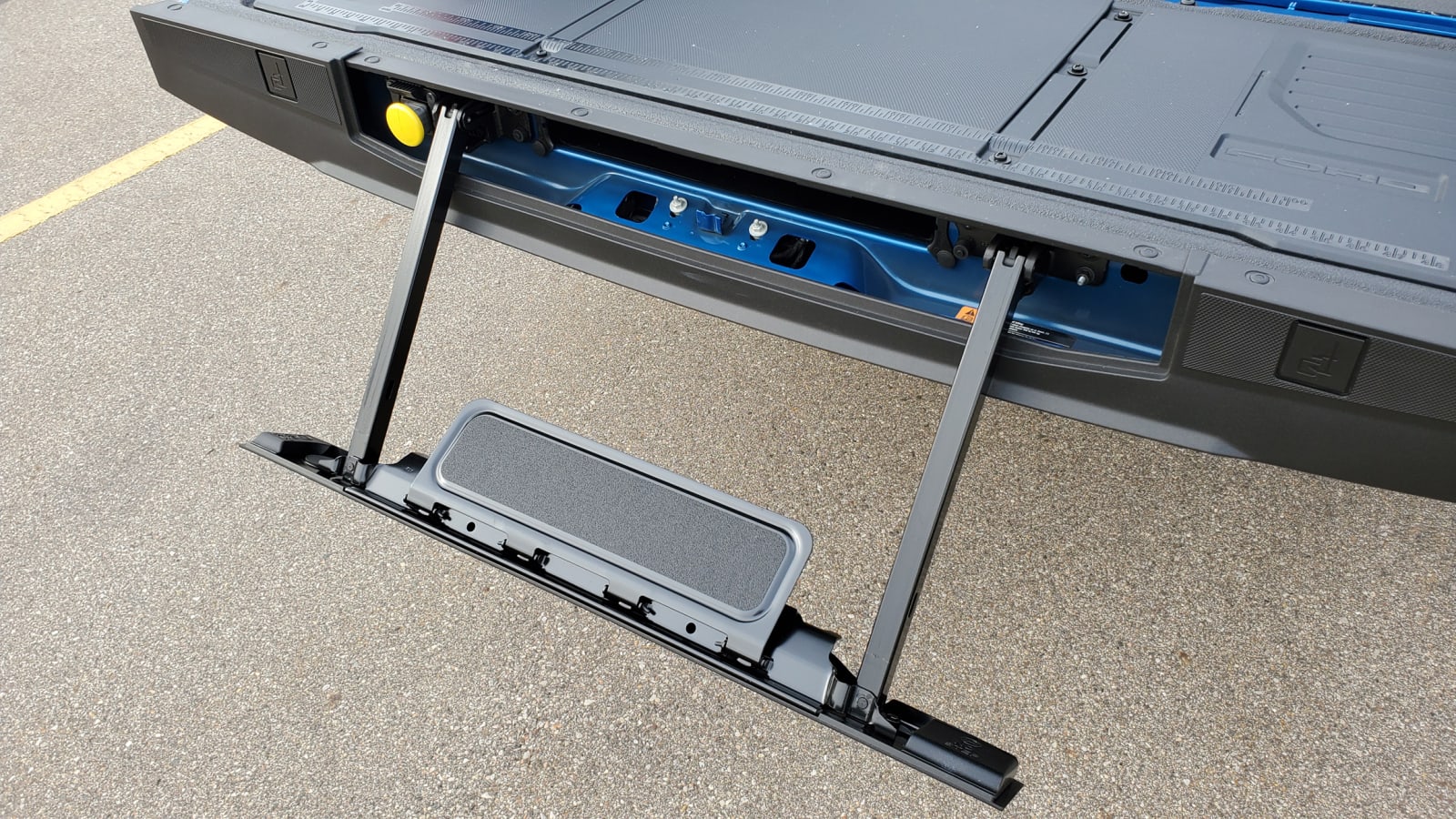 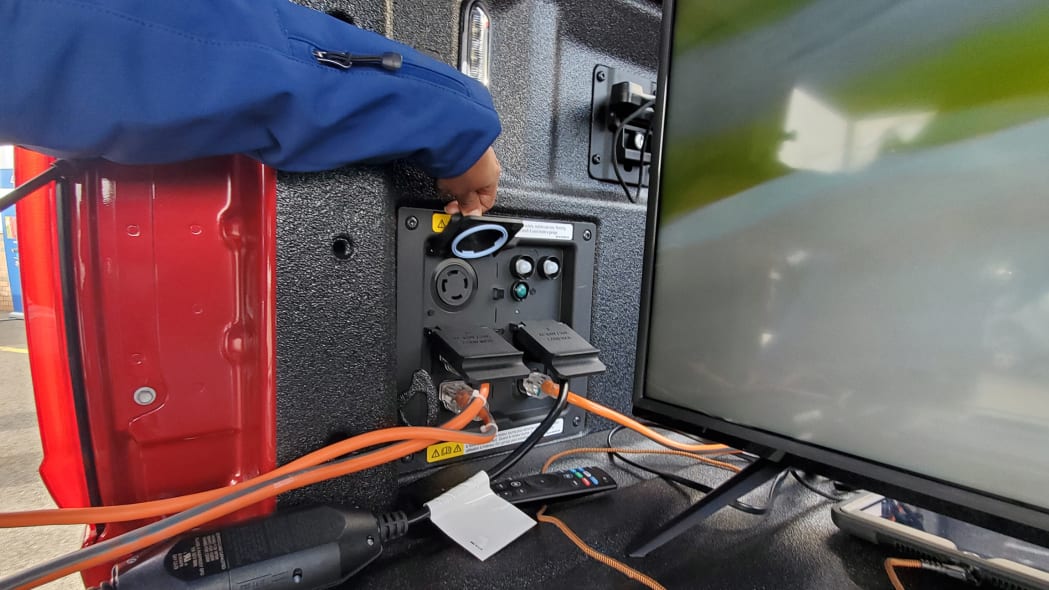 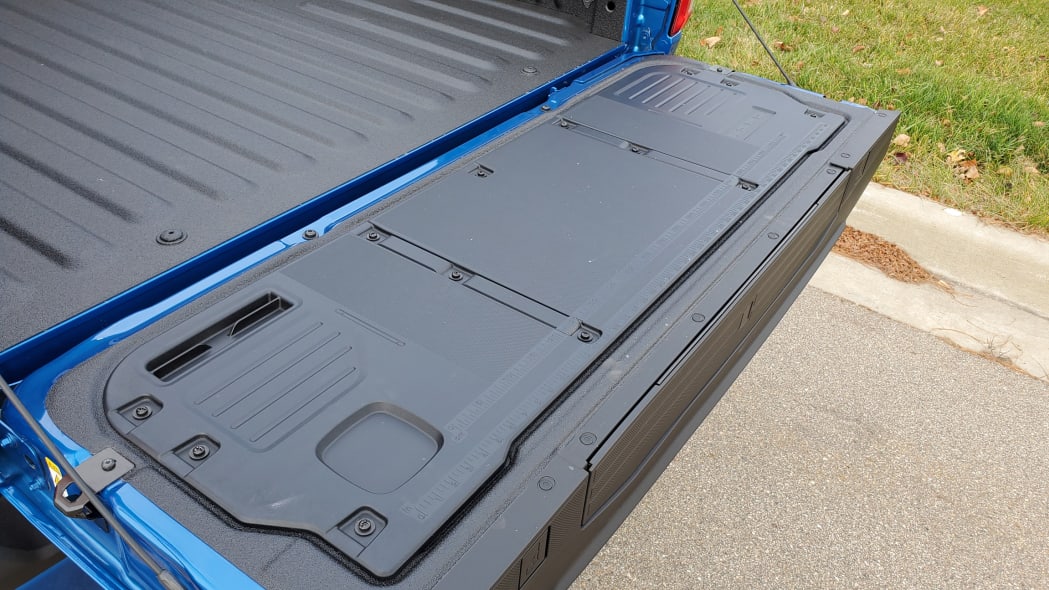 If anything, it’s a lot like piloting a half-ton pickup with a heavy-duty diesel powertrain, only without any of the nuisances associated with modern diesel ownership. And you get 24 mpg everywhere, as in both in the city and on the highway. That’s the same combined figure as the outgoing 3.0-liter Power Stroke diesel, which produces just 250 horsepower. Sure, that light-duty diesel will net you better highway fuel economy, but unless you exclusive drive on I-45, the hybrid will match it in the long-term. Gasoline is also much cheaper than pump diesel in most states, so it’ll be cheaper to fill.

By comparison, the 5.0-liter V8 feels like a dog. It’s far less responsive, to the point that it’s noticeable in around-town driving. Mash the accelerator and the Coyote will wake up, but it takes a lot more conscious prodding to get the 5.0 to behave anything like the hybrid, which requires no thought at all.

We also sampled the more volume-oriented six-cylinders, and while nothing about the the 3.3-liter nor the 2.7-liter turbo V6 is new, we have to acknowledge the latter’s excellent all-around performance. It offers plenty of grunt and feels great, especially in a short-wheelbase truck. We got to play around with one configured exactly that spec with 1,400 pounds of payload strapped to the bed, and found it to be supremely confidence-inspiring even through a relatively tight slalom on Ford’s skidpad. If you’re not in a position to spring for one of the F-150’s flagship powertrains, that 2.7L EcoBoost is the one to get.

For all of the 2021 F-150’s many updates, there’s really only one story here: PowerBoost. It’ll set you back as much as $4,500, making it the second-most expensive of the F-150 SuperCrew’s available engines and trailing the Power Stroke by $500. Even between that and its slight hit to total capability, this is a stunningly impressive powertrain. Ford’s hybrid system doesn’t just make the F-150 a better truck, it makes it a better office, a better campsite, and a better workspace. And, in your author’s personal opinion, it makes its driver a better citizen, and that’s just a nice little bonus in what is already a sea of upsides.