For some reason, the auto industry loves alphanumeric model names, even though many of them don’t make much sense and are less memorable than the perfectly good nameplates they replaced—looking at you, Kia K5 (formerly Optima). But when it comes to Ferrari’s 812 family, the automaker has some justification for giving these front-engine grand tourers a numeric designation. The first digit relates to the car’s power rating of 800 cavalli vapore—Italian for horsepower—which translates to 789 horses on this side of the Atlantic. And the 12? That corresponds to the cylinder count: These stunning prancing horses boast a melodious naturally aspirated V-12 housed between front fenders so perfectly shaped, they could have been carved by Michelangelo. The engine sends torque exclusively to the rear wheels in both the 812 Superfast coupe and the upcoming retractable-hardtop 812 GTS. And once the latter goes on sale in 2021, it’ll mark the first time in over half a century that Ferrari has given buyers the option of a 12-cylinder convertible. Compared with the Superfast, the GTS has a similarly sleek look, but its tail end incorporates two buttresses that house the roof-folding mechanism. According to Ferrari, they “visually embody a sense of forward thrust.” We can buy that, much like we can buy the name.

The 812 lineup gains a convertible variant. Called the GTS, the droptop shares much with the coupe, including its naturally aspirated V-12, its seven-speed dual-clutch transmission, and its 211-mph top speed. So you can rest assured it’s also superfast, even if that’s not part of the name.

Ferrari offers the 812 Superfast and GTS in a single spec that features carbon-ceramic brake rotors, 20-inch wheels, and, of course, an interior slathered in rich, aromatic leather. Buyers can of course select from a host of paint colors, interior trimmings, and wheel designs, but that’s about the extent of the customization. Which version to buy? There’s no wrong choice here. The coupe is lighter, making it the pick for track rats. It also offers significantly more cargo volume, given that its rear end doesn’t have to sporadically accommodate the roof panel. But for those who look good with windswept hair and who revel in long drives down the Pacific Coast Highway or through the Catskills, you’ll want to go with the GTS.

Ferrari’s 812s get their muscle from a 789-hp 6.5-liter V-12, which delivers a bracing 530 pound-feet of torque to the rear wheels via a seven-speed dual-clutch automatic. And true to the coupe’s name, the car is superfast, reaching 211 mph, according to the manufacturer. We’ve yet to drive the convertible 812, but the coupe holds a place among the quickest of the quick. In our testing, it sprinted to 60 mph in a mere 2.8 seconds. That’s a dazzling performance, even if it trails the McLaren 720S, which made the run in just 2.7 seconds. Ferrari claims the GTS should reach 60 about a tenth of a second behind the Superfast, likely owing to the necessary chassis reinforcements that make the convertible an estimated 265 pounds heavier than the coupe. We found the latter’s handling to be quite nimble for a near two-ton car. A few of our drivers noted that the dual-clutch transmission can provide some harsh shifts at times, but the engine note—unencumbered by turbos or a supercharger—makes up for it. This car is beyond mellifluous: Its exhaust note starts as a guttural growl and rises to an ear-piercing shriek. And the standard carbon-ceramic brakes bring this beast to a quick and decisive halt; the coupe needed just 142 feet to stop from 70 mph in our testing.

The 2021 Ferrari 812 Superfast chugs fuel, averaging 12 mpg in the city and 16 mpg on the highway per the EPA’s yardstick. The Lamborghini Huracán—a chief rival, albeit with a V-10—fares a bit better, returning 13 and 18 mpg, respectively, in those environs. During our time with the 812 Superfast, we managed only 11 mpg, two points shy of its 13-mpg combined rating. We’ve yet to get our hands on the 812 GTS but given its EPA ratings of 12 mpg city and 15 mpg highway, we can’t imagine it’ll impress in this area. And really, there’s no reason it has to.

The 812’s cabin provides seating for two, with reasonably spacious accommodations, good ergonomics, and modern design. Wishing for drivers to embrace the grand-touring nature of the 812 and keep their hands on the wheel at all times, Ferrari eliminated the typical steer-wheel stalks and instead put push-button controls for the wipers and turn signals on the spokes. As for storage space, the coupe outshines many competitors, offering 18 cubic feet of cargo volume. We can’t say the same for the convertible, though. The GTS’s roof-folding equipment cuts that down to a mere seven cubes. You’ll need to send most of your luggage on ahead.

All 812 coupes and convertibles come with a six-speaker stereo, but why listen to that when you have a built-in V-12 soundtrack? An integrated navigation system with a voice-activation feature comes standard along with Bluetooth phone pairing and music streaming. Owners can option to have Apple CarPlay capability, but Android users are out of luck.

Neither the 2021 Ferrari 812 Superfast nor the GTS has received an overall crash-test rating from the National Highway Traffic Safety Administration or the Insurance Institute for Highway Safety. And like a lot of supercars, neither offers much by way of driver-assistance features. Key safety features include:

Ferrari’s limited and powertrain warranties match the coverage provided by Lamborghini. However, the Maranello automaker sets itself apart by offering seven years of complimentary scheduled maintenance; Lamborghini offers nothing of the sort. 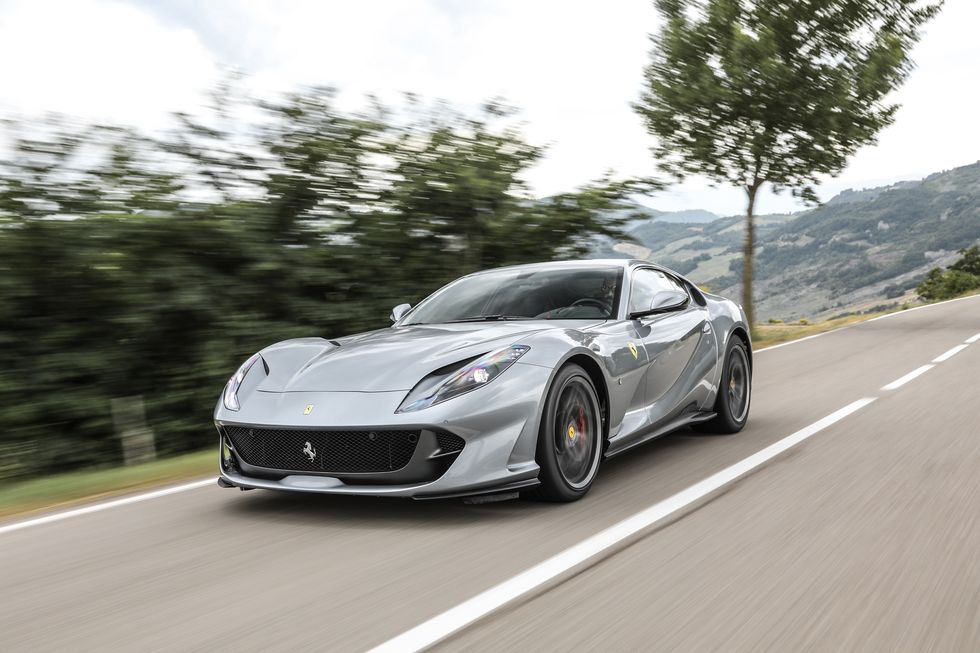