The 2021 Audi RS5 Sportback is the pinnacle of high performance and practicality, blossoming from the A5 and S5 family trees that also include coupes and convertibles. While Audi’s four-door Sportback variant is defined by its inconspicuous hatchback and big back seat, the RS5 is further enhanced by the most menacing visage and a mighty 444-hp twin-turbo V-6. Its charming powertrain and Quattro all-wheel-drive system help deliver zealous acceleration and enthusiastic responses. The Audi’s on-road demeanor also transforms from effortlessly docile to delightfully tenacious with the flip of a drive-mode switch. Although it isn’t as loud as we’d like, and its classy interior could be more inviting, the RS5 Sportback ranks among the most badass and high-class hatchbacks.

The RS5 Sportback gets an edgier appearance, updated technology, and additional features for 2021. The most obvious revisions to the outside are its wider front grille and redesigned headlights. The new RS5 also takes a couple visual cues from the iconic Audi Quattro, such as the three thin air vents above the grille. Inside, in place of the old car’s rotary controller and 8.3-inch display, there’s a large 10.1-inch infotainment touchscreen. What’s more, Audi is offering 20-inch wheels in gloss black or matte bronze, and there are two new exterior paint colors—Turbo Blue and Tango Red. The Ascari and Black Optic launch editions are also offered for 2021, but there will only be 100 copies of the former and 325 copies of the latter.

We think the new Sonoma Green metallic paint is the perfect hue to draw even more attention to the already assertive-looking Audi. We’d also choose the 20-inch five-spoke anthracite-finished wheels, which also requires the Black Optic package. This includes a set of summer tires and other gloss-black exterior accents. The Dynamic package tickles our fancy, too, thanks to its red brake calipers, specially tuned RS suspension, and throaty sport exhaust system.

The RS5 Sportback’s sole engine choice is a twin-turbo 2.9-liter V-6 that makes 444 horsepower and 443 pound-feet of torque. It pairs with a paddle-shifted eight-speed automatic transmission that routes that torque to all four wheels. Audi’s Quattro all-wheel-drive system not only maximizes traction, but it also can direct more torque to the rear wheels when needed. Our first drive revealed that the car is stable at autobahn speeds and a hoot to hustle around corners, with well-controlled body motions and predictable handling. The adaptive dampers provide a smooth ride in all but the sportiest setting, Dynamic. We also tested the RS5 Sportback at the track, where it hit 60 mph in 3.3 seconds and closed the gap between 50 and 70 mph in just 2.9 seconds. The audacious Audi ripped down the quarter-mile in just 11.8 seconds at 115 mph. These results show that the RS5 can hang with the more powerful 505-hp Alfa Romeo Giulia QF. They also reveal the benefit of all-wheel-drive traction, which helped the Audi’s takeoffs compared with those of the rear-drive Alfa.

The EPA estimates that the RS5 Sportback will earn 18 mpg in the city and 25 mpg on the highway. Compared that with the Giulia QF’s ratings of 17 mpg city and 25 highway as well as the Mercedes-AMG C43’s 19 mpg city and 27 highway. We ran a 2019 RS5 Sportback on our 75-mile highway fuel-economy route, which is part of our extensive testing regimen, where it earned 26 mpg.

Inside, the RS5 Sportback shows off the company’s typically sophisticated design and exemplary build quality. The driver faces a handsome flat-bottom steering wheel, behind which sits a large 12.3-inch digital gauge cluster. A pair of stubby paddle shifters are mounted on the wheel, should you have the sudden desire to drop a gear and hear the engine roar. The RS5’s cabin is also highlighted by intricately stitched seats that feature heated and cooled surfaces as well as massaging functions for front-seat passengers. The car’s lengthy roster of standard equipment includes ambient interior lighting, a panoramic sunroof, and three-zone climate control. Those who want even fancier amenities can opt for a head-up display and nappa leather upholstery. Of course, the Sportback’s longer dimensions and four doors make it a more practical alternative to the RS5 coupe. While the Sportback still isn’t ideal for transporting five people, its rear seat is roomy enough for two, even if its sloping roof intrudes on headroom back there. And the hatch provides more cargo space than the coupe.

Unlike the new MMI infotainment interfaces featured in the Audi RS7 and RS Q8 crossover, which have dual touchscreens entombed in their dashboards and center consoles, the RS5 Sportback has a single 10.1-inch touchscreen that protrudes from the middle of its dash. Not only is it bigger than the 8.3-inch display that it replaces, but the new system is no longer manipulated through the rotary controller and touchpad that once lived on the car’s center console. Despite the switch to mostly touch-sensitive controls, the setup responds quickly and has large icons that are easy to activate without much distraction. Every model comes with Apple CarPlay and Android Auto compatibility, built-in navigation, and wireless charging. A more powerful Bang & Olufsen stereo is optional.

The 2021 RS5 Sportback hasn’t been fully crash tested by the National Highway Traffic Safety Administration (NHTSA), and it hasn’t been evaluated by the Insurance Institute for Highway Safety (IIHS). The four-door hatchback can be equipped with driver-assistance technology such as adaptive cruise control, automatic high-beam headlights, self-parking assist, and more. Key safety features include:

Audi has competitive limited and powertrain warranties that align with high-performance luxury rivals from BMW and Mercedes-Benz. But while the company provides more complimentary maintenance than Mercedes, it’s nowhere near what BMW offers. 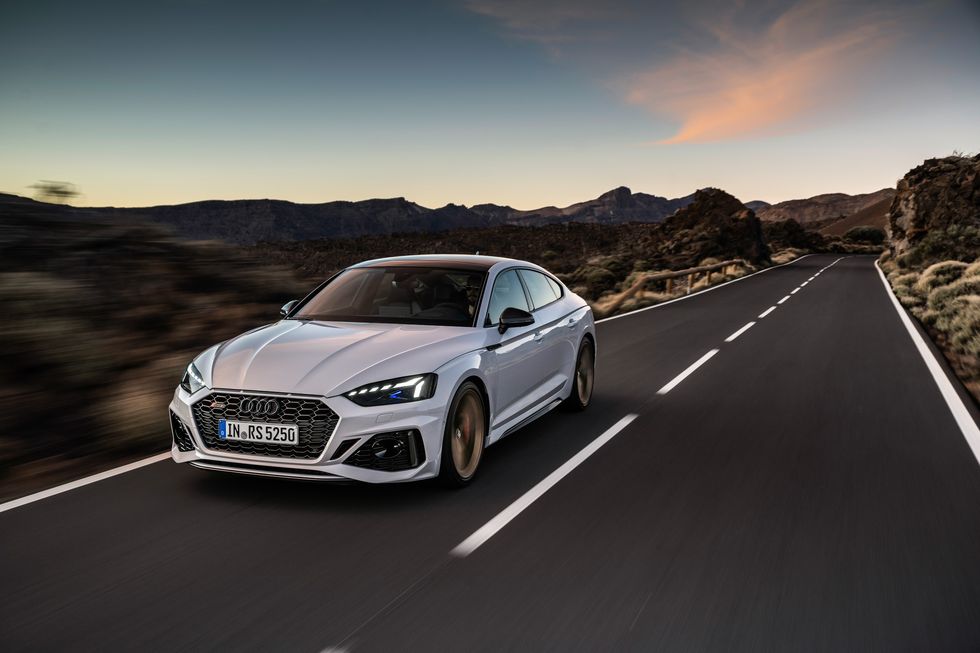