The 2021 Audi e-tron and e-tron Sportback are all-electric luxury crossovers that straddle the line between the present and the future. While their battery-powered, all-wheel-drive powertrains deliver up to 222 miles of EPA estimated driving range and foreshadow the death of internal-combustion engines, their refined driving manners and serene interior spaces are similar to the non-electric Audi models currently occupying showrooms. These recognizable traits as well as their traditional exterior designs make the e-trons appear less revolutionary than luxury EV rivals such as the Jaguar I-Pace and Tesla Model X. Although the 2021 e-tron and e-tron Sportback have shorter driving ranges than the Jaguar or Tesla, Audi believes this more conservative approach will make the transition from traditional gas-fed models to all-electric vehicles easier for buyers.

For 2021, Audi introduces a more affordable base model that features the Premium designation. Available on both the regular and Sportback e-tron, it costs about $9000 less than the mid-level Premium Plus. It can also be equipped with the Convenience Plus package, which includes driver assists such as adaptive cruise control. Audi also improves the e-tron’s available battery capacity and efficiency. The regular e-tron now has an estimated driving range of 222 miles—18 more than its predecessor. The Premium Plus trim adds dual charging ports, too, so there’s now one on each side of the vehicle.

We like the price point of the entry-level Premium trim level, and pairing it with the sleeker Sportback helps the e-tron garner more attention. This combination benefits from upscale standard features such as 20-inch wheels, blind-spot monitoring, heated front seats, four-zone climate control, leather upholstery, and a panoramic sunroof. We’d add even more desirable equipment with the optional Convenience Plus package that brings black exterior trim, adaptive cruise control, lane-departure warning, and a 360-degree camera system. We’d also opt for the Tow package to utilize the e-tron’s 4000-pound towing capacity.

Beneath the e-tron’s heavily creased bodywork are two electric motors, one located at the front axle and the other at the rear. Together they provide electronic all-wheel drive, but the rear motor does most of the work. In regular driving situations, they make a combined 355 horsepower and 414 lb-ft of torque. However, putting the transmission in Sport mode briefly unlocks 402 ponies and 490 lb-ft. Our initial driving impressions revealed that the e-tron was swift and composed. Its snappy acceleration is typical of electric vehicles, and the smooth and quiet ride quality confirmed its luxury bona fides. Its stopping system expertly blended its traditional brakes with the obligatory regenerative braking system. However, we were disappointed that its regen wasn’t aggressive enough to enable one-pedal driving during our test of the Sportback model. Still, the e-tron demonstrates traditional SUV characteristics with the ability to tow up to 4000 pounds.

The regular e-tron has an EPA-estimated driving range of 222 miles, and the Sportback version is rated at 218 miles. The former figure is higher than before, but both versions still trail rivals such as the 2020 Jaguar I-Pace (234 miles) and the Tesla Model X Long Range (up to 371 miles). Every e-tron is compatible with 150.0-kW DC fast-chargers that allow it to replenish 80 percent of its battery in about 30 minutes. Those using a more conventional 240-volt outlet will be able to fully charge the e-tron in about nine hours.

The EPA estimates the 2021 e-tron will earn 78 MPGe combined. The Sportback model is rated slightly lower at 77 MPGe combined. We tested both body styles on our 75-mph highway fuel-economy route, which is part of our extensive testing regimen. The regular e-tron returned 67 MPGe and the Sportback returned 75 MPGe. For comparison, the last I-Pace we evaluated achieved 64 MPGe in the same test.

The e-tron’s most impressive technology is its electrified systems, but the five-seat crossover also has a cutting-edge and practical cabin. Its dashboard is packed with multiple high-resolution screens that include Audi’s digital gauge cluster—called Virtual Cockpit—and two flush-mounted touchscreens in the center. Of course, there are a variety of upscale options such as a head-up display and massaging front seats to further round out the e-tron’s sophisticated interior, which benefits from a flat floor thanks to its neatly packaged underfloor battery pack. That helps provide the regular e-tron with a commodious cargo area that measures 29 cubic feet behind the back row and 57 with the seatbacks folded flat. The Sportback’s sloping roofline reduces both figures by 2 cubes, but we still fit seven carry-on suitcases behind its rear seats—one less than in the regular e-tron.

Every e-tron’s infotainment system runs through dual touchscreens, with a 10.1-inch display on top and an 8.8-inch unit below it. While the upper screen provides access to the standard Apple CarPlay and Android Auto apps as well as the available Bang & Olufsen audio system, the bottom screen is mainly used for controlling the climate settings. Along with several power points, the system also features a subscription-based Wi-Fi hotspot; a wireless smartphone charger is optional.

The 2021 e-tron and Sportback both earned five-star crash-test ratings from the National Highway Traffic Safety Administration (NHTSA), but neither 2021 model has been evaluated by the Insurance Institute for Highway Safety (IIHS). They do offer an array of standard driver-assistance technology, and they’re available with adaptive cruise control and self-parking assist. Key safety features include:

Audi provides a competitive albeit unremarkable limited and powertrain warranty. While its complimentary maintenance is much shorter than what the I-Pace has, the e-tron’s electrical components are covered for the same amount of time. 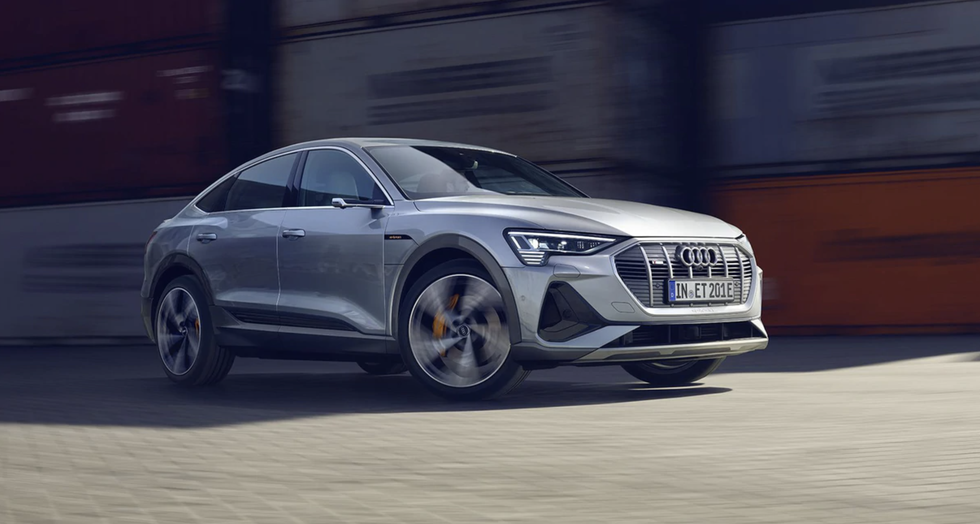