We try not to anthropomorphize cars, but sometimes it’s almost impossible to resist. Look at the Honda e’s front end and tell us that you don’t see a face—those circular multi-element headlights and the flat panel that connects them creating an expressive look that evokes Hollywood’s cuter robots. While Honda says the e’s aesthetic inspiration came from the first-generation 1973 Civic, our impromptu focus group of preteens cited similarities to the robotic heroes of Wall-E, Next Gen, and Big Hero 6.

Though adorable and innovative, the e is destined to remain a foreign-market novelty, with Honda having no plans to bring it to the United States. Blame for that lies with our limited enthusiasm for small cars and non-Tesla EVs, particularly ones that offer a real-world range of 100 miles or fewer. Which is why, to find out what we’re missing out on, we drove an e Advanced in the United Kingdom, explaining both the XL license plates and the fact the steering wheel is on the right.

Honda is not following the herd with the e. Unlike the Mini Cooper SE, its most obvious rival on price and range, the Japanese company hasn’t electrified an existing model. The e sits on its own rear-driven architecture, taking advantage of the packaging and dynamic possibilities of an electric powertrain. Honda opted for a relatively small 35.5-kWh lithium-ion battery pack to help reduce both mass and cost. We’re told the e is designed for urban use and life in a charger-rich environment. According to Honda, the more powerful 152-hp e Advanced weighs nearly 3400 pounds, 66 pounds more than the basic 134-hp version. That makes the Advanced roughly 300 pounds heavier than the Mini SE, but the Honda offers more interior space and four-door practicality.

It also includes the sort of technology you’d expect from the company that gave us ASIMO. Indeed, the level of gadgetry verges on overwhelming, with the e’s toys and features seeming to hail from a more advanced future. The cabin’s design could be described as retro-futuristic, with our test car featuring wood across the top of the dashboard and grey cloth trim reminiscent of 1980s Japanese cars. But Honda also fitted wall-to-wall screens, an unbroken row of five digital displays extending across the front of the cabin.

The e lacks conventional door mirrors—both European and Japanese regulations allow it to use a camera-based system—so the outermost screens display the view from the rear-looking cameras. Those remain operational for some time even after the car has been switched off, so you can check for traffic before opening a door. Ahead of the driver is a digital dashboard relaying the basics of speed, charge level, and the rate of power flow into or out of the battery. In the center, twin 12.0-inch touchscreens command the infotainment system. When the car is stationary, you can set aquarium mode to fill the screens with beautifully rendered virtual fish. Why? We’ve no idea, but it sure is pretty.

Like the Mini SE, the Honda prioritizes fun over range maximization. The 17-inch alloy wheels are wrapped with Michelin summer tires in place of the low-grip eco-rubber normally fitted to junior EVs. The e is commendably lacking in noise and harshness, remaining near silent even under full acceleration, driving with a precision familiar from the company’s internal-combustion models. Steering is crisp, chassis responses linear, and grip levels impressively high. Tail-out drift antics are off the table (for now), with stability control intervening invisibly to prevent the 232 pound-feet of torque from ever overwhelming the rear tires. Suspension settings are soft, with noticeable lean under hard cornering, but the ride is pliant and well damped, and overall the e feels much more agile and lighter on its feet than EVs normally do. The ultra-tight 14.1-foot turning circle also gives impressive maneuverability on tight city streets.

Performance is brisk at urban speeds—with the accelerator pedal delivering an instant surge—but tailing off beyond 60 mph. The e will cruise at 75 mph or even quicker, but at the cost of watching the range display dropping miles much faster than the odometer adds them. Honda claims the top speed is limited to 90 mph, at which point the flow meter indicates that power is being wound back. In addition to a one-pedal driving mode, the e also has paddles behind its steering wheel, which can be used to vary the level of regen when coasting.

The e’s modest battery is sized for short trips and frequent charging, and the U.K.’s still-limited charging infrastructure meant that range anxiety was a constant factor. Even with the battery fully replenished, the onboard computer never estimated more than 90 miles to empty. Getting close to that figure required gentle use and a mostly urban diet. Charging the battery from empty to 80 percent took around three and a half hours using an 11-kW AC charger, but DC fast charging can reportedly accomplish that feat in 30 minutes.

The e’s adaptive cruise control system—which is meant to combine lane-keeping with distance regulation—also really struggled with Britain’s lane markings and frequent absence of them. The video rearview system worked well in daylight but was predictably grainy and indistinct at night. The e also gets a video rearview display at the top of the windshield, but this suffered from a narrow field of view and was soon clicked into its conventional mirror position. The rear seat space is limited with adults in the front, and the trunk is both tiny and largely filled by the high- and low-speed charging cables.

We are disappointed that Honda is not selling the e in the U.S, but we can understand the logic that denies it to us. In the United Kingdom the e Advance costs about $38,000 at current exchange rates, and it’s not as if the $37,495 Chevrolet Bolt has been flying off the lots in the States, despite having more than twice the range. But while it might not be for us, the e still proves that Honda hasn’t forgotten how to combine pioneering technology with a sense of fun. 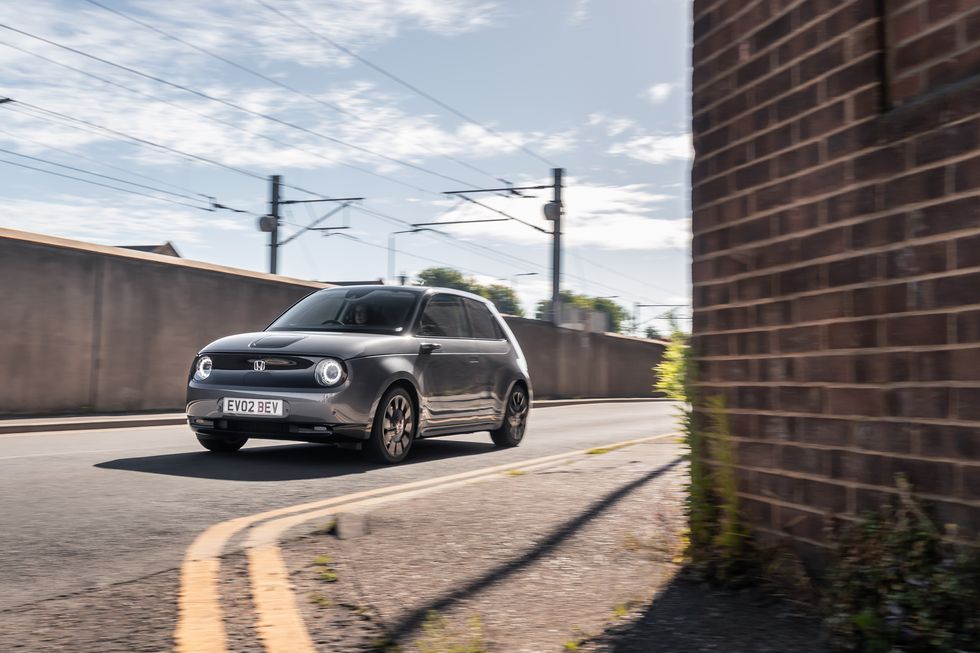