From the March 1973 issue of Car and Driver.

Honda has finally become a car builder. Contrary to what your neighbor may have told you, the 600 sedans and coupes you see nipping around the ankles of Buicks and Biscaynes on the Los Angeles freeways are not cars. And neither was the old imitation-Sprite sports car that everybody (including your Honda dealer) has forgotten about by now. All of those devices were more like enclosed motorcycles—with four wheels as a concession to riders without balance—and they never really fooled anybody. But Honda is canceling out of the semi-car market now. As soon as the dealers roll their current supply of 600s out the door the transition will be complete. Because, waiting to take its place, is the new Civic, at $1973 P.O.E. a serious contender in the under-$2000 real car market. . . and, if the automotive price spiral continues, perhaps the only contender before long.

As an introduction, let us tell you that there is absolutely nothing radical nor innovative about the Civic. And that should be reassuring beyond measure to all of you potential customers who failed to appreciate the racket of the 600’s unique air-cooled, upright 2-banger engine. Or who couldn’t quite master the clever dash-mounted shifter. Nor is the Civic another one of those Japanese micro-cars that tremble fearfully as they cut through the bow wave of a Peterbilt. Instead, it’s what Honda likes to think of as the perfect urban car (hence the name Civic, if you can follow that logic). But before you can finish stuffing the Civic into that pigeon hole, Honda spokesmen are quick to point out that it’s perfectly at home on freeways and cross-country expressways as well. Another half-size car for all seasons . . . if we are to believe the manufacturer’s glossy descriptions.

Better that you should see the Civic as an urban car, we think, and that recommendation is based purely on its size. At 139.8 inches in overall length it fits in about halfway between the true micro-cars (Honda 600 and Minis) and what Americans tend to think of as standard little cars (Fiat 128, Datsun 1200 and Toyota Corolla). And along with these compact dimensions is a corresponding light weight (1536 lbs.). In crowded metropolitan areas the advantages of such a miniature automobile are obvious. The Civic’s maneuverability and economy are exceeded only by a motorcycle. But those credits are transformed by laws of physics into debits on the open highway. Gusty breezes feel like gale force winds and while the Civic may not tremble fearfully in the bow wake of a semi, it does cringe noticeably. None of that is bad engineering. It’s just an inherent quality of small cars . . . and the reason they are best suited to urban service.

Earlier it was mentioned that there is nothing radical about the Civic’s mechanical layout. It is, in fact, absolutely conventional in the Mini/Austin America/Simca 1204 mold of small cars. The Civic’s in-line, 4-cylinder engine is transversely mounted in front where it drives the front wheels. The suspension is independent all around, in this case done with MacPherson struts and coil springs. The transmission is a 4-speed, all-synchro device with a 2-speed Hondamatic optional. Brakes are discs in front, drums in back, and power assisted. All of this machinery is attached as simply and efficiently as possible to a passenger carrying compartment of four persons capacity. The idea is to keep mechanical intrusions to a minimum and Honda engineers have been particularly successful in this because, in addition to the absence of a drive-line tunnel which is inherent in this type of design, the wheel arches are also commendably small. The Civic is perhaps the only car of this size in which the driver doesn’t have to angle his feet toward the center of the car to avoid the left front wheel housing. And it also has a full-width rear seat. So, in general, the Civic scores excellent marks in space utilization.

There are limitations however. The front seats are fine. They are comfortable with reclining back rests and a good range of fore-and-aft adjustment. Adults in the six-foot range will have no complaints about leg, hip and head room. But the same cannot be said for the back. By compromising front leg room somewhat the same adults will be able to accommodate their knees in back but there is no solution to that lack of rear head room. About 5’10” is the height limit for rear seat passengers. Which strikes us as a poor trade off. Little shoe box sedans do not rely on beauty for their appeal and even if they did, ballooning the Civic’s roof up an extra inch or so wouldn’t have destroyed what the critics would call classic proportions. But it would have made the car more useful and that, it would seem, is what this kind of machine is all about. 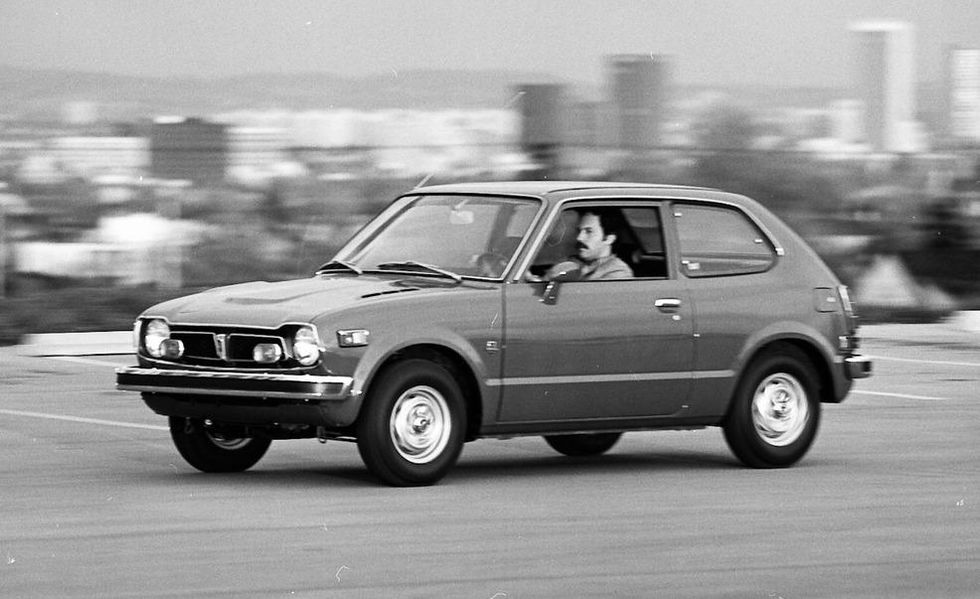